PU Results: Crucial, but Not End of the World

Results of 2nd PUC / 12th standard are awaited in Karnataka. May be, in some other states too, the situation is the same. Hope the results may be on expected lines for all. For those of my young friends who consider PUC/12th result is most crucial factor in life, and if by chance fail or get less marks and feel that everything is over, I request them to read below my own experience.

It was the year 1978 and the month May. Exactly 40 years back I too was a student of 2nd PUC. I answered my final exams and waited for results. Those days exams were generally in April and normally the results were announced in May. CET (Common Entrance Test) was not yet in practice then.

School Topper in 7th and 4th in SSLC:

I was born and brought up in Pangala village of Udupi taluk. My father was a merchant navy employee of the British East India Navigation Company and he was sailing in various ships since 1941(during 2nd world war) till his retirement in 1981. For every 9 months of work he had 3 months of leave. (The writeup about his ‘unfortunate missing’ due to the German bombing was published in 2012 in media including daijiworld portal. He passed away on December 6, 2013). My mother died when I was just 3 years and 3 months young due to pregnancy related issues at the age of 29. My father did not marry again.

I had completed 7th Std at St John’s Higher Primary School, Shankerpura as the school topper. Completed SSLC (10th Std) at Shri Vishnumoorthy Hayavadana High School, Innanje securing 4th position in the school. (SVH High School is run by Sode Math of Udupi). We are 3 children. My elder brother and I were staying with my grandmother and uncle until my high school. Our eldest sister had then joined the Mercy of the Holy Cross Sisters Congregation at Hazaribagh, Bihar (Jharkhand).

I had joined 1st PUC (pre-university course) for the Science stream at Poornaprajna College, Udupi (run by Admar Math Education Council). My brother too was doing his final BA there. We were staying in a rented room adjacent to Udupi Court Complex (Opp. Hotel Usha) in Udupi. As my brother completed his BA degree I stayed alone during my 2nd PUC studies.

In the evenings I watched a number of movies in 3 theatres of Udupi (normally last show). Apart from this I had no other bad habits. My class attendance and internal test results were good. I was dreaming to pursue engineering (BE) studies. During those days to study BE there were only 2 colleges in the undivided Dakshina Kannada. One was at Suratkal – Karnataka Regional Engineering College (KREC) – at present NITK. The other one was Manipal-MIT (Manipal Institute of Technology). There were only merit seats at KREC and at MIT there were payment seats too. I had brought application form of MIT ahead of PUC final exams. 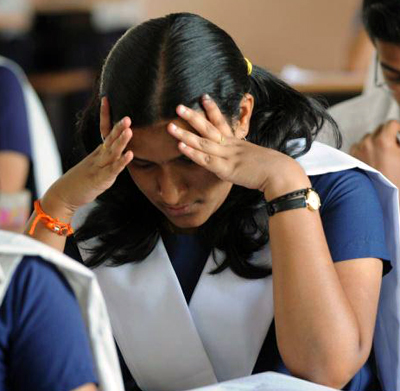 The PUC exams commenced as usual. But one or two days after the Mathematics exam, it was announced that the Mathematics question paper had leaked before the exam and hence re-examination would be conducted. About 15 days later re-examination was conducted. The re-exam question paper was tough as if it was set to take revenge of the paper leakage. In May results were announced. Though I was good in other subjects, I had secured only 28 marks in Mathematics and I had 'failed'!

My dad was in the ship and during those days the only mode of communication was through letters. It would take at least 2 months for a communication through letters because he was sailing. My brother did not scold me on seeing my results. He did not even reveal my results to anyone. He went to PU examination Board office in Bengaluru and procured copies of my answer sheets with a hope that there were some omissions/miscalculations. But everything was perfect. Even if I had got 2 more marks I would have passed by the addition of ‘grace marks’.

Like my brother I too was not disturbed by my results. During those years, supplementary exams were held in October which meant loss of an academic year. As we both decided not to waste a year I joined Karnataka Polytechnic (KPT), Mangaluru to pursue engineering diploma of 3 years. I would have got admission in any branch (as I had good marks in SSLC - 72%, good enough during those days), but I chose chemical engineering. In October the same year I appeared for PUC pending paper and cleared. Along with my diploma studies I started participating in youth activities both in Mangaluru and my native – Pangala / Shankerpura. After 3 years of studies, I passed diploma in chemical engineering with 4th Rank!

Those days Mangaluru Chemicals and Fertilizers Ltd (MCF) at Panambur was managed by the government of Karnataka. I had good contacts with the then youth leader Oscar Fernandes of Udupi (former central minister, present Rajya Sabha MP) since my PUC days and because of his intervention I was recruited in MCF in 1982. Thereafter I stayed at St Christopher Hostel, Rosario, Mangaluru. I was working in shifts since the factory runs round the clock. There was lot of free time at my disposal.

By that time, I was being recognized as a youth leader both in Mangaluru and in Pangala / Shankerpura. I was also involved in various activities without caste and creed. When I was studying in KPT, I had founded Young Technician Movement (YTM) for KPT /ITI students at Canara Communications Centre(CCC), Mangaluru under the guidance of Fr Stanley R Pereira (now deceased) and Fr Henry D’Souza (now bishop Henry of Ballari diocese), both were directors of CCC. In the Diocesan Central Council of Catholic Youth Movement (CYM) I had occupied posts like ‘Yuvak’ Bulletin editor, general secretary and president (for 3 terms) and re-launched ‘Amcho Yuvak’ monthly. I had edited it for 6 years. In 1988 I got an opportunity to participate in the youth activities for about 2 months in France and Italy as a member of Indian delegation of the Youth Commission of Catholic Bishops’ Conference of India. Later I had held post of the secretary of the Pastoral Council, diocese of Mangaluru for 6 years (first lay person in Mangaluru to hold that post). I was the secretary and vice-president of Pangala parish, president of Nagarika Samithi (Citizens’ Council), Shankerpura, chairman of Rotaract Club, Kaup, president of Rotary Club, Shankerpura, secretary of Kattikere Jala Kreedabhivriddhi Samiti, Moodabettu-Katapady (which had conducted DK district level swimming competitions) etc.

I was totally engaged in my work at MCF and social/cultural activities in different fields. I was regularly writing in various Konkani periodicals. In 1985, I came in contact with a brilliant and talented girl hailing from Mudarangadi. She was from a family of agricultural background. She was studying in Roshni Nilaya, Mangaluru in 2nd year BA. She was participating in programmes of All India Radio from her high school days. Inspired by her, I continued my education and obtained BA degree of Mysore University through correspondence course. By then she had joined Mangaluru University for MA (economics). I joined Shri Dharmasthala Manjunatheshwara Law College, Mangaluru for the morning batch and studied for law degree of 3 years and obtained LLB in 1991. During the law college days I was actively involved in many of the activities including contesting for the students’ union.

After 7 long years of acquaintance I entered into matrimony with my fiancé, Concepta Fernandes, on January 1, 1992. The then bishop of Mangaluru Basil S D’Souza solemnized our nuptials at Pangala Church. After our marriage we continued education through Distance Education scheme of Dharwad University. She obtained MA in English literature (her 2nd MA) and I obtained MA in political science. As years rolled by, and as I obtained degrees one after the other continuously even though I was working in a factory and involved in various activities, I realized the fact that education in humanities would suit me better.

My one more ambition was to move towards self employment. In 1994 May, resigned well paying MCF employment (of course many had suggested me not to do so) and started ‘Maria Advertisers’. All these years I am happy and contended in my advertising business mainly dealing with daily news papers / periodicals.
Each one’s talent is different:

We have 2 children. Son completed his BE (Mech) with distinction at St Joseph Engineering College, Mangaluru and presently pursuing MTech at Manipal Institute of Technology (MIT), where I had dreamt of studying. He was a member of the team of students of SJEC which designed the Coffee bot (The news item of the same had appeared in New York Times too). He has great aptitude in Science / Technology.

Our daughter had joined PUC at St Aloysius PU College for Science stream, since many of her friends opted for the same. But soon, luckily, she realized lack of aptitude in science subjects though the teaching was good at the college. She continued in the course and passed out with distinction, with a 100% in Statistics. She even appeared for CET, without any coaching just to test her abilities, and there too her rank was quite good and she would have got Engineering seat easily under CET quota in a reputed college. But she pursued BBM education at SDM Business Management College, Mangaluru with distinction. She actively took part in curricular and co-curricular activities and was adjudged ‘Best Outgoing Student’. Now she is preparing for pursuing masters in management.

Having self experienced, my piece of advice to parents is that recognize the talents of your wards and motivate them to that direction. Don’t pressurize them to study the courses of your choice. Let them choose the stream which really suits to them.

My dear young friends who have answered 2nd PUC exams and waiting for results or have received results already, there is no doubt that PUC / 12 Std is a crucial stage of life. Science (now even Commerce) is the most sought after stream for many students, and more than that for their parents. If you have inclination towards science, go ahead. If you have opted for science under pressure, given exams and dreaming of good results, God forbid if the results are not up to your expectations, don’t panic , stop for a while, calm down. Understand the fact that world is wide and there are plenty of opportunities waiting for you. Acquire them and build your life in that direction. Please read my own example given above once again.

I had an ambition to live in our own (undivided) Dakshina Kannada. If I had passed in Mathematics in the first attempt in PU, perhaps I would have studied Engineering degree, and in search of a greener pasture might have settled in any part of the world. All these years I have been enjoying my life as a known person to many in the length and breadth of Dakshina Kannada. I have got a compatible life partner with a similar wavelength. Our children enjoyed the freedom to choose what they wanted to study. As parents we provide them with proper guidance and moral support.

Now 4 decades have elapsed for my PUC results through which God has shown me different path. Though it was bitter experience to me at that point of PUC result, as years rolled by I have marched ahead by sipping sweetness of life by developing the mindset of receiving whatever comes our way of life. Wish everyone all the very best in life. Stay blessed.

Title: PU Results: Crucial, but Not End of the World