In a flash, Tina’s left hand reached out for the purple cloth bag falling off her lap as her right hand struggled to grab the metal rod. That was a sharp turn and sitting on the side seat next to the driver made it worse. But then, it was Mangaluru and rash driving was common here. As she was checking if all the contents of her bag were intact, she heard, “sarry.” Looking up she saw the hazel-eyed driver offering an apologetic smile while gesturing to be excused for the inconvenience caused.

Tina nodded in acknowledgment but didn’t smile back. After all, her mother had warned her about strangers, especially men, before she had left home to pursue her nursing degree. Tina’s grades were good and she had secured a seat in one of the city’s best colleges. Though her mother had been reluctant to let her stay in a hostel miles away from their small town, Tina’s father had been supportive. 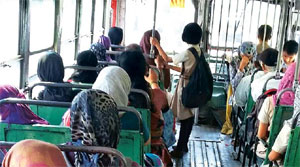 “Kaikamba, Kaikamba, Kaikamba,” called out the conductor as he walked down the aisle, indicating the next stop was minutes away. Standing on the footboard, he leaned out, propping his hand against the inside of the bus for support. Suddenly, he blew a
silver biggil held tight between his lips, bringing the bus to a halt. A young mother with a baby who must have been no older than a year boarded. Tina shifted to the left motioning the lady to sit down. She smiled at the baby who was now flashing a toothless grin. It was as if they’d known each other forever.

The driver turned around every now and then, smiling at their animated interaction. He removed a Cadbury Eclairs from his khaki shirt pocket and offered it to the baby. Tina read the print on his metal badge. Mohamed Ismail. He caught her staring at him and smiled. This time, she smiled back.

Mohamed Ismail was handsome and had dark brown hair that contoured his face up to his chin. He kept running his long fingers through his mane every now and then, brushing away stray strands that obstructed his vision. Tina watched him drive, impressed by how he controlled the steering wheel using only his right hand. She observed how his thin lips curved to expose the crater-like dimple on his left cheek. She gawked helplessly at his sharp jawline, a trait she found very attractive in men.

Catching herself in the act, Tina shook her head, letting out a soft chuckle of disbelief at her own courage. She wasn’t always this brave. In school, whenever she’d see a boy or group of boys walking in her direction, she’d turn and go the other way. Tina had only two friends, both girls; Shanti and Fatima. “Ee voltha nachikeda ponnuyaa! Naachike budu. Onthe bindaas avod. Like bold and beautiful, ponne.” Shanti, the most outgoing of the three, would say to Tina. But Tina was happy in her reclusive world of books and sometimes, desserts. A true blue Mangalurgaar, she relished the local sweet treats like gadbad, pomegranate milkshake, elaichi milk…

Moving to the city and staying independently had helped her shed away her shyness. She had become more assertive and learned to stand up for herself. Like this one time, when one of her roommates stole another of her roommate’s tuition money, Tina had confronted her and, on not succeeding to retrieve the cash, hidden all of the accused’s lingerie.

A cacophony of honking jolted her out of her reverie. “Oh! These bus horns,” thought Tina. “Someone really needs to complain about them and change them to a less revolting decibel.” The bus halted yet again and a few more passengers got off. Waiting for them to debus, Mohamed Ismail reached out for the bottle of water in the door pocket. Seeing it empty, he put it back and wiped away the beads of sweat on his forehead. It was somewhere between April and May, and the heat was unbearable.

Noticing that he was thirsty, Tina reached out for the bottle of water in her bag. “Surely, it wouldn’t be too much if she were to offer him some water,” she thought. “The man was thirsty after all and it was peak summer.” She hesitated for a few more seconds but then, realizing that the bus was fairly empty by now, got the better of her nerves and held the bottle out to Mohamed Ismail. “Thanksaa,” he said, smiling gratefully but refusing. How could he accept her kind gesture? Wouldn’t it be inappropriate? Seeing him shy, Tina felt a little more confident and insisted. Finally, he agreed and took a few sips.

The sun was setting now but the humidity persisted. Thankfully, they would reach the Moodubidri bus stand soon. It had been a long day but for Mohamed Ismail it was far from over. He had another trip to make before he could call it a night. He drove, his eyes fixed on the road in front of him, but his mind wandered. He didn’t know her name but was smitten by her simplicity and beauty. Seeing her white coat, he guessed she might be a nursing student; educated, unlike him. Mohamed Ismail had begged his mother to let him continue school but being a single mother of five hadn’t been easy. And so, the oldest of the lot, 14-year old Mohamed Ismail had been forced to take up a job at the local restaurant. Since then his life had pretty much revolved around raising his siblings. He had responsibilities. There was no time to pursue dreams; no time for love or any other distraction.

A Bollywood ringtone broke Mohamed Ismail’s chain of thoughts: ‘Mere rakshe kamar, tune peheli nazar se nazar jo milayi mazaa aa gaya.’ Tina fidgeted to remove her mobile from inside her jeans pocket. “Attan yetan, mummy. Moodubidri paavlin,” she said and, disconnecting the line, stuffed the phone back in. The bus pulled into the bus stand. “Karkala, Karkala, Karkala,” cried out the conductor ushering in a new crowd of impatient passengers. Tina looked back one last time as she got off the bus. Their eyes met. They smiled at each other. And that was that.