No Man is an Island

'No man is an island, entire of itself; every man is a piece of the continent, a part of the main... And therefore never send to know for whom the bell tolls; it tolls for thee'.

The words of John Donne... "What could he have been thinking, comparing complex living humans to inanimate land masses?" was my initial thought when I first read his words, way back when I knew even lesser than I do now. But then, great men do not become great without reason, or simply overnight. And so he said what he did, presumably after he became endowed with riches (not with the riches of money, but of life's experiences)? - ?'No man is an island, entire of itself, every man is a piece of the continent.'

My earlier understanding of his statement had been myopic at best, as I have already confessed. Maybe I just plainly refused to believe that there was any need to be 'a piece of the continent', for my own reasons – growing up pains, adolescent angst and all that! People choose different ways to survive. Some lash out and bite (hurt and get hurt – can get very gory – with a lot of cleaning up involved later), some others do away with all the drama and just vanish (the scene stays clean all through, but then the canvas remains empty at the end too!). 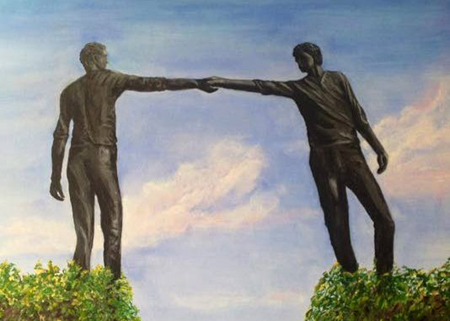 So, back then, I would have much rather crooned to Simon & Garfunkel who sang –

'I have my books and my poetry to protect me.
I am shielded in my armour,
Hiding in my room, safe within my womb
I touch no one and no one touches me-
I am a rock.
I am an island.
And a rock feels no pain
And an island never cries.'

The duo also talked of building walls, a 'fortress deep and mighty that none may penetrate'. It was amazing how totally I identified with them! Ah, somebody understood my pathos at last! It was as if I had found an anthem.... I did not stop to think about the man singing that song, that he was stuck alone inside that room, on that winter's day in deep dark December forever. Forever! I now fail to see the charm in that. It is true that if you stop betting, you never have to lose. But is taking yourself out of the game the answer? It would be the very same as burying yourself alive!

'A ship in harbour is safe. But that is not what ships are made for.'

Some time back, stumbling upon something that Jiddu Krishnamurti had once said struck a chord in me and played music to my insides. "You must understand the whole of life," he says, "not just one little part of it. That is why you must read, that is why you must look at the skies, that is why you must sing and dance, and write poems and suffer and understand, for all that is life." I sat in silence pondering over the passage, savouring the words, reflecting upon my own experiences, letting the meaning sink in.

There are highs and lows, spells of smooth sailing and rough patches mired with doubts and misunderstandings in every and all sorts of human relationships. But to quote more from the Greats, "Of what importance is that to which we cling, if doubt can destroy it? A man who is afraid of doubt will never find the truth. Doubt is a precious ointment - it heals though it burns greatly. If we are afraid of little burns, we will never destroy the impurities we have accumulated throughout our lives. In avoiding life, in fearing life, we shelter ourselves in decaying things and in that shelter, there is sorrow. But in inviting doubt, you will create that which will be eternal and bear the stamp of happiness."

Every now and then, we do need something that makes us aware that there's life beating inside us and that there's only one way to live it - and that is, fully! And the only way to live life fully is to embrace the nakedness of vulnerability and yet find the strength to remain genuine, hopeful and pure. So, like the popular automobile advert says, 'Reclaim your life' and dive headfirst towards a healing catharsis!

The economic recessions that go through the world like waves could just be the best thing that could have happened to some people. Such situations have the curious capacity to serve as eye openers – for they give us an opportunity to set our priorities straight and realize that the only kind of investment that guarantees you results is the human kind. No wonder then, that the world which has been raving about the IQ (Intelligence Quotient) for the past century and then the EQ (Emotional Quotient) for the past few decades has now found a new pet- the RQ (Relationship Quotient)- a high RQ being a must-have in these times of job cuts, terror and personal crisis. Most times, all it takes is sincerity, spontaneity and candor- and the passion in us to sustain it all. Like Mother Theresa said, "Kind words can be short and easy to speak, but their echoes are truly endless!" Terror and the rest come into the picture only when one is a stranger to one's own self and there is a fear of dwelling deeper and deeper within, and because we don't believe in ourselves, we destroy other humans and this marvelous earth!

Everything begins and ends with you - it's really true!

The current times are for rallying around, Sadhguru – style, and waking up to our responsibilities. A few months ago, my parents visited me in Chennai in the peak of summer. There was some tension then about the sharing of the waters of river Cauvery and kannadigas, drought hit themselves, weren't the most popular there at the moment. We had planned to visit the neighbourhood mall and were travelling in a taxi. As we were chatting amongst ourselves, our driver chipped in, "Kannada vaa?" and we said, maybe a bit awkwardly, "Yes". "Kannadigas worrrssshhhhtttt people pa, avunga thanni kuda kuduka maata", he continued as we sat there, cringing. "From where in Karnataka?" he asked, after a few moments passed in silence. "From Mangaluru," we replied and his response was totally unexpected, "Oh Mangaluru, I was working there in the late 80s, making chakkulis in Lady Hill, you may know the place?" And just like that, the ice had thawed.

The great MLK always believed that unarmed truth and unconditional love would have the final word in reality. We need to remember at every step, not to lose the woods for the trees. Even Albert Einstein, the ultimate in human intelligence- the man who knew almost everything, felt the truth in John Donne's words. "Strange is our situation here upon earth" he once said, "Each of us comes for a short visit, not knowing why, yet sometimes seeming to divine a purpose. From the standpoint of daily life, however, there is one thing we do know: that man is here for the sake of other men." I guess that also explains the non-stop uphill boom in communication technology too?

A man travels the world over in search of what he needs, and returns home to find it. George Moore summed up every man's life story in that sentence. But even though we may know our destination, it still remains for us to tread that path, and in how we chart our journey lies our uniqueness.

Dr Ananya Tupaki Sreepurna
Dr Ananya Tupaki Sreepurna is a clinical microbiologist. She spends most of her time researching medically important fungi and occasionally updates her medium page: The Raspy Brain Productions. She can be reached at ts.ananya87@gmail.com
To submit your article / poem / short story to Daijiworld, please email it to news@daijiworld.com mentioning 'Article/poem submission for daijiworld' in the subject line. Please note the following:

Title: No Man is an Island