Bengaluru to Visakhapatnam: An Odyssey on NH16

After weeks of meticulous planning it was time to hit the accelerator. The destination this time was Visakhapatnam – The Jewel of the East Coast. We had a long list of locations on the anvil to cover before we reached the Eastern Naval command. The distance between Bengaluru and Visakhapatnam is just over 1000 km which called for an odyssey on NH16, the main highway which connects Chennai with Kolkata, enroute we had planned stopovers at Ongole, Rajahmundry when we drove up and Yanam, Nellore and Tirupati when we drove down.

I revved up the engine early in the morning and headed eastwards from Bengaluru, by noon we had the revered Tirumala hills to our left. We continued our drive towards Penchalakona Narasimha temple which is situated right adjacent to the Tirumala hills. We then took NH16 and drove towards the city of Ongole for the night stopover. Ongole is a quaint city with a temple dedicated to Lord Chennakeshawa, the next day we visited the temple and started off towards Vijayawada. Mangalagiri on the southern fringes of Vijayawada is famous for its cotton sarees, temple of Lord Lakshmi Narasimha and the Undavalli caves. Driving on the Prakasam Barrage which is over the river Krishna was unique as we stopped to visit the Kanaka Durga temple. It was late in the afternoon and after lunch we started off towards Rajahmundry on the banks of yet another mighty river, the Godavari. 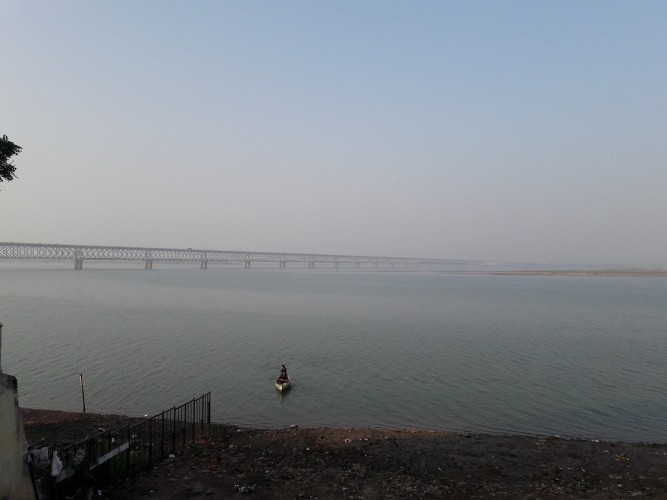 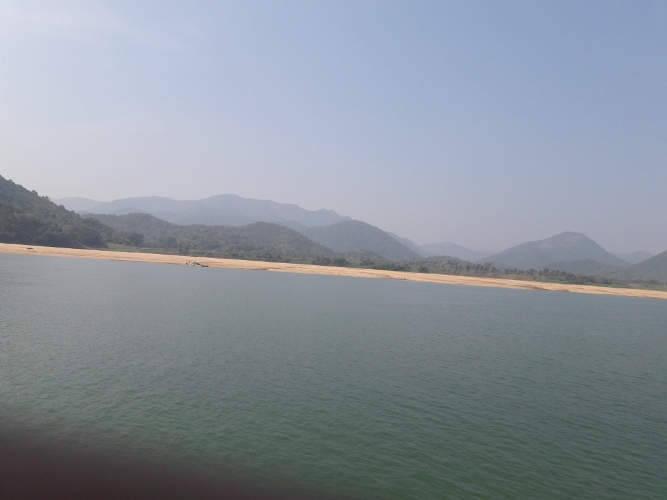 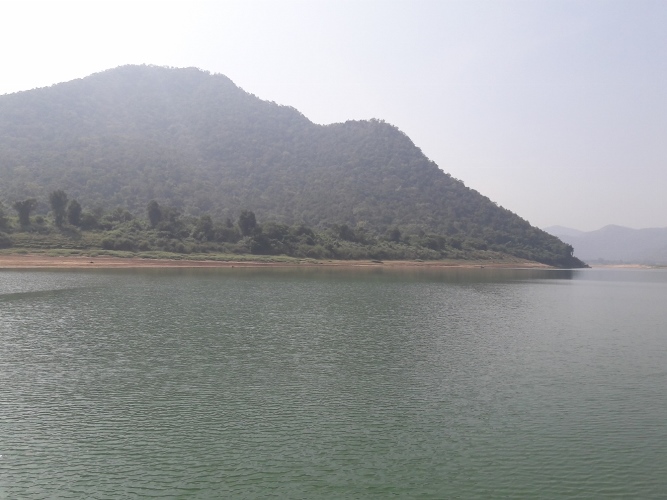 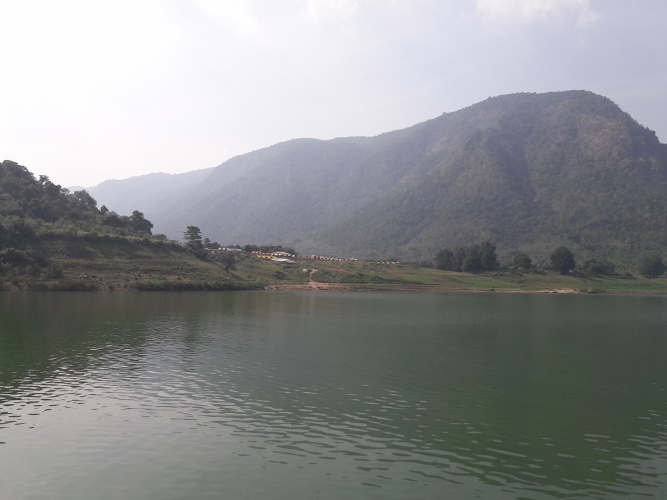 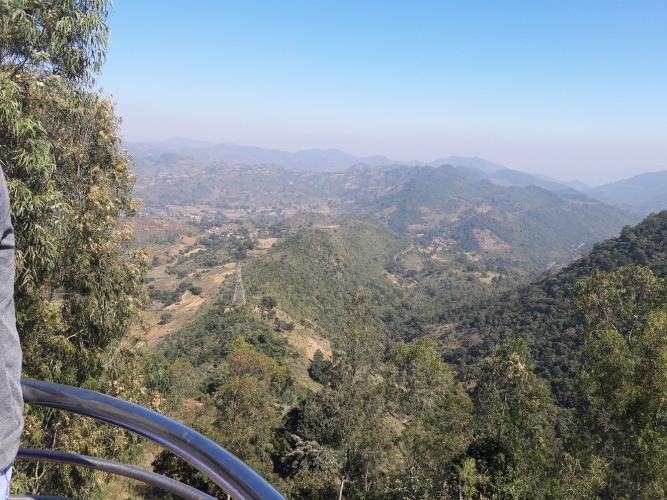 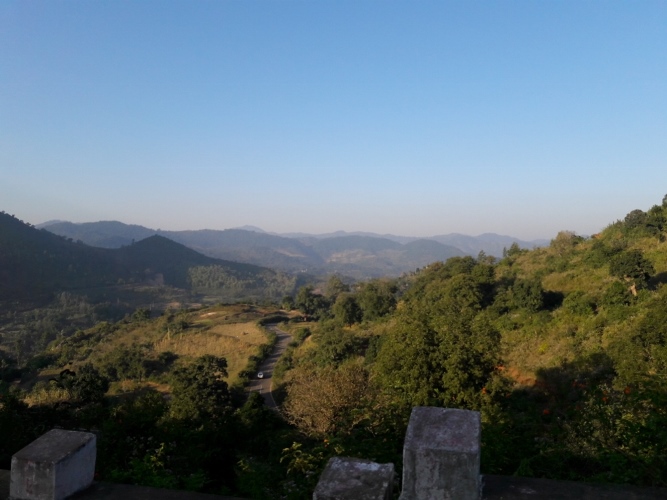 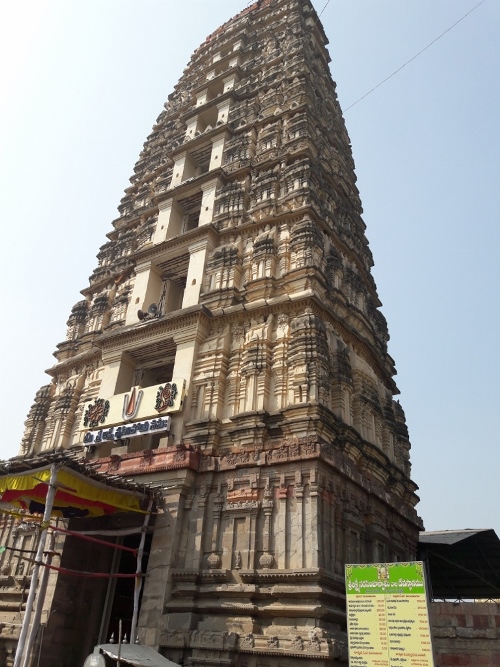 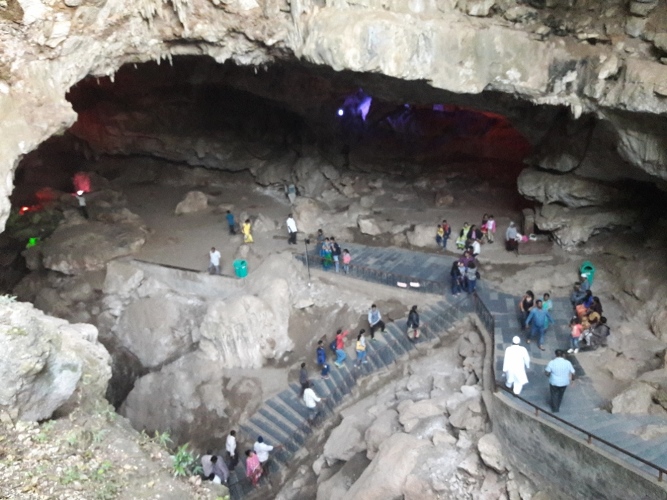 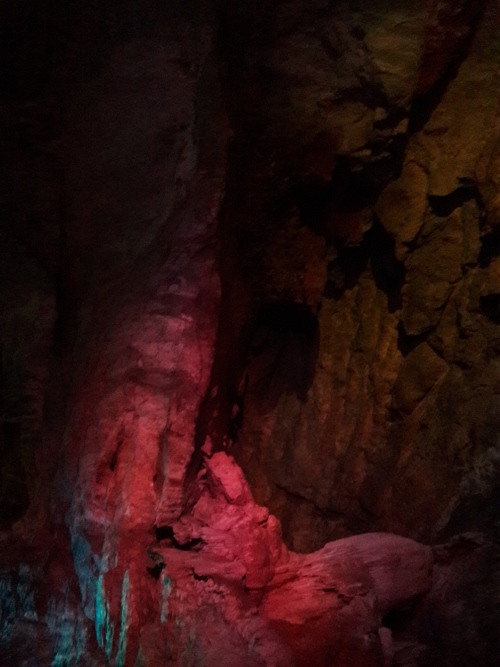 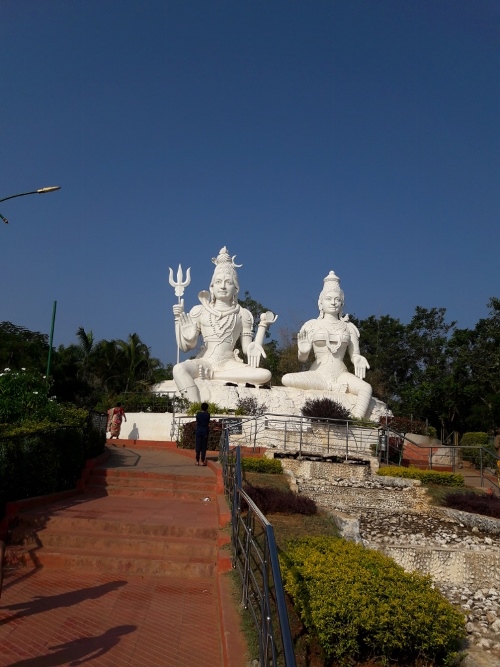 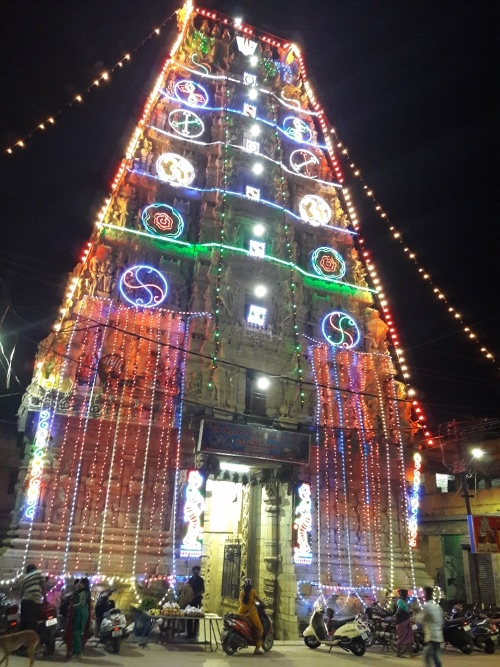 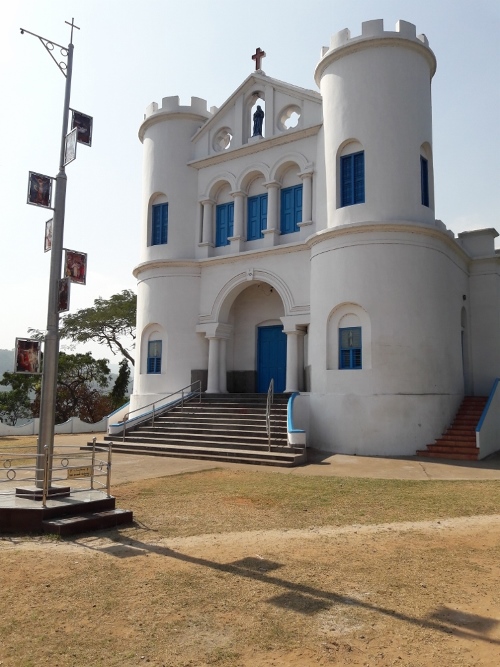 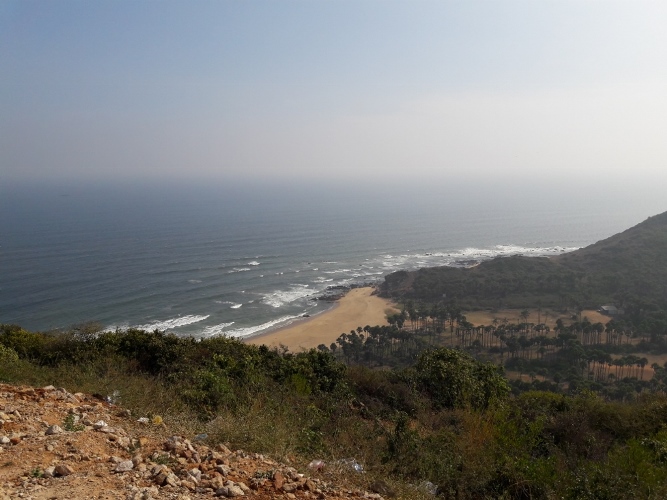 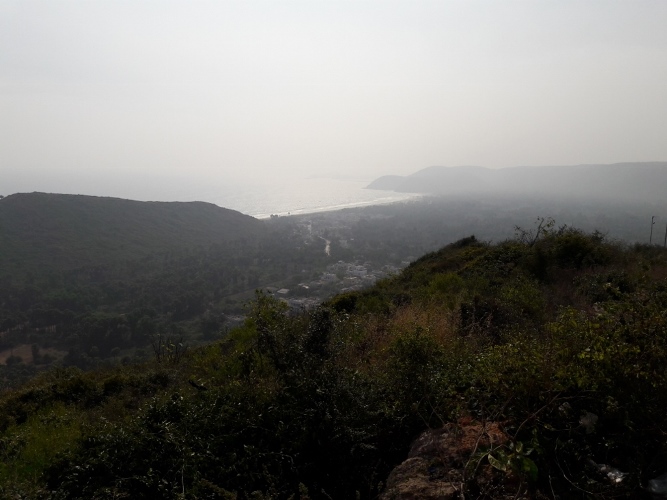 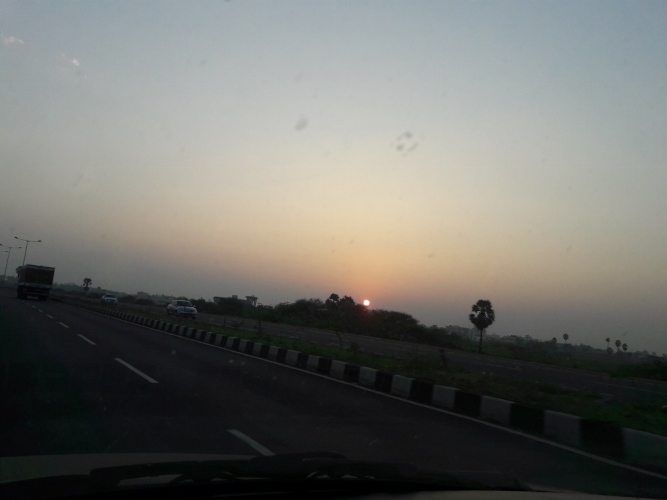 There are multiple bridges on the river Godavari, but I was keen on driving over the 2-tier bridge which hosts the railway tracks on the lower deck and the metal road on the upper deck. It was past sunset as we crossed over the bridge which was illuminated with muti-colored lights on each of its beams. The lights on the bridge would turn red, green, blue, yellow with the cool waters of the Godavari flowing underneath, this was a soothing spectacle to watch. We then booked our tickets to Papikondolu and were excited about our river cruise the next day.

Papikondolu day packages offer ferry cruise on the river Godavari. The ride starts off from the Pollavaram Project and continues upstream till Papikondolu. It’s a day package which offers breakfast, lunch and snacks onboard the cruise. Along the cruise one can view some of nature’s best views of the hills along the meandering course of the river Godavari. The onboard entertainment crew make the trip even more joyful with their music numbers and dance sequences. In case one chooses to stay overnight, then there are separate packages which provide cottages under the stars and without any internet connectivity. We however had to return back to Rajahmundry the same day with loads of memories and images of this paradise – Papikondolu.

Off from Rajahmundry we were again on NH16 headed straight towards Visakhapatnam. Driving up the hill we first reached Simhachalam. After paying obeisance to the lord we stopped over for lunch and headed towards INS Kursura which is India’s only submarine museum. It was a good insight into the lives of our naval heroes who spend days together underwater safe guarding our nation. The next day we headed towards Araku valley. A day trip to Araku would mean a drive up the hills with lush green vegetation all along. Bamboo chicken and Araku coffee are not to be missed here. We visited the Thatiguda water falls, the tribal museum, the Padmapuram gardens and saved the best one for last, the Borra caves. The Borra caves are some of the largest caves in Asia. The entrance to the caves is a huge opening, a flight of steps leads one to the floor of the caves. A 360 degree view of the caves which are formed by natural phenomena leaves you dumbstruck. The Stalactites formed inside the caves have evolved over thousands of years and are truly awesome. The caves are illuminated as sunlight fails to reach the inner depths. We covered all the sections of the caves and by late evening returned back to Visakhapatnam.

The next day we visited Rushikonda beach and went up the hill to Kailash Giri. After a nice stroll in the park we wanted to take the cable car ride but decided against and went down to Ramakrishna beach. Before leaving Visakhapatnam we went up to Ross Church on Ross Hill and enjoyed the panoramic views of the city and the port. It was a sight to behold.

Driving out from Visakhapatnam we headed towards the tiny hamlet of Yanam which is a territory of Pondicherry. I wanted to have a distinction of visiting all the 4 territories of Pondicherry by car and hence I chose Yanam. The river Godavari flows into the Bay of Bengal after caressing Yanam. We visited the temples of Annavaram and Pithapuram, drove past Kakinada and reached Yanam late in the evening. Fuel was cheaper in Yanam which was an invitation to fill the tank up. After a night stopover we visited Draksharamam temple and headed along the Godavari until Alamuru and then joined in NH16 and drove towards Nellore. It was a long drive and by late evening we had set foot in Nellore. Sri Ranganathaswamy temple was decked up and we were invited with open arms to visit the lord.

A little after dawn the next day we visited the Mypadu beach. I enjoyed the swim here and was ready to visit one of the most worshiped lords – Lord Balaji at Tirupati. It was a short drive from Nellore and by noon we were at Tirupati. Joined in my members of our extended family we received the Lord’s blessings pretty late in the evening. After a night’s rest on the lord’s lap we were ready for the drive back to Bengaluru.

These are just a few words which I’ve used to pen down those magnificent eight days when we drove to unchartered territories. Those moments have left a print in our memories and shall remain there forever. More often than not one should take up such journeys to rejuvenate the mind and the body. We all need to take that vital break from the hustle and bustle of our city environment and be one with Mother Nature to find that inner solace.

Title: Bengaluru to Visakhapatnam: An Odyssey on NH16