International Ozone Day: Caring for All Life Under the Sun

Ozone is a naturally occurring gas that serves as a shield from the harmful ultraviolet B (UVB) radiation emitted by the sun. Just as humans need sunblock, the Earth needs protection too. Hence, the earth’s sunscreen is called ozone layer. Most atmospheric ozone is concentrated in a layer in the stratosphere, about 15–30 kilometres above the Earth's surface. Today, there is widespread concern that the ozone layer is deteriorating due to the release of chemicals containing chlorine and bromine such as chlorofluorocarbons (CFCs) and other ozone-depleting substances (ODS). These were used widely as refrigerants, insulating foams, spray aerosols and solvents. Such deterioration allows large amounts of ultraviolet B rays to reach the Earth's surface which on overexposure can lead to skin cancer, cataracts and weakened immune systems. Increased UV can also lead to reduced crop yield, disruptions in the marine food chain and have other harmful effects to the ecology of this earth.

Although CFCs and other ODS are heavier than air, they are eventually carried into the stratosphere in a process that can take as long as 2 to 5 years. When CFCs reach the stratosphere, the ultraviolet radiation from the sun causes them to break apart and release chlorine atoms. One chlorine atom can break apart more than 100,000 ozone molecules. Other chemicals that damage the ozone layer include methyl bromide (used as a pesticide) and halons (used in fire extinguishers) which when are broken apart release bromine atoms that are 40 times more destructive to ozone molecules than chlorine atoms. 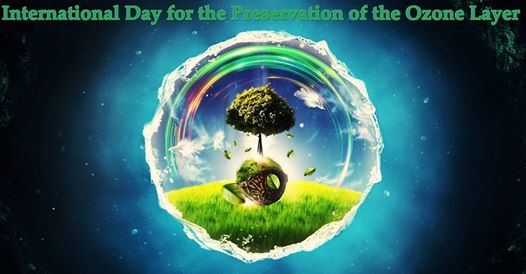 To combat the effects, an international treaty known as the Montreal Protocol was agreed on September 16, 1987, and entered into force on January 1, 1989. Presently, 197 countries have committed themselves to reduction in the use of CFCs and other ODS to protect the ozone layer. Best efforts were made to phase out the production of numerous substances and to substitute chemicals and technologies for all uses that are responsible for ozone depletion.

The theme for the 2017 International Day for the Preservation of the Ozone Layer to be marked on September 16 is: 'Caring for all life under the sun'. This year, to mark the 30th anniversary of the Montreal Protocol celebration, the Ozone Secretariat in cooperation with the Government of Canada will host the Ozone Awards to be held in Montreal, Canada. This would recognize the achievements of individuals, groups and organizations that have demonstrated extraordinary commitment and contribution in the past 10 years.

Our individual efforts also will go a long way in saving the earth’s blanket and keep our planet earth liveable for us and our future generations. We can help in the following ways:

• Buy air-conditioning and refrigeration equipment that do not use HCFCs (Hydro fluorocarbons) as refrigerant.

• Do not buy aerosol products with CFCs. Although CFCs have been banned or reduced in many applications, the only way to be sure is to check the label on all your hairsprays, deodorants and household chemicals. Choose pump spray products over pressurized cans, to further reduce your chance of buying CFCs.

• Conduct regular inspection and maintenance of air-conditioning and refrigeration appliances to prevent and minimize refrigerant leakage.

• When motor vehicle air-conditioners need servicing, make sure that the refrigerants are properly recovered and recycled instead of being vented to the atmosphere.

• The most important thing that we can do is spreading awareness.

If we ALL play our part, our positive actions can definitely solve environmental problems.

By Sharon D'Souza
Sharon is from Mangaluru and is presently working as an Environment Consultant at Green Advisory, Bendoorwell, Mangaluru. She has completed her MTech in Environmental Engineering from MIT, Manipal and worked as a Senior Environmental Engineer at Vedanta Limited- Sesa Goa Iron Ore for 4 years. She is passionate about creating awareness on environmental issues and how each one of us could help reduce environmental impact at an individual level. She can be contacted at greenadvisory@3ekoolstof.com.
To submit your article / poem / short story to Daijiworld, please email it to news@daijiworld.com mentioning 'Article/poem submission for daijiworld' in the subject line. Please note the following:

Title: International Ozone Day: Caring for All Life Under the Sun