Lucy Set to Chat her Way into her Second Century

For age is opportunity no less
Than youth itself, though in another dress,
And as the evening twilight fades away
The sky is filled with stars, invisible by day.

Lucy Pinto, with an airy bedroom, with window open to the green lawn and bushy trees, gazes at the stars and the moon as they unfold themselves after sunset in her airy and commodious house, Lawrence Villa, at Mudarangadi, close to St Francis Xavier Church, Kehna, under Udupi diocese. She is now set to cross into her second century on September 4, 2017 – with her close family, neibhours and friends preparing for the great landmark day for her. But, first we should take a passing look at her pedigree and growth through a century.

Born on September 4, 1917, Lucy is the eldest of seven children of Peter (Pedru) and Angelene of Shirva parish. Educational facilities being scarce and affordability to educate limited (children were needed for home and farm work), she didn’t step into any school. Lucy was married off at the age of 14 to Thomas Mendonca who later worked on ocean-going ships, starting at the age of 20, and died of heart attack in 1966 at the age of 59. By that time the couple had eight surviving children (surviving is the key word because in the rural setting many children died young) – five boys and three girls. Two of the latter, Brigette, died following penicillin injection adverse reaction and the second, Angelene, died of snake-bite. The third and youngest of the children, Jacintha, now sporting the congregational name of Sr. Flavia, 59 years, joined the Holy Cross Order and had been Superior of the convent at Neermarga. 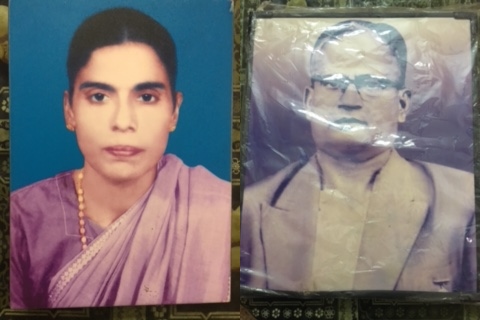 The eldest, Fr Lawrence, 79 years, is working for Varanasi diocese and had been Vicar General and Principal of the diocesan college. Of the rest, Jeafry has retired from State Bank, Dominic is working in Muscat, Edward, earlier working in the Gulf, is now retired and Baptist is settled in Bombay. Today, centenarian Lucy has 16 grand-children and 16 great-grand-children.

Coming back to the centenarian Lucy, who is well-known for chatting about her life, the best repository of her recalled memories is Nancy, the dedicated middle-aged care-taker/companion of Lucy for the last nine years in Lawrence Villa where Lucy preferred to live independently for the last fifteen years. Though she was partially paralysed 20 years ago, through physiotherapy in Bombay, she has recovered enough to move around the house and look after her toilet needs unaided.

Asked about her bride-viewing experience, Lucy said that she had no inkling of the visiting party led by the elder brother of the prospective groom. In fact, when the party arrived with the proposal, Lucy was busy thrashing paddy in the courtyard of her house. Her bridegroom was given a dowry of Rs 100 and she was decked with heavy-duty gold which since has been recast into lighter jewellery with a gold chain still worn daily by Lucy along with her rosary. Talking of religious devotion, one of her constant prayers is for priests and nuns to be true to their vows and vocation.

Lucy, working on a plot of six acres has literally sweated it out to bring up her eight children – collecting cashew nuts and cultivating a variety of vegetables and marketing them in Shirva.

Fortunately, her husband, Thomas, who greatly valued education for his children, had squirreled away some savings which were used to educate their children and opened for them doors for religious service and good employment.

Today, Lucy is mentally alert but for age-related reduced hearing and missing some front teeth. Lucy has a sweet tooth with payasam, sweet dishes, mangoes and ice-cram being on her wish-list. If she can be made to hear with high decibels, she has a torrent of replies. For instance, asked about her children, she rattled out all names in the sequence of their birth. As for the future, she surrenders to God’s plans for her and is ready for anything. We can only wish her happy and healthy post-centenary years and conclude with Daniel Webster, US statesman and orator (1782-1858):

“Venerable men! (Here men embrace women, including Lucy – JBM)You have come down to us from a former generation. Heaven has bounteously lengthened out your lives, that you might behold this joyously!”

Title: Lucy Set to Chat her Way into her Second Century