With a Pinch of Salt: When Bastimam Met Benjamin (Franklin)

Recently, when I heard 'Bastimam' is back from his US visit after meeting certain American stalwarts who spearheaded the freedom movement in their country, I decided to meet him. After all, we are celebrating our 71st Independence Day.

My meeting holds significance for it was one of their former Presidents who described 'freedom' as 'sweet' after destroying both Iraq and Kuwait and killing Saddam Hussain under the suspicion that the latter amassed weapons of mass destruction.

I wanted to know if the present President Donald Trump is any different. After all the news emanating from the US suggest that the incumbent President jumps on whoever tries to talks ill about him, whether a cabinet ally, an official or his own party man.

But first about, Bastimam himself. Basti Vaman Shenoy who is in his prime age of 84 is well known as 'Konkani Sardar' and is also one of the flag bearers of Konkani language who has led many campaigns for the liberation of his mother tongue. During his heydays as a bank official, he has done wonders in the lives of socially underprivileged people wherever he was posted. After retiring from the banking profession, he has offered his heart, mind and his whole life to the cause of Konkani. 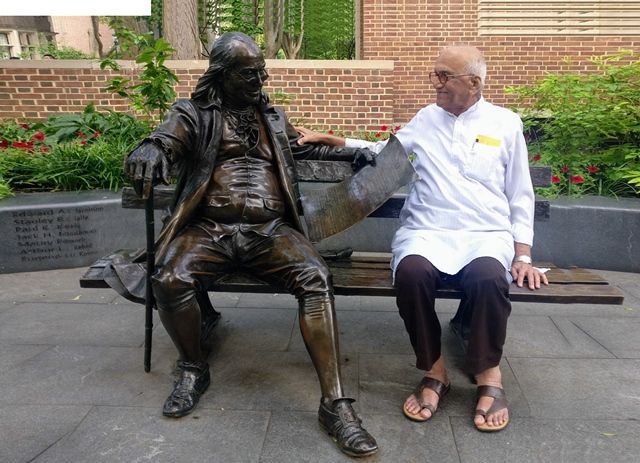 When I met him at the Vishwa Konkani Kendra in Shaktinagar, Bastimam was humming a popular Konkani song, 'Konkani amchi Mai bhas tiss amchi rajya bhas' by Shenoi Goembab who is considered as the Father of Modern Konkani literature.

When I requested Bastimam to share a few good moments out of his US trip, he willingly explained his visit to a few significance sites such as San Francisco Baldwin Museum, Sanford and California Universities, Nevada and Boston Universities, Wharton Business School, MIT in New York, Metropolitan Museum and so on.

But I sense that of all the other things, Bastimam was Maha impressed with his meeting with Benjamin Franklin, one of the Founding Fathers of the United States. Franklin earned the title of 'The First American' for his early and indefatigable campaigning for colonial unity.

I started by asking Bastimam how important is Franklin for the ordinary Americans now, does he earn the same reverence as Mahatma Gandhi in India as the Father of the Nation?

Bastimam was not impressed. He looked straight in my face and said – "You are not out of your old habit of pushing others unto the dump and playing safe."

But he owed an answer to my question.

"Hemacharya," he said. "In a way I realised that both Mahatma Gandhi in India and Benjamin Franklin in the US are treated likewise. While their photos adorn the government offices, their ideals are long forgotten. Forget about ideals, even their idols have no place under big buildings; they are left in the open, in the parks, where I had to meet him. Every other person whom I met in the US speaks about Trump, his wife Melania, his daughter Ivanka and son-in-law, Jared Kushner, the names that have a Russian ascent.

Bastimam further said - "I am sorry for Bejamin Franklin who sits on a bench in a park, braving the heat, dust, cold and at times the sand storm, exactly how Gandhi's statues are abused in the open. Even the crows question his existence and deface him. How sad.'

"We saw you admiring some document in the hands of Benjamin Frankin," I asked him. "Could you brief us about its significance?"

"That is the most important document in Benjamin Franklin's life," said Bastimam. "The document that he still holds in hand is the proclamation of founding of the USA, which is well acclaimed," (see picture)

"Bastimam," I said. "Did you find any affection left in the hearts of American Konkanis for their mother language?"

"Very much," he said. "Every single person whom I met is in awe of their mother language and they are equally proud of our activities here in India."

"One last question, Bastimam," I said. "What is that one single factor that they feel differentiates us from other people speaking their mother language?"

"It is the manner in which we greet each other in Konkani – Dev Boro Dis Dinv, Dev Bovri Raat Dinv, Dev Bovrem Karun. I feel the presence of God is felt in every word that we speak in our language. Many American Konkanis feel that no one else on earth calls god so often to mediate as much as we Konkanis do."

"Dev Bovrem Korun, Bastimam," I said and took his blessing and permission to leave.

When I opened my eyes, it was well past midnight, my wife shook me up and said, "Get up, go to the toilet and come back soon. Ever since Donald Trump came to power, you are calling his wife Melania at least twenty times in your dream. Shame on you, you're doing this sleeping next to your wife."

I wish she knew it was not Melania but Bastimam, I met. I wish it was not a dream.

By Hemacharya
Hemacharya is the Editor-in-chief of Daijiworld Weekly, the only English weekly magazine published from Karnataka.
To submit your article / poem / short story to Daijiworld, please email it to news@daijiworld.com mentioning 'Article/poem submission for daijiworld' in the subject line. Please note the following:

Title: With a Pinch of Salt: When Bastimam Met Benjamin (Franklin)