It was an old dream, since childhood, to conquer snow mountains. It was not easy for me then, but as years passed, by the grace of God, I could manage myself to be a good trekker. After trekking through Chandrakhani and Valley of Flowers (which were part of the Himalayas, but not much snow to be seen), time had come to be a part of a trek on snowy mountains in the upper Himalayas.

Youth Hostels Association of India (YHAI) is a like minded people's association who are into outdoor activity like trekking (it also has economical hostels across the world) and other similar activities. Seniors in our unit always used to say that it is a trek that one must do for the real feel of Himalayas. So finally, we decided to do Sar Pass Trek, which has inclination of 13800 ft. Usually, Yhai conducts national level treks in the Himalayas with easy to moderate difficulty, for which booking opens at least 3-4 months before the actual trek. For famous treks like Sar Pass, seats would be full much faster. 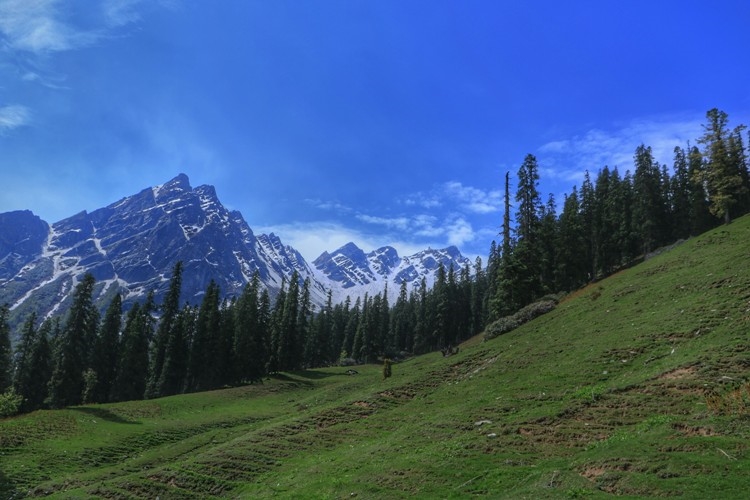 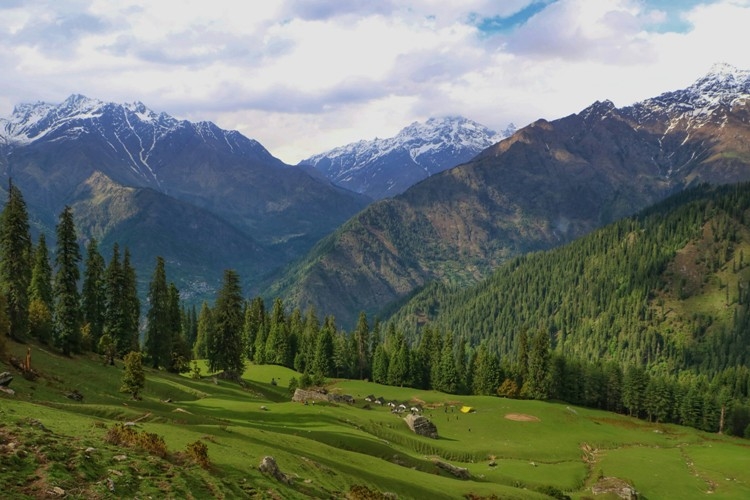 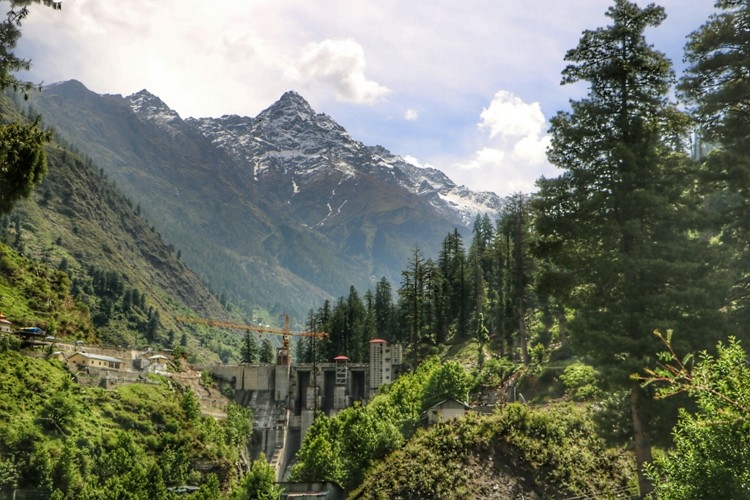 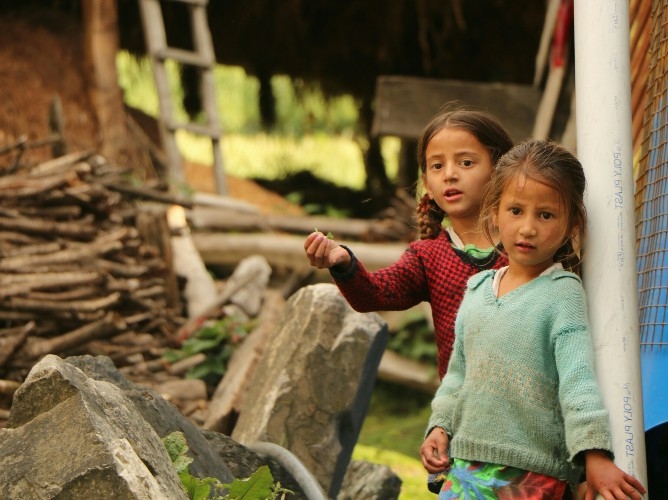 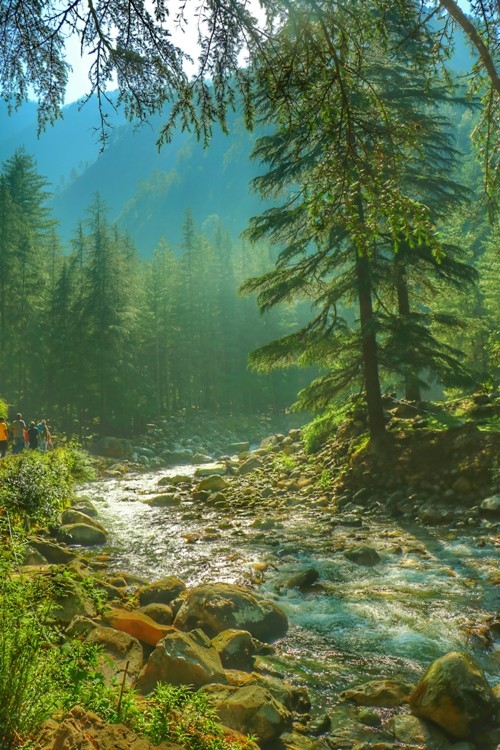 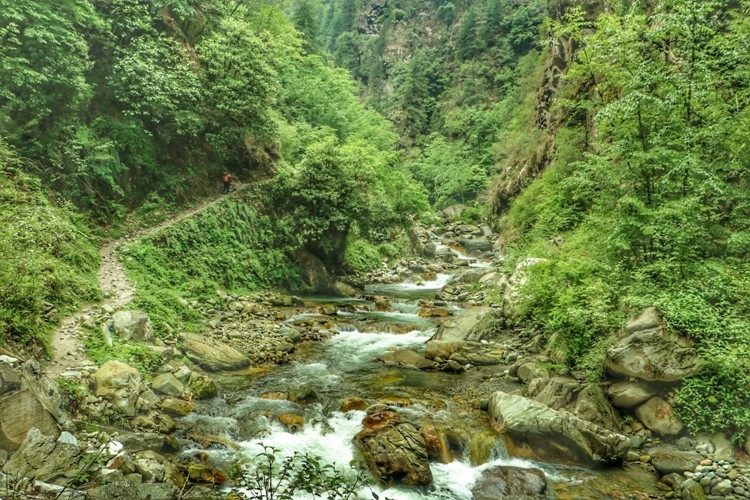 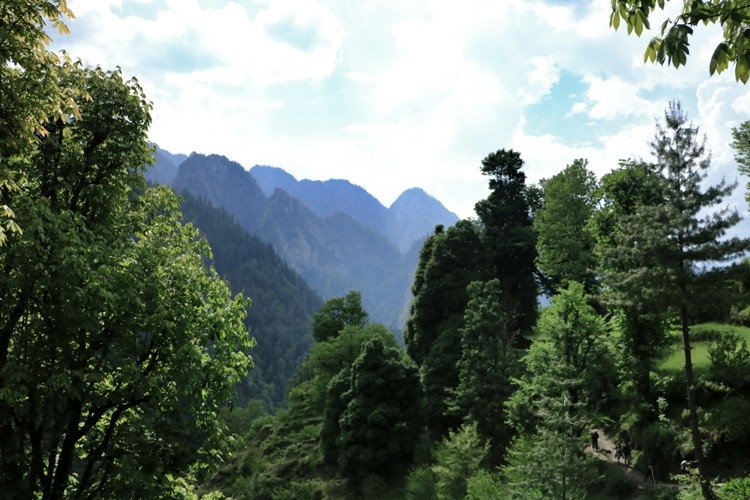 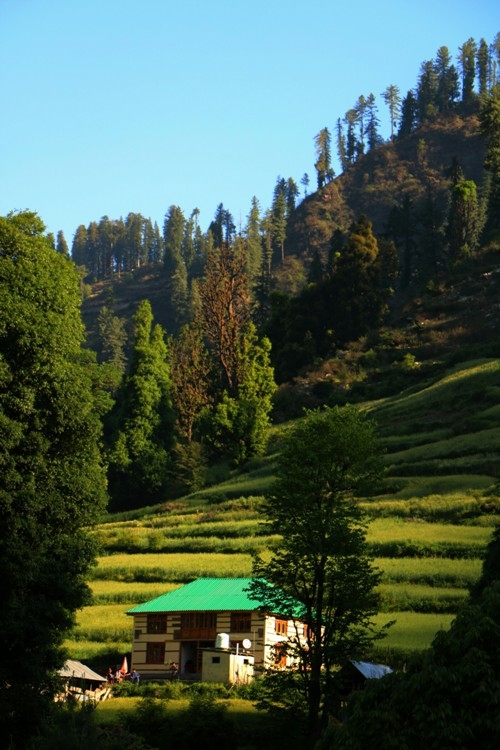 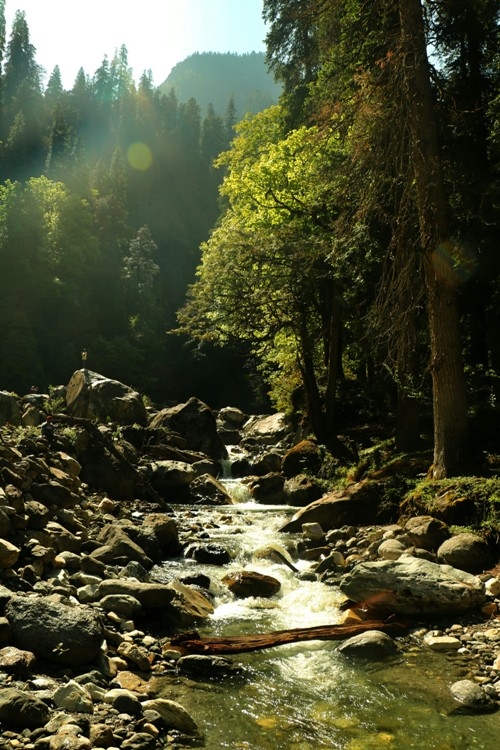 On our date of reporting, we met at our base camp in Kasol, as per schedule after completing due registration process and were allotted with tents. Kasol is 35 kms away from Bhuntar which is just 5 km away from Kullu. With temperature at around 15-16 degrees, it was like a heaven for us, who travelled from Mangaluru's hot weather.

First two days we had acclimatization walk and rock climbing and rappelling session. Wandering around Kasol village was a awesome feel. Tall pine trees, western design hotels, tasty momos and rain every now and then, all gave an ecstatic feeling. We had moderate walk on acclimation day, fun filled camp fire session in which the senior batches performed some cultural events and challenging rock climbing session. The fourth day is actually the first day of the actual trek. The previous day, we had to deposit our excess luggage. The luggage which we had to carry for higher camps, were weighed by the camp leaders, to make sure that trekkers were not carrying excess luggage.

The first day began with a walk of about 11 km to reach first and last village in the trekking stretch after Kasol, the Grahan village which was above 1200 ft. Walking by the side of Parvathi river, through the woods, was serene. Post lunch, we had an uphill walk of about 3kms before we reached the the village Grahan. Kids of the village were waiting for the trekkers to arrive, as it was customary for trekkers to give toffees to the kids. We had to cross the village to reach our campsite.

After the usual briefing session and welcome drink and tea, we roamed in the village. With a population around 400, the village had electricity facility (since weeks, it was down) and school. Many homestays and hotels were present. People were friendly. We chit chatted with some of them, visited one wooden craved temple situated in the middle of the village and played with the kids. All the houses in the vicinity are two storeyed, topped by slate shingles. Greenery around, mountains and sound of river Partvathi river from the valley was mesmerising. Later, we had soup and dinner and rested for the day.

On our second day, we had to reach Padri camp site which was about 9000 ft above. It was a moderate trek of about 8km. It was an easy day for us as we could reach the campsite by 2.30 pm. Rain gods were waiting for us to get inside our tents. For about one hour, we had good rain. Our fun activities, photography session and all started once the rain stopped. We had first look of snow patches at distant peaks. With nice trace of civilization. The campsite was our private play ground as well. Many bulls and cows were gazing around, birds were chipping here and there. The atmosphere was so cool and calm that we were all at peace.

We started the third day of trek earlier than usual. We had the tough challenge of steep trek of about 8-9 kms. We had to descend about 800-900 ft to cross a beautiful stream, before we started climbing again towards our next camp Ming Thacth. We had to take more number of breaks and intake of ORS mixed water was more often. After walking about 7 hours in the woods, we crossed a large open area. Soon, we had to climb a 70 degree steep path too. By then, a slight drizzle added to our fury of strain.

By 3.30 pm, many of us reached the campsite and settled in tents. In no time, rain started pouring heavily followed by a hailstorm. It was a first hailstorm experience for many of us. As usual, the rain stopped within two hours. The campsite was slippery after the rain, and some members fell down many times. But our spirits were high. Our next day's destination, Nagaru camp was visible at the end of the mountain line. In the evening, we sent torchlight signals to Nagaru camp and replies were received very soon (just for fun)! 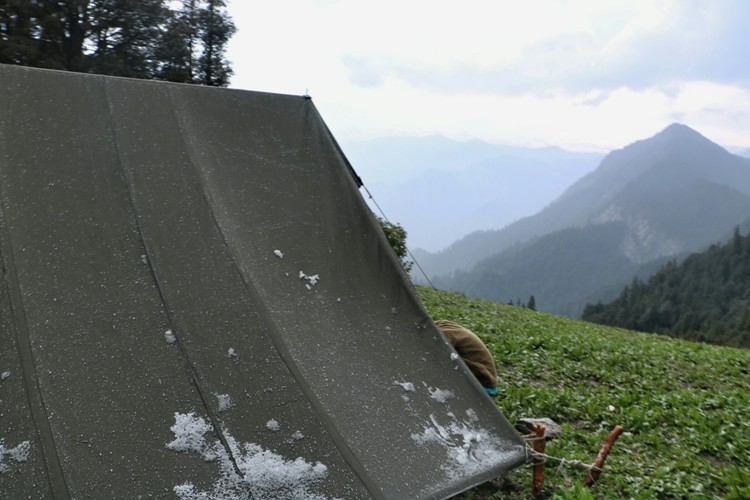 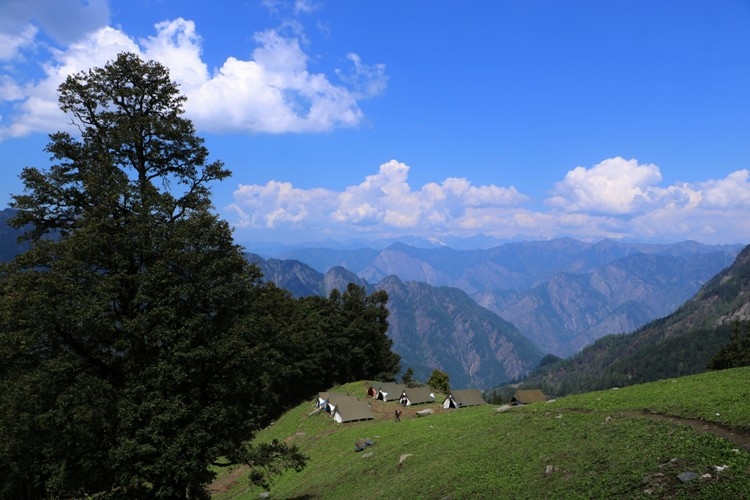 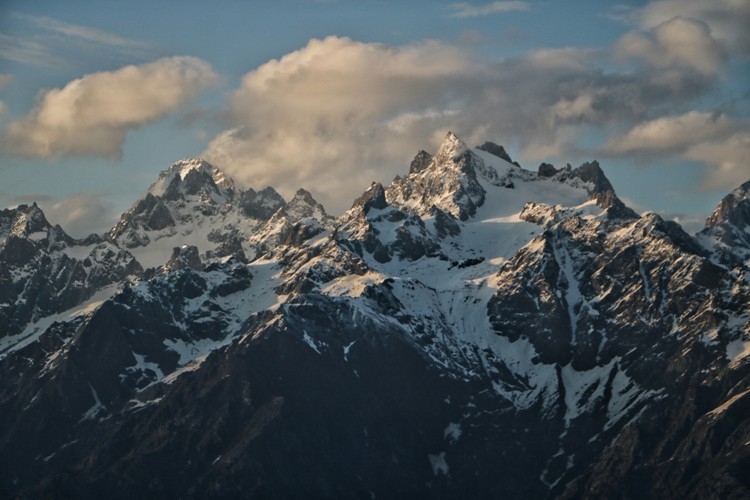 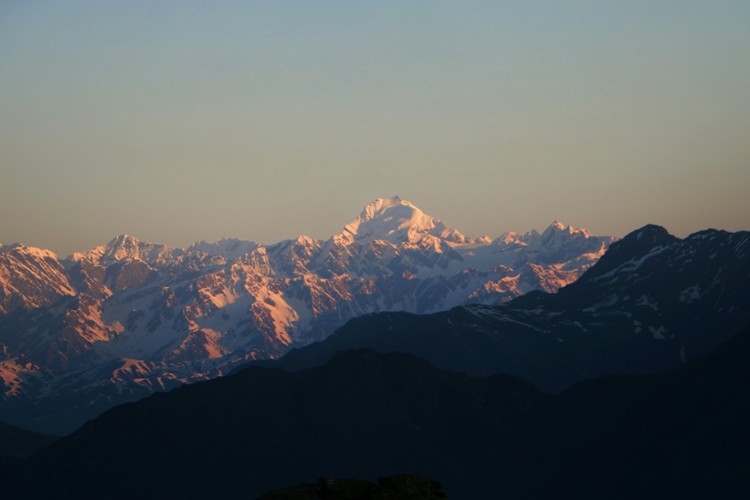 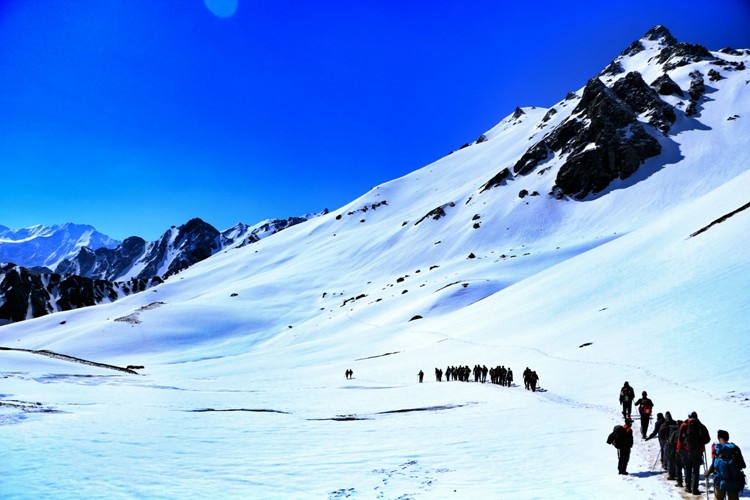 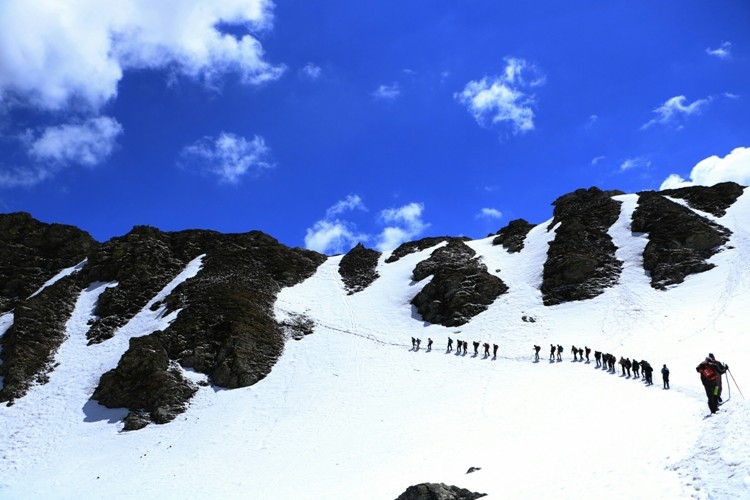 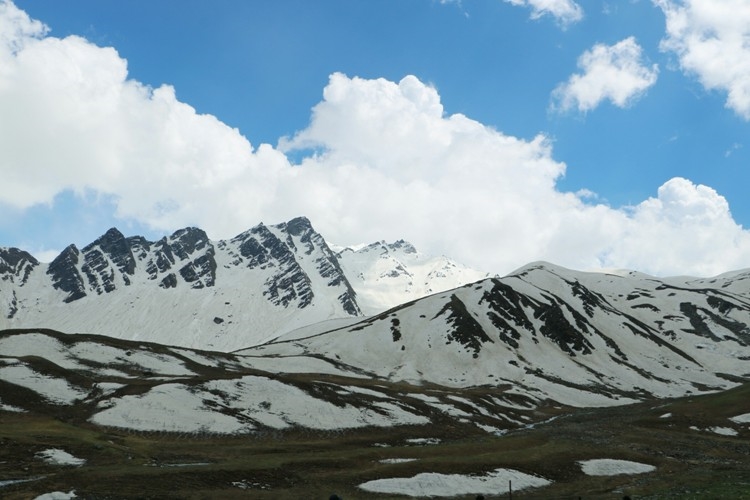 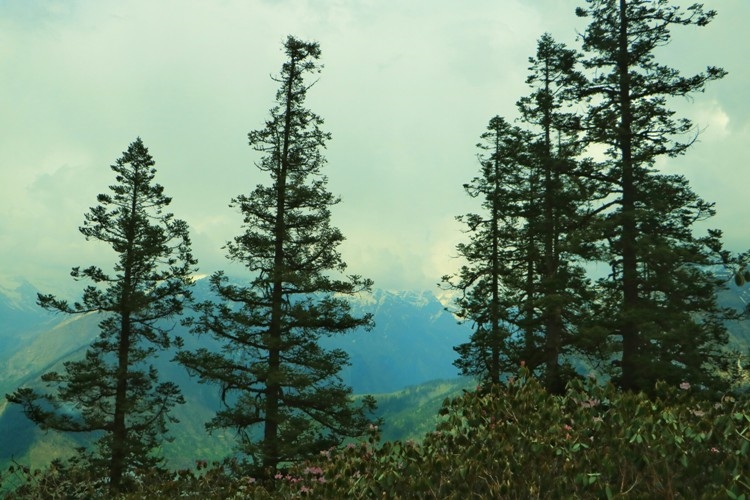 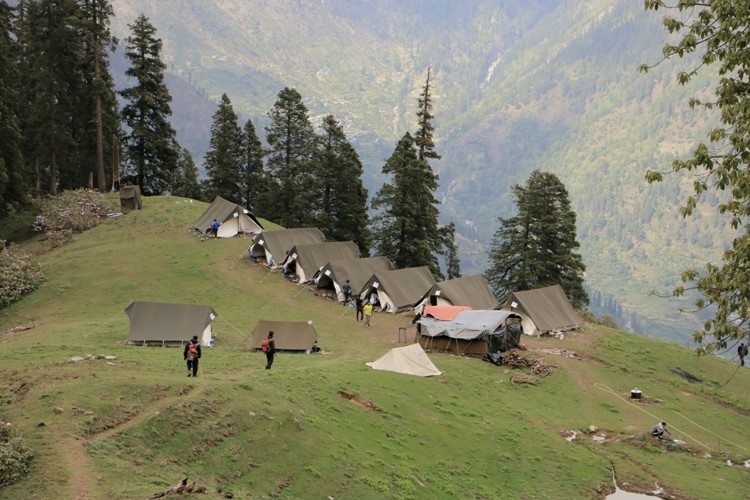 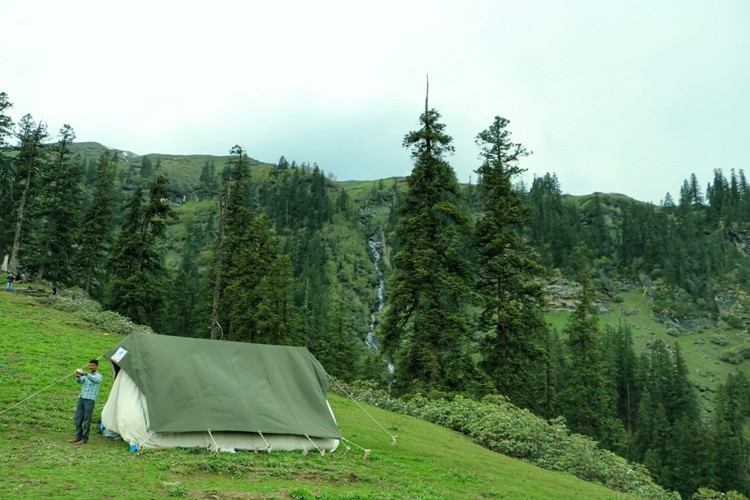 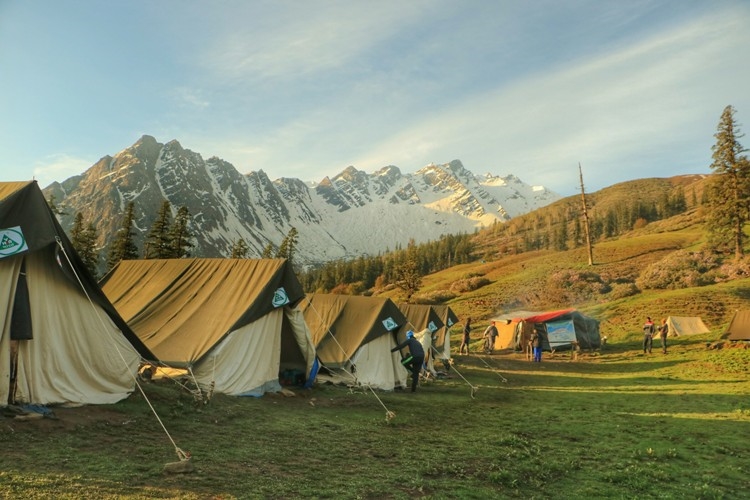 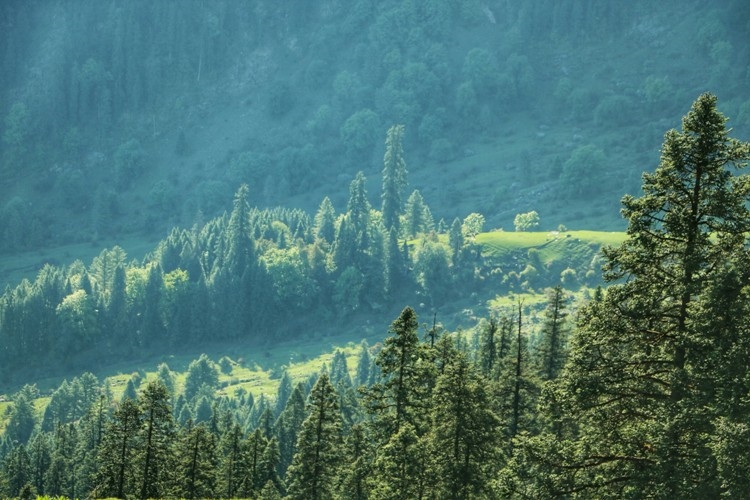 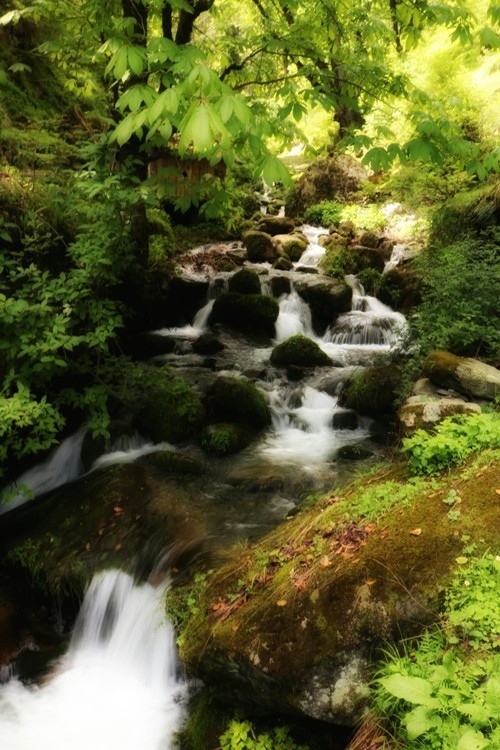 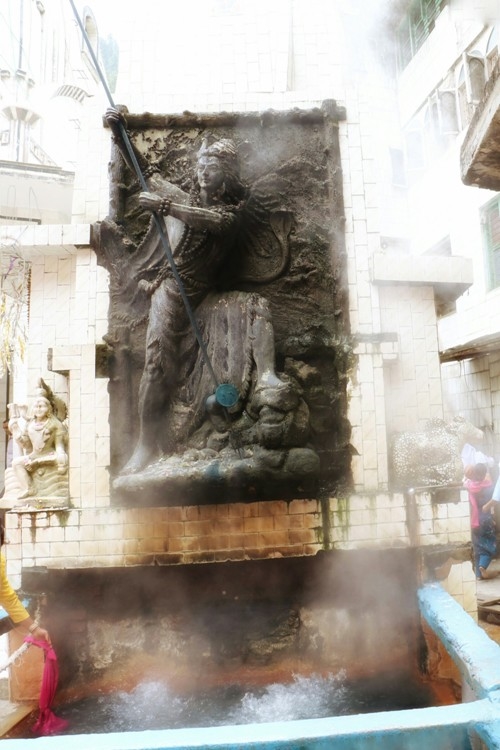 Our trek began a little late on the fourth day, as the distance to be covered was very less, may be about 5-6 km. In 5 kms, we gained about 1300 ft of elevation. Everybody had to walk in a single line. The area was known for loose stones and any wrong step might prove fatal, due to slipperiness and steepness. By 2.30 pm, we reached Nagaru camp at a height of 12,500 ft. The campsite is situated at the edge of mountains surrounded by valleys and snow peaks. By no time, rain started pouring and we settled in the camp. The rain became too heavy and we could see the snowfall and hailstorm. The wind was also very heavy.

For about two hours, we sat inside tent, holding the tent and the tent poles, helping volunteers to clean the snow from the top of the tent. Though we were enjoying, the cold and noise of hailstorm was unbearable. Somehow, we managed to get tea and soup in the midst of such heavy snowfall. By 5.30-6.00 pm, the Gods of Himalaya, decided to give it a break. Our camp leader asked us come out. We were unsure of the situation outside. In no time, the sky became clear, and the sun started smiling with his warm rays. Our cameras started clicking pictures. By the side of the site, we had snow which was used for cooking and drinking purpose. The cooking staff, collected the snow and boiled it for cooking. Water was not available anywhere around the camp site. Next day was our summit day. We had to start trekking by 4.30 am. So we were served dinner by 6.30pm itself, and in no time we were in deep slumber.

We were up by 3 am on the fifth day for the trek.

Stars and snowy mountains were so beautiful to watch. It was the scenery of a life time. We had some breakfast and by 4.45 am we started our trek. We had three guides to assist us. It was a very slow walk, as we had to walk on snow most of the time. Fresh snow was okay to walk on, but hard snow was very slippery. We helped each other, our trekking sticks were very useful, and our guides helped us many times.

After walking about three and half hours, we reached the summit. When we reached the Sar Pass, the sun was already shining. The full snow covered area was shining with the reflection of sunlight. It was a majestic view with full of white snow. All around, 360 degrees , it was just snow, mountains and sky. I was actually awestruck with the beauty. We all enjoyed, played with snow, took number of photos and selfies. Then our guide asked us to continue our journey. Meanwhile, we saw a lake called Sar (Sar in local language means lake), a frozen lake, due to which the trek is called as Sar Pass. Pass are the high elevated mountains which are used as trek routes to reach the nearby places by locals.

We continued our walk on snow for about two hours to reach the top of Beskeri. In Himalayan trek, we get a chance to slide down from the top on snow. An ice slide is a fabulous part of the trek. We just have to sit in snow where the steep track takes us down by gravity. We have to use your elbows and legs to some extent to control your speed. In normal course, the speed will be about 20 to 25 km. The snow slides would be about 800 mtrs to 1.5 km long. The slide was awesome. We slid about 800-900 mtrs and everybody enjoyed it. We then started walking towards the camp at Beskeri. By 4 pm, we were happily eating pakodas at the camp enjoying the beautiful sights of mountains, greenery, falls and snow covered peaks and meadows.

We had two more days to go before reaching civilization. After Beskeri, we had Bandhak Thatch campsite. It is known as Switzerland of Sar Pass. Thatch are meadows or open grasslands used by locals for gazing of animals. We took so many snaps, played cricket and other games and enjoyed the moment to the core.

We started early on the sixth day and reached the nearby civilization, Barshini village. We took a vehicle to Manikaran. Manikaran is known for hot water spring. The bath in natural hot water spring was mind blowing. All our tiredness washed away and we felt rejuvenated. The hot water spring boiling at around 80-85 degrees is used to boil rice and other things to serve the visitors. Water was directed to a large pool where cold water was mixed so that people can take bath. By 6 pm, we reached our base camp Kasol with lot of memories. We left Kasol the next day for river rafting and spent time in Kullu Manali before we travelled to Delhi for our onward journey to our sweet home Mangaluru.

Every moment was just like a dream, but it will last for ever and ever.

For YHAI activities in Managluru , those who are interested can contact:  prashanthmb89@gmail.com
By Pachu Mangaluru
To submit your article / poem / short story to Daijiworld, please email it to news@daijiworld.com mentioning 'Article/poem submission for daijiworld' in the subject line. Please note the following: