Equality: Not Equal to Justice

For every woman rushing to a packed bus but managing a seat reserved for ladies, is a man who scoffs and raises the question that ponders in the minds of most other males - they talk about reservations, they talk about equality; what are they upto? And the answer is simple - Equality doesn't always mean justice.

Now when we use the term 'women empowerment', what does it actually mean? Giving more power to women or equal power to women? This question is the boiling point of every feminist vs non feminist conversation. 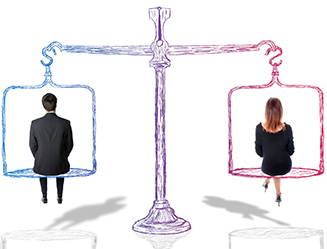 Let me break it down to you. A guy has 3 mangoes, another has none. You give each of them 2 mangoes. According to you, distributing the mangoes equally is equality, but are they equal? They first guy now has 5 mangoes whereas the second guy has only two. Here, justice comes into play. Justice is when you distribute the mangoes in a way that both have equal number which brings about equality. And that is why equality is simply not enough to empower women and justice needs to act, wherein, more power needs to be given to them.

Who are the privileges and laws and reservations actually for? The women? It works the other way around too. It is for men or women, for that matter, who gatecrash on women's right, keeping a yardstick for every encroachment to the right she enjoys by virtue of being a human being. These rights and laws act as a watchdog for every man that plans on denying a women her basic right to equality. A woman has all the rights to develop, grow and prosper the way she wants to. These laws only make sure she's not to be meddled with, so that no man can ever act as an hinderance on her way to prosperity, her way to success.

Such laws would no longer be needed if people started acknowledging each other as a human being, irrespective of what gender they belong to. The ultimate goal is to have a society where the individual is respected, and not the gender.

By Chaithali Rai
To submit your article / poem / short story to Daijiworld, please email it to news@daijiworld.com mentioning 'Article/poem submission for daijiworld' in the subject line. Please note the following:

Title: Equality: Not Equal to Justice