I was in the 6th standard of a government school and in the middle of teaching the students self-defence in times of unpleasant situations in and around home, especially as most of them had parents who worked as garment factory workers, housemaids and autorickshaw drivers, and therefore would be absent from home most of the time leaving the children alone. I took in some students to act as perpetrators to make it easy for me to demonstrate and for them to remember.

We were enacting a situation where a stranger had to touch me on my body and I had to quickly grab him by his arm and topple him to the ground. The boy did his act very well but before going back to his seat, came to me and said sorry. I asked for what and he said for touching me the way he did, although it was as per my instructions. That stands out in my memory, for the simple reason that the boy, all of 11 years of age, remembered his manners even though he didn’t have his parents around him all the time to remind him of them.

The behavior of the boy in the above incident seems obvious, but sadly it is not these days. The incident below illustrates what I am saying. 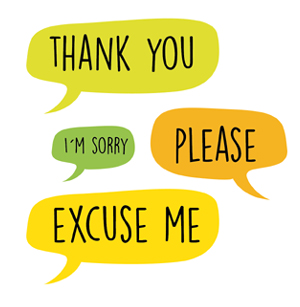 On a Monday morning, I sent a common message, over the messenger, to six of my colleagues – May the day go well with you, may something good come your way, have a good day. In response, two reverted as to why I had sent that. One enquired whether I was hinting at something pleasant that was going to happen in the latter part of the day. Another came to my seat and asked what the occasion was, whether I had mistaken it for his birthday and I leisurely clarified that I just did something beyond the usual – greeting and wishing another human being well. The rest two didn’t respond at all - not to this day. None of the six thanked me. Last Christmas, a group of us played the Secret Santa game where we needed to gift each other anonymously. Sensing that people did not take time to trace their giver, I disclosed the names a week later. To this day, not more than a handful from two dozen participants, thanked their giver for the gifts.

All of a sudden, it seems like insensitivity, indifference and self-centeredness have become the new normal. Not only do people put up with them, they are even justified as off-shoots of modern life.

Take the instance of this new recruit in the workplace. She was struggling to enter the corridor where her workstation is located but could not. She looked around and found me with the swiping card hanging by my neck. She asked me, ‘can you open the door with the card’ and I did as if in a stance, because I realized she, although from an elite management institute, didn’t even bother to say please – nor thanks after the door was swiped open. Wasn’t that impolite? Someone said, ‘she must have been in a hurry to complete some work.’

Many times, young executives get on to the city bus with a laptop hanging from the shoulder and a mobile phone in hand. They are so engrossed in talking on the phone that they are oblivious to those nearby - so much so that they stamp one person with their high heels and hit another with the huge and heavy laptop bag and don’t even turn around to say sorry. Again, we brush aside such incidents saying, ‘their high-tech jobs must be very stressful.’

It’s not that we take lightly our manners with outsiders or strangers or in unfamiliar surroundings thinking it won’t benefit us in any way. Many do this even within their own family and neighbourhood.
My neighbour visited her friend and the son opened the door. Without even inviting her in, the boy walked away to his room to catch up with some pending chores. My neighbour, who shared a good rapport with her friend, pointed it out to her but the mother remarked ‘teenagers are teenagers’ rather than acknowledge that the youngster needed to be corrected, leave alone call him and correct him right then.

People pursued success even in olden days but alongside believed in living responsibly. Now though, with our false perception of success, certain qualities like courtesy, humility, understanding and compassion have almost vanished like the proverbial horns from the head of an ass. And, that is very disturbing for a society that needs manners, to live amicably.

Being a person with a positive outlook, I am always on the lookout for the silver lining on the cloud and I do find it. I have found people mindful of manners, in unexpected circumstances like the boy who apologized to me in the school. I will always remember the BMTC conductor who thanked a passenger for the change which the latter gave him. And the regular customer who told the sweet vendor that the sweets were tasting really good and fresh on this particular day, accompanying it with a broad grin that said it all. Not to miss the guest at a wedding that I attended, who aimed the paper cup at the waste bin and then when it missed the bin, picked it up himself and threw it in the bin not waiting for the maid to do it.

I wish I could witness more incidents like the ones mentioned immediately above. All I can say is, thanks for people like them and let their tribe increase.

By Deepa Dumblekar
To submit your article / poem / short story to Daijiworld, please email it to news@daijiworld.com mentioning 'Article/poem submission for daijiworld' in the subject line. Please note the following: