Brand Selflessness: Following in the Footsteps of Mother

'Saint of the Gutters', 'Mother of the Destitute,' 'Maa' are not mere titles that speak of the life- witness of Mother Teresa. They point to the fact that she was considered a living saint already by the people she encountered when she was alive. The Catholic Church is now formally canonizing her as a – St Teresa of Calcutta. Is this historical moment just an opportunity to look at her life and ponder over it or merely read as a piece of literature about her? Isn't it an opportunity to look around and recognize the many more Mother Teresas of today and try to be part of their butterfly effect in our own little way to transfer and contribute positive vibrations to society? Isn't this a worthy homage to our 'Maa' rather than mere organizing programmes to glorify her which incurs huge money? 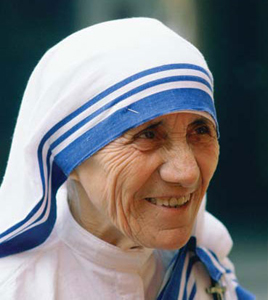 In a word, her elevation must be an opportunity to give hope to the poor and the marginalized so that this world can be a better place to live in if many more cooperate in the mission to transform human attitude. The BRAND of “selflessness” continues even today.

What would Mother have to say to us today? May be she would say that we should not be fooled by the worldly standards of success, prestige, honour and competition. She may stress 'Be successful in the eyes of God, or at least be faithful.' True. The modern generation measures greatness and success by the number of likes, views and hits, the usual phenomenon in the social networking psyche. But Mother Teresa's brand stands out amidst this craze for success with St Teresa's motto of life – “We are not called to be successful but faithful.” Being selfless in being true to self is what made her popular among the least and the last of society. Today there are many more Teresa's who possess a selfless heart that goes out of themselves.' Yes, she has given birth to many more of her kind. She has proved that butterfly effect can transform the world. It had its own legacy. Everyone knew Mother Teresa was a great soul. She has today become a synonym for service even to the modern generation who know not much about her past.

Today many have re-modeled their life based on her principles and her charisma – “selflessness.” But the more we rejoice when we see many more Teresas today the more we must realize that they have a struggle to face in spite of the limelight they never get for their selfless dedication to build a better world.

Have you heard of some great hoteliers in Pune who provide free breakfast to people near Pune railway station? What about Narayanan Krishnan, a chef-turned-social worker who declined an offer of elite job in Switzerland and feeds people daily? He narrates the spark behind his new venture saying, “In 2002, I saw a very old man, literally eating his own human waste out of hunger. I went to the nearby hotel and asked them what was available. They had idli, which I bought and gave to the old man. Believe me, I had never seen a person eating so fast, ever. As he ate the food, his eyes were filled with tears. Those were the tears of happiness.”

Among such less known Mother Teresa's of today, a man from the Southern part of India stands out. I cannot but admire him. Why not call him the Mother Teresa of the South? But the surprise is that he is a man yet a mother to the destitute on the streets of the garden city of India. It is he along with many others who is carrying forward the great yet simple legacy of “selflessness”, a brand less attractive to modern people today. Incidentally he too got his inspiration after having met Mother Teresa and seeing her work and charisma. He is none other than T Raja, alias 'Auto Raja', lovingly called so, by the people of Bengaluru. For the past 14 years he has done things without seeking limelight in and around Hennur in the outskirts of Bangalore. His service was duly recognized for the CNN-IBN Real Hero award 2010. He is rightly called by many as the 'living angel.' He was also once invited to deliver TED talks.

T Raja, the son of a telephone linesman, knew not what parental love was and took to stealing, drinking and gambling too early in his life. He ran away from home and lived on the streets for about two years. He slept by the roadside near garbage bins. Life seemed meaningless to him as he lived liked one of those destitute wandering aimlessly on the streets of Bangalore. 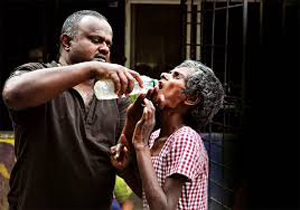 Unable to bear the life of such anguish, Raja decided to start working to support his basic needs. In one of the interviews, he once said, “I drove auto rickshaws for some time and then taxis and was struggling to make ends meet. I also worked as a bodyguard and then as a hit man in the auto union.” During this phase of Raja's life, he felt a constant struggle in his heart to find answers to life's questions. A friend of his helped him realize that there was more to life than just struggle. He realized for the first time in his life that life itself is a blessing to those who use it for the service of others. He once told the Asian Age, “I decided then that I would dedicate my life to helping the dying and destitute people on the streets. My decision was strongly supported by my religious principles and my family.”

In the year 1997 he started an institute called the New Ark Mission of India (NAMI) in a 5” by 6' feet passage outside Raja's tiny single room house. Since then, the New Ark Mission of India has been remarkably dedicated to rescuing and rehabilitating the deserted and the dying people from the streets. The Home of Hope is where the future of the homeless lies. His wife and his three children also share his vision and offer him their full support.

Narrating his life he once said, “Whenever I approach the destitute, pass by and even the people I intend to rescue, they are surprised. Passers–by suspect me of luring these people into hospitals and stealing their organs. On the other hand, the destitute themselves are taken aback at my holding them because they have never been approached by anyone before. In fact, they are only used to people stoning them or abusing them. Some of them are so weak that they can barely move their limbs, while others who just manage to move need to battle with the street dogs to feed themselves from the leftover in trash bins. Most of them, rejected by their families, are living the most inhuman lives, their bodies covered with sores. When I come across such people, I bring them to our Home of Hope.”

Since Mother's demise in 1997, he continues to pick these people up from the streets in his auto and bring them to his home. He bathes them and shaves them and cleans up their wounds. They would then be dressed afresh and fed.

His Motto, Dream and Investments:

The motto of his life, he says, is to bring hope into the lives of people. “It is my dream to make sure that not a single person remains homeless on the streets of Bangalore.” His dream is to open the 'Home of Hope' Centre in each and every state across the country, to transform the nation with greater and stronger values of service towards the underprivileged.

To a question about his investments he says, “When I began my work, my investments were compassion and faith. God has shown me the way forward from that day one.”

In 1998, India Campus Crusade for Christ donated half an acre of land for the work of New Ark Mission of India. In the course of time, the Home of Hope was built in a serene half acre plot at Doddagubbi village near Hennur in the outskirts of Bangalore. Today, this 3,300 sq ft building accommodates more than 170 residents. The task is not easy though, as his home is run entirely on voluntary donations, says Raja.

The home finds it difficult to meet the needs of food, clothing, shelter, education and medication for its residents. Raja has managed to acquire an ambulance to pick up the sick from the streets, but he knows that there is a long way to go.

'The limitations don't distract me from the real focus of the Home of Hope,' he says. His life's focus is to ensure dignity of life and death. He gives special care and attention those who die homeless on the streets are taken to the home, bathed and then cremated. What more can we ask for?

One of the remarkable services offered here is that every effort is made to fulfill the last wish of a dying person. Some residents, in their final moments of life have desired to eat an apple; some have asked for a good meal while others pray and peacefully leave the world. Raja considers it an honour to be able to care for these people even if it was in their final moments of their life. Many residents of the home die in Raja's arms. Such noble service is truly uncommon in today's world.

Today Mother Teresa's elevation must be an opportunity to propagate selflessness in our lives and in the world governed by ego-centric competitive work ethics. Selflessness is a great virtue yet least found, wanted and appreciated by the modern generation. It often goes unrecognized and unrewarded. Many IT companies have made outreach compulsory. But I have my own reservations about it. Is it for the sake of it or is it a genuine move? But I cannot but admire many IT professionals leaving their lucrative jobs to dedicate their lives for the least and the lost.

To start the process of mercy we need to follow the guidelines of Maa, namely we must stop judging (discriminating) people. We must spend time to see goodness. “If you judge people you have no time to love them” said Mother Teresa.

We humans are used to adoring great people like Mahatma Gandhi, Mother Teresa, Bal Gangadar Tilak, Bhagat Singh, but rarely imitate their example. Is it our weakness? May many more Teresa's be born or made. May our nation to which Maa belonged totally show the way to the world. Let us try to be little Mother Teresa's at least in our day-to-day life, in our neighbourhood, on the road, in the bus stand, railway station and so on, offering our little mite to make this world a better place and grow in the vibrations of selflessness.

O selfish soul! Ignore not thou a selfless soul!

By Lancy Fernandes SJ
To submit your article / poem / short story to Daijiworld, please email it to news@daijiworld.com mentioning 'Article/poem submission for daijiworld' in the subject line. Please note the following:

Title: Brand Selflessness: Following in the Footsteps of Mother