With Minor Basilica status, the way ahead for Attur

Holy Father Pope Francis has elevated the St Lawrence Shrine Church at Attur – Karkala to the status of a Minor Basilica through the Congregation for Divine Worship and the Discipline of the Sacrament by its Decree dated April 26, 2016. The Udupi diocese under the leadership of Bishop Gerald Isaac Lobo has decided to celebrate this rarest of the rare honor and title on August 1, 2016 with proclamation of the Decree of the elevation of the Shrine to the status of Basilica and its dedication. It is a proud moment and a matter of joy for all who know Karkala – Attur St Lawrence Shrine.

For me visiting Karkala – Attur church has been great experience every time. During childhood I was waiting for ‘Karkoll festh’ (Festival of Karkala Attur Church). After my marriage with Concepta (since 25 years) the occasions to visit Attur church were increased. Her sister Catherine who is known as Reena, wife of Nakre George Castelino (Recepient of National Best Teacher Award) lives in Nakre with her family. George is very much involved in Attur shrine activities. One can see him during the annual festival days announcing the events. It is our regular practice to visit the Attur Church while visiting George-Reena family at least 3 – 4 times a year.

In 1980s and '90s I was serving as the leader of the youth in the diocese of Mangalore. During that time the youth activities of Karkala deanery were being organized normally at Attur. I had the privilege to attend a few of them. 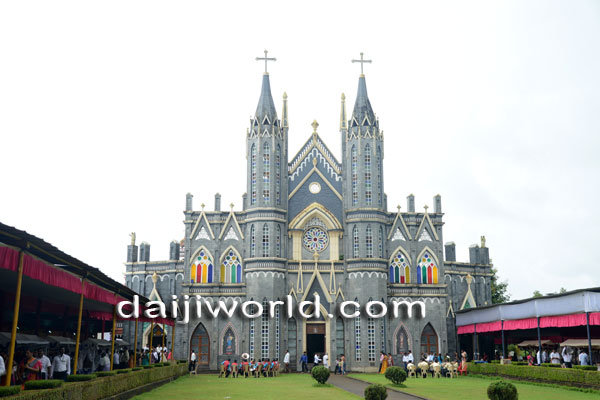 In 2001, the Bi-Centenary celebrations of Attur church were held. In commemoration of that landmark event the present beautiful new church (I presume that the church structure may also be responsible for obtaining the Minor Basilica status) was built under the leadership of the then parish priest Fr Joswey Fernandes and it was inaugurated on 21st January 2001. To mark the occasion I had brought out 8 pages special supplement of the then prevailing ‘Janavahini’ Kannada daily under Maria Advertisers banner. To organize articles etc for this supplement I had to go Attur for about 5 times.

During all these occasions – my thoughts were that people come to Attur and fulfil their spiritual needs even though there were no good roads from near and far places and especially from the bus stops to the church. It was difficult to get autorickshaws / taxis from the main roads. They had to rely on their feet. Around the church nothing was available to quench their hunger and thirst except on the days of Annual festival.

I have visited several pilgrimage centers in various states in India and a few abroad including Lourdes in France. Many a centres have good road / rail connectivity. Also there are facilities like auto / taxies, pay and use toilets, washrooms, rest rooms and lodging etc provided either by the centres or by philanthropists or by enterprising people. Such centres have auto / taxi stands, shops, boarding and lodging facilities etc. But at Attur there are no such facilities (Of course of late roads have been developed, shrine administration has provided a few facilities inside the premises). It is true that Shrines and pilgrimage centres cannot provide all facilities to the devotees and visitors. It is the duty of the local bodies and the government to provide facilities like good roads, transport and shelters etc. Being the then Diocesan Pastoral Council secretary for about 6 years of Mangaluru from 1986 to 1991 I had raised this issue and had discussions about these points with the authorities and wrote in newspapers also. But not many developments took place.
By the grace of God, Udupi has been formed as a diocese in 2012 with the eminent personality Dr Gerald Isaac Lobo as its founder bishop. As the entire Karkala taluk included in Udupi diocese naturally Attur Shrine came in its jurisdiction. With this and through bishop Gerald the way is opened for the progress of Attur Shrine.

Holy Father has approved the prayer of the Udupi bishop for elevating the shrine Church to the minor Basilica status. Thereby, our beloved Attur shrine is being raised to the honor of a Basilica. With this the shrine and the diocesan authorities gear up for providing day to day spiritual needs as well as developmental activities within its reach. Local panchayat, people’s representatives and the government have to put more emphasis in providing more and better facilities to the devotees visiting the Basilica.

With the new status of a Basilica not only devotees but also people with a tourist interest may visit the Shrine from places near and far. To facilitate such flow of people many more facilities need be arranged in and around the shrine. Among them a few are:

1. Autorickshaw / taxi services to and from the nearest bus stations.
2. Shops with necessary items and restaurants near the shrine.
3. Apartment hotels/ mess near the shrine for those who wish to stay overnight.

People who know Attur and who are residing far and near may request tour operators to include the Basilica in their tour itinerary. As more and more people visit the Basilica a small township may come up in the long run Enterprising and common people too can join hands in one or the other way to see this happening.

My wish: Any place can develop by itself and without much human efforts if there is sanctity in such places. Over 200 years the Attur shrine has developed by itself and fulfilled the needs of devotees far and near. Now with attaining to the Basilica status the shrine will develop and shine as a great pilgrimage centre. No doubt it will happen.

Title: With Minor Basilica status, the way ahead for Attur