Touch the Untouchable - An Outsider’s View

Born in the 90's and being a Christian, I never knew that caste system still exists in India and still certain class and community people are considered as backward class and untouchables. I have a close friend of mine who belongs to the Mahar community (now converted to Buddhism), prominently known as the “Untouchables of Maharashtra", who created an interest in me to understand this sensitive issue. He is passionate about the work of Dr B R Ambedkar (Babasaheb) for the untouchables and his contribution towards the whole society. His aim in life is to be instrumental in continuing Babasaheb's work ahead and to abolish the caste system.

Interacting with him, I actually realized how the people are unaware about the root cause of the issue and the history attached to it. I read two books written by Babasaheb namely, "Waiting for a Visa" and "The Untouchables: Who Were They and Why They Became Untouchables". The first book consists of his personal experiences where he was discriminated as an untouchable and the second one consists of his logic, reasoning and thoughts based on the Vedas, Sutras and the history as to how this particular class came into existence. His way of writing is outstanding and makes us ponder as to how things turned out so differently. I have not experienced discrimination myself but I have visualized it in my surroundings. Maybe earlier I have not given so much thought about it until I tried understanding the issue.

We assume that discrimination doesn’t exist in today’s world and the issue is resolved and we actually don’t have to work towards it. But we don’t realize that it still exists, maybe we don’t pay heed when we see discrimination happening thinking it’s not happening to us or maybe we ourselves discriminate without realizing it. Caste system is the basic cause of this discrimination. Till we follow this it will not be possible to free ourselves from the ghost called “Discrimination”. Babasaheb said “Caste is a state of mind. It is a disease of mind. We practice casteism and we observe Untouchability because we are enjoined to do so by the old customs. A bitter thing cannot be made sweet. The taste of anything can be changed. But poison cannot be changed into nectar.” Hence by practicing old customs and sticking to Caste System we cannot curtail discrimination. To forfeit discrimination it is imperative to abolish Caste System. 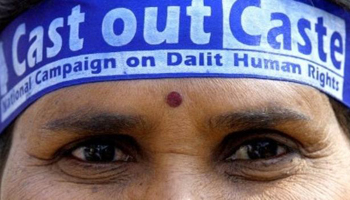 The reason that motivated me to write about untouchability is the way a few of my friends react when they talk about untouchables or when they realize the next person belongs to that community. The people belonging to this community, even though they are educated prefer not to disclose their identity because the other communities still mentally believe in discrimination. Be it during interviews, or a social gathering, or a case of promotion, these people think twice before they reveal their caste, not because they are ashamed about it, but because discrimination still exists in the society. They are worried about that the others would tamper their progress, or they will lose growth opportunities when people would come to know their caste and they wouldn’t get a chance to excel. I wonder that if the educated masses belonging to this community, even though being talented and confident, have these thoughts, then what about the uneducated people?? They must be taking it as a “shame” to belong to this community. Would they ever get a chance to grow in life and be a part of the main stream of the society like everyone else? I am afraid they won’t, if our mentality towards discrimination doesn’t change. Because this community (particularly untouchables, that is, SC & ST Category) is lesser when compared to the huge masses who don’t belong to this community. So it becomes difficult for them to fight for their rights and change the mentality which has been existing from thousands of years. Every time there wouldn’t be a great personality born to make a difference and fight for their rights. It’s time, we belonging to the other communities express our belief in equality and give the backward classes equal opportunities to excel in the society.

Now people would have the question that these people already have reservations everywhere so how we can say that the discrimination still exists? Many people consider this reservation as a discrimination against them or being biased or favoritism towards the backward classes. But before making this statement do we think how it actually feels belonging to the backward class. A class which was treated worse than slaves a few years back and deprived of education for thousands of years, now finally is experiencing some sort of standard in the society. How you think that the entire backward community would get educated and practice equal rights if there were no reservations for them against the other communities at large. Because of these reservations, today, they are getting education and awareness of their existence and rights. These reservations help them to be at par with the others in the society. Another reason for these reservations is that we still believe in discrimination. Imagine if there was no discrimination at all in the society, then there wouldn’t be any reservations required for anyone. Everyone would be equal and would have the same rights.

The fact is that we still practice Caste System and ultimately the discrimination which stimulates a need for reservation so that the backward classes have equal opportunities. The irony is that we ourselves question on reservations, when we ourselves are the reason for this. Then we tend to take this as a basis where we try to create hatred in the general masses saying that the reservations of the backward classes tamper our opportunities and this thought is carried on by everyone without trying to actually understand the basis of it. And then we conclude that these people have more advantage over us in all the sectors and use discrimination in favor of them. My attempt here is to create the basic awareness that caste system still exists in the society where we all live.

It will always haunt the downtrodden, socially and economically backward people with discrimination. It wouldn’t be physical as it was few years back, but mentally the discrimination is at the same level as before. Still when people talk about the backward class they are like “yeah that person, he belongs to this class”. Is it necessary for them to address the person with his class than recognizing him by his name or his work? Even if the person has created his own image and his at par with everyone still they address him saying he belongs to this class or that. Even to this day when people realize that the other person belongs to the backward class their behavior and attitude changes towards that particular person. If we, who call ourselves open minded and educated, still mentally have a second thought against the backward classes, then how we expect them to grow and get equal rights in the society. Even the Bible says that “when god created man, he created in his image and equal”. When all are humans, then how do we discriminate them to be higher and lower? Did this discrimination come into existence just to prove our superiority over the other? Just to prove our beliefs and rituals are superior to the other? Something which we actually need to ponder!!

Let us make a conscious effort to acknowledge that we don’t practice discrimination and that we support these backward classes to grow in life and get equal status like us. Let us make the effort to make a small change by showing the people belonging to this community that we treat them equal and their belonging to a particular caste wouldn’t change our attitude or our behavior towards them. Let us recognize them for who they are and what they do instead of questioning them about their status in the society. This small effort from our side would help this community to grow and be confident that people wouldn’t judge them on the basis of their caste and what matters is their education and talent to prove themselves. And they would be free to express their identity anywhere anytime.

By Shiny D'Souza
Shiny works with the manufacturing company Polycab Wires Private Limited in Mumbai as an Executive Assistant to the VP Exports. She loves to travel and read books.
To submit your article / poem / short story to Daijiworld, please email it to news@daijiworld.com mentioning 'Article/poem submission for daijiworld' in the subject line. Please note the following: