What doesn’t kill you, makes you stronger

Not a single day passes off these days without the news of road accidents claiming lives of the people.

Road accident is a global tragedy with ever-raising trend and they have earned India a dubious distinction. With over 1,30,000 deaths annually, the country has overtaken China and now has the worst road traffic accident rate worldwide.

A car accident is perhaps the last thing that you think could ever happen to you. But regardless of how careful a drive you are in, you do not know just when you might come across a reckless driver and get into an accident yourself.

Well, this is a story of my friend Irel. We have been together through thick and thin as budding dentists for the past two years. This is a tragic incident which changed her life completely.

On 25th of December, she was on her way back from a pre wedding ceremony with her cousins and a few friends in a car, with a family friend driving. When they were almost close by home, they came across another accident that happened at a curve near home and in an attempt to avoid that the driver lost control and the car hit the divider and toppled many times. She fell out of the car. She suffered a head injury, in medical terms put as laceration over left forehead and cerebral edema. In other words, a piece on the left of her scalp from her eyebrow till her ear side was gone off.
She was rushed to the hospital by the police and her family around. Then emergency treatment was given. The doctors did not expect her to survive as her response to the neurological test was just 1 at that moment, which should have been at least 5.

“I was unconscious for almost 36 hours. By the grace of God, I was responding better after a few hours and the doctors gave some hope to my family” she says.

Her parents earn for their daily bread in Kuwait. So once they were informed, her mom immediately took an emergency leave to be with her. 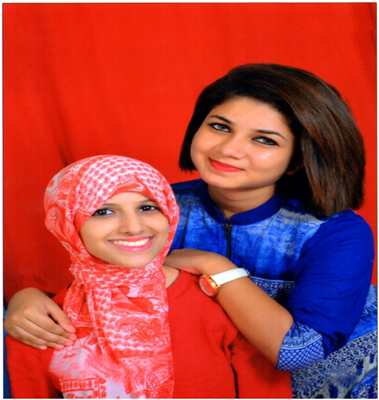 “Once I gained my consciousness, the first thing I realized was I had no hair on my head and it was shaved off. I then realized I was in a hospital and asked the nurse why I was there. She told me about the accident I had met with and about the surgery I had to undergo” she says
The fact that she herself was aware of the possible complications and the life long scars the surgery would leave behind left her traumatized,.
“When my mom arrived, I couldn’t believe I was seeing a day where my parents had to be worried to this extent about me”. Everybody who visited her at the hospital were worried if she could recognize them. Prayers do work, miracles do happen and to everyone’s astonishment her memory was sharp.
Once her condition got better, the surgery procedure and complications were explained to her such as they were not sure how good it might look. It might not be neat, since her injury had no proper anatomy. She had no idea how her injury was. Since it was serious, they had to do it as soon as possible. They took her consent and on 4th January she underwent a transposition flap surgery where a piece of her scalp from behind was shifted to cover the injured area. She was on medications and under post operative observation.

Finally came the day where they had to remove the dressing. “After the doctor left for the first time I saw my mom in tears. She said this is really hard to accept and she refused to show me the mirror. Finally when I saw I couldn’t recognize myself. There were sutures all over my head and I was bald ! For the first time, I could not hold back my tears anymore. It took me a long time to accept it. Thanks to the constant encouragement and support I got from the surgeons and my dearest mother, I actually made through it. She is the strongest woman I have ever known. I can never express in words how much of a support she has been to me in my most painful day till date” she says.

After the discharge she headed back to Kuwait with her mom. There were mixed emotions running through her mind and questions that ran in her head were “Am I alright”, “Am I the same person that I used to be”. Back home her father and her sister became her pillars of strength who molded her into a stronger girl, who she thought she would never be.

After 36 days of medical rest, she got back to college. She wears a scarf on her head to college to cover and to prevent infection.

“I don’t wish for anybody to wake up to a painful day where they cant recognize their identity in the mirror” says Irel.
Never let the stumble in the road be the end of your journey. Life isn’t meant to be easy. Its meant to be lived. Sometimes happy, other times rough.

Today when I see her smile with the scars beneath the scarf I realize that “You never know how strong you are until being strong is the only choice you have”. It just takes a fraction of a second for your life to change forever, so just live every moment to the best and make life worth while and memorable when your alive.

by Nikki Thimmaiah
Based on a true life incident….
To submit your article / poem / short story to Daijiworld, please email it to news@daijiworld.com mentioning 'Article/poem submission for daijiworld' in the subject line. Please note the following:

Title: What doesn’t kill you, makes you stronger