The Endearing Charm of Bhandaje Waterfalls

With temperatures soaring beyond 40 degrees in most cities in the country there is definitely a frantic search to find a perfect summer retreat to beat the heat. This ideal sanctuary can only be in nature’s lap sans the tourists and away from the hubbub of modern civilisation. We, a group of six members of YHAI, Mangalore, found this perfect retreat place in Bhandaje falls in the Charmadi ghat range. Being avid trekkers our enjoyment doubles only when we trek to our destination enjoying nature’s bounty and beauty, the misty hills, the lush green cover that cloak the hills and the evergreen flora and diverse fauna.

It was touted as a moderate trek covering a distance 8+8 kms, which was not a huge task for regular trekkers. Only when we began to walk did we realise that the entire trail (it was at least 12 kms and not 8 kms) was nothing but a steep ascent and in some areas the gradient was almost 70 to 80 degrees if not more. Taking into consideration the tough topography and February month’s poignant incident that had really jolted the YHAI team, only hardcore trekkers were encouraged to be part of this trek. Of course it was for the first time in recent years a small group six YHAI team ventured into the Charmadi range. With sleeping bags, extra pair of clothes, two liters of water and some fruits and eatables we started at around 6.30 am from Mangalore by bus and reached Ujire. 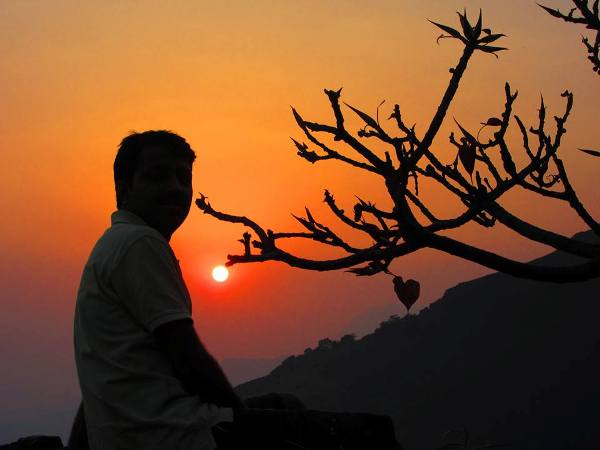 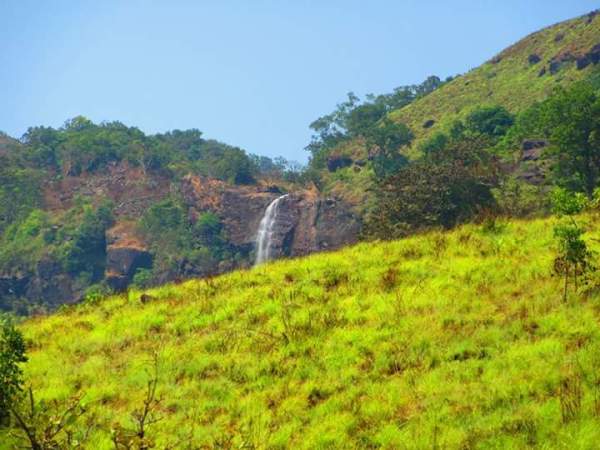 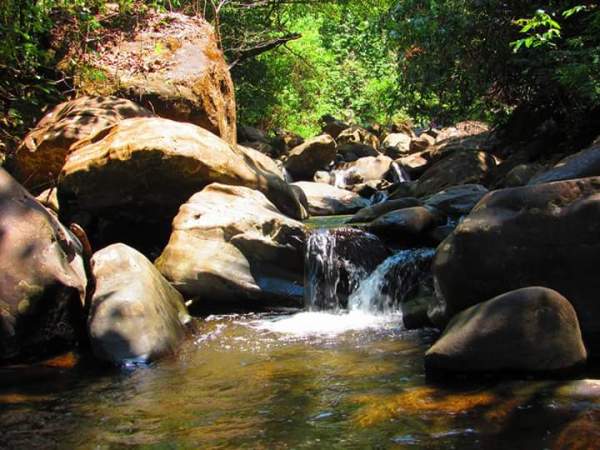 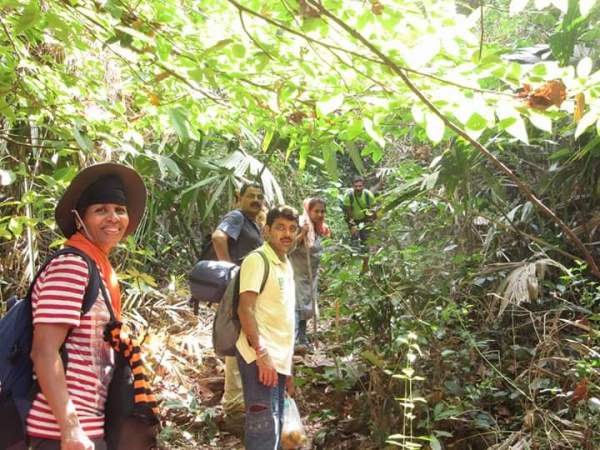 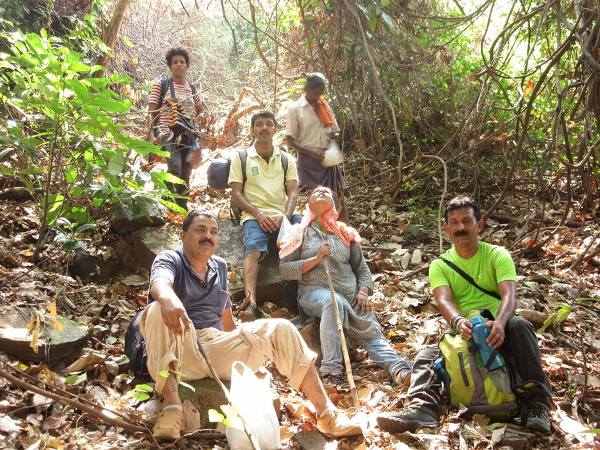 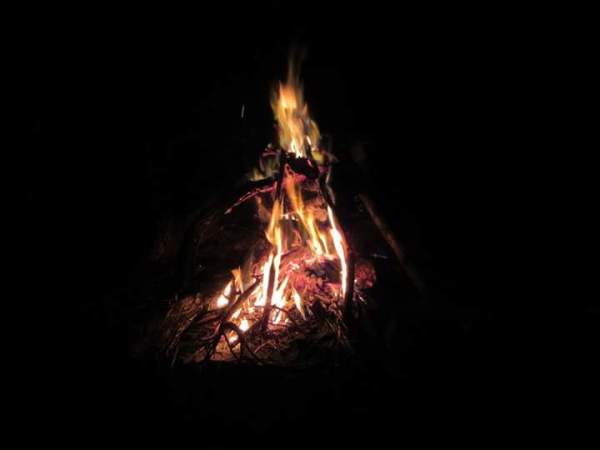 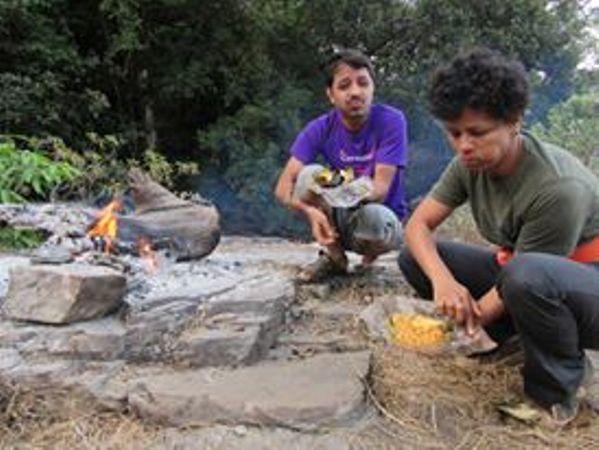 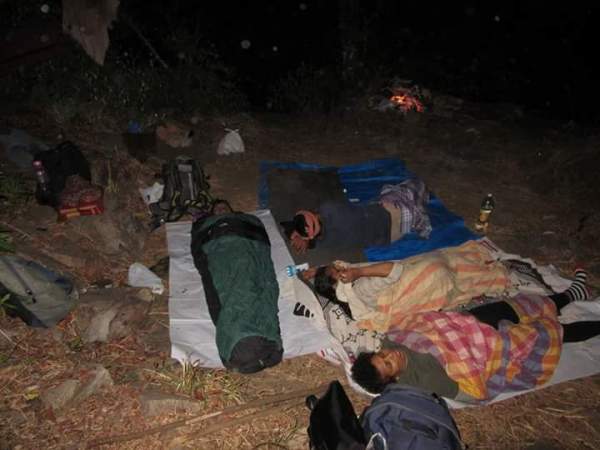 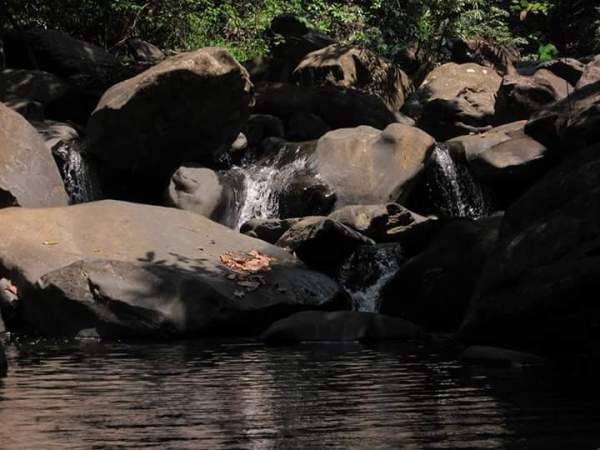 After a sumptuous breakfast and packed lunch we took off to Mundaje by jeep and began our journey from the foothills at around 9.30 am. After covering just 2 kms we were in the thick forest and guide Sanjeeva helped us for the first two hours of journey till we came across the stream in the middle of the forest. We came across elephant dung on the trail which means there could be elephants in this Shola forest range.

With high humidity and no breeze we were sweating profusely though our trekking pace was only moderate. Needless to say the stream we came across after about two hours was like a heavenly bliss. We bathed, got refreshed, refilled our water bottles and moved on our own as guide Sanjeeva returned from this point. We walked, talked, took pictures, ate fruits and chocolates to reenergise, enjoyed the cacophony of the birds and insects and had enough fun and frolic all through the trail. The thick canopy of the green foliage shielded us from the harsh rays of the sun during most part of the journey. It was almost 2 pm when we reached the end of the forest area. Now we were out in the open away from the protective cover of the forest verdure to the harshness of sun, nevertheless ready to savour the beauty of the golden grasslands that lay ahead of us. We were prepared for the twin challenges of climbing the steep hills and facing the harshness of the sun. It slackened our pace to some extent but that was a small price we had to pay in return for the treasure of greenery nature offered us from all corners. The distance was only about 3 kms but it took us nearly 2 ½ hours to cover it. The sight of the Bhandaje falls from this grassland looked quite tempting. By 4.30pm when the harshness of sun had subsided we had reached our destination. Here we here spotted the fresh dung of the Bison.

But that was not the base of the Bhandaje falls and to reach that we walked for another 20 minutes and then had to climb down a steep slope and there we were at the base of the picturesque and celebrated Bhandaje waterfalls. Situated at a height of almost 700 meters above sea level the waterfalls flows in between two hills and cascades from a height of more than 200 feet to give a real feast to the eyes. It was our good fortune that we had reached the spot in time to relish the intensified beauty of the waterfall amid the loveliness of the sun plunging into the horizon treating us with the splendour of its multiple hues.

It is not easy to watch the waterfall in standing position because the waterfall is almost perpendicular and the edge of the cliff has a downward slope with a smooth surface without any protection and therefore one has to lie on the stomach and crawl to the edge to peep down tightly holding the edges of the cliff. It sight deep down is scary but worth a million bucks because the spectacle of the waterfall surging hundreds of feet is down is paranormal and spellbinding. Two eyes are not enough enjoy the breathtaking ecological treasure of the Western Ghats from atop. It was spectacles that worth every drop of sweat and the risk that we endured to come to that pristine place. Those suffering from acrophobia should avoid such an attempt as it may prove fatal. There is another narrow path on the left side giving us the front view of the waterfall which is simply marvellous.

A quick bath after the sunset followed and we made arrangements for the campfire. There was a half burnt big log of wood which came in handy and we collected fallen small pieces of dried wood to light the fire. A light dinner of chapathis and bananas followed and we searched a level place under a tree, spread a huge plastic sheet and a few got into sleeping bags. As we were all tired we fell asleep within no time. The hooting of an owl from the tree above us and the flowing water on the stream was the only sound that could be heard in that calm, cool and serene atmosphere. But one by one we felt the chill that begun to envelope us in the early morning hours despite the fire burning bright. The chill distracted our sleep making us wonder whether we were in the dream world. The chill was so severe we wished we had brought thick blankets. We envied those who had carried their sleeping bags as they enjoyed a sound sleep.

Due to the bone chilling cold we were up earlier than expected the next morning. The rekindled the fire and drank warm water (instead of tea or coffee). The packed beaten rice from Indra Bhavan and bananas was our morning breakfast and we were ready for the return journey by 8 am. Return journey was as much or even more strenuous because it put pressure on our calf and thigh muscles. We covered the grassland within an hour and by 9.30 am we were once again in the thick forest. The return was as enjoyable as the ongoing journey and once again we took a break at the water point, freshened up and reached Mundaje by 12.15pm. We were exhausted, tired, famished and with diminishing energy waited for the jeep to reach Ujire. With a good lunch and tea/coffee at Ujire we reenergised our strength. By 4 pm we were back at our respective homes with an uplifted olfactory system and millions of memories to cherish for the rest of our lives.