Nana: Reel, Real and Human Side of a Gifted Actor

There are not many Indian actors who can play the character and the lead role, with the same ease, conviction and flawlessness. Since the late eighties three of the Khans have been dominating bollywood with unsurpassed fanbase across the country and rest of the subcontinent. But if one looks back into the concept of their films, there isn't a script or a character that has demonstrated socio-political realism in the country. Most of their films have showed them playing the larger than life role, with a escapist theme, and one that hardly connects with the common man and the real world. Apart from Nana Patekar, no actor has been consistently able to topple the three Khans over the last twenty-five years of their reign in the family-tree controlled Industry. 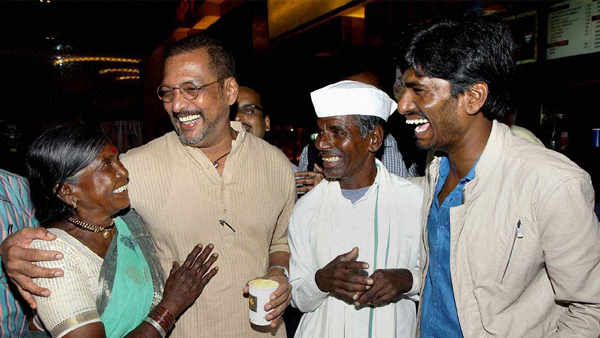 In these days, Nana’s decision to pay off loans of farmers and the initiation of his Naam Foundation to help and overcome drought situation in the state of Maharashtra, has grabbed immense attention, built consensus and solidarity among many writers, intellectuals and thinkers in the country. The words he used to express the ghastly water crisis and the tragic farmer suicides in the state during a television interview were extremely moving and powerful. He laments: "Massive migration to cities is taking place. And I want to tell everyone: If someone knocks at your car window, don't treat them like beggars". It manifested the actor's human side and the willingness to stand with the weak and the voiceless, and extend a hand during their worst hours, when the state and central governments stumbled, ignored and betrayed them.

Nana came into prominence with Ankush in 1986, a story of unemployed educated youth, falling prey to the vices of the society. He had a remarkably gifted delivery and an understanding of his on screen character. The years spent in stage, shaped and refined his image as an actor. Nana followed it up with playing incredibly tough role as an army commander in ‘Prahaar’ and an underworld don in ‘Parinda’, both in 89, winning him the National Award for best supporting actor. Such was the popularity of Nana, that he was touted as the highest paid actor in the industry. Unlike many of his chocolate boy contemporaries, Nana chose challenging roles, ones that demanded tremendous perseverance, observation, improvisation and training. In Krantiveer in 1994, he takes on the political heavyweights, their polarization led sectarianism, that shook the country post Babri Masjid demolition and the Bombay bombings in 1993. The film is mostly remembered for Nana’s passionate final speech at the execution platform, where he lambastes, satirizes and candidly makes references to the social and political ills facing the country and the impotence of the public. The following year, Nana orchestrated deaf-mute character playing opposite Seema Biswas and the father of Manisha Koirala, with whom he had an offscreen affair, in Sanjay Leela Bhansali’s musical classic 'Khamoshi'. The level of emotions and tenderness bought by Nana to the character stands immortal.

Although, in 2000s Nana continued portraying variety of characters, his comic timings were first exploited in 'Welcome' in 2007. The movie had big names of the likes of Akshay Kumar, Anil Kapoor and Feroz Khan, but Nana was able to outclass the typical Bollywood strongmen and storm the audience off their chair in laughter in his role as Don Uday Shetty. Perhaps, most critics reckon that one of his most matured roles have come of late with movies like Ram Gopal Verma's 'The Attacks of 26/11', playing the real life Rakesh Maria (joint commissioner of police, Crime Branch, Mumbai) and in Marathi films such as the satirical comedy 'Devool' and the biographical 'Dr Prakash Amte - Real Life Hero'.

The problem with Indian super stars is that they are just stars with their crowds, but certainly lesser actors. It’s agonizing at times, to see the steady descend of Bollywood Badshah SRK, over the last five years or so. The most recently released 'Fan' is a prime example of hype beating substance. The once famed King Khan, who often saved the film Industry during its rough box office times, has been consistently coming up with bad acting and below average movies. If it weren't for his massive female audiences, his production house would have been bankrupt by now. Never once in his twenty-five year career has SRK been able to come out with a role conveying a powerful social or political message. And this box office fear has trapped him off screen as well, making him and his rival stars to espouse ostrich mentality and bury their heads in sand, while their country bleeds.

By Chris Emmanuel
To submit your article / poem / short story to Daijiworld, please email it to news@daijiworld.com mentioning 'Article/poem submission for daijiworld' in the subject line. Please note the following:

Title: Nana: Reel, Real and Human Side of a Gifted Actor