A ROUTINE Chat with Eddie Uncle

It was a young Wednesday morning. The sun was lazily coming out from the east and Eddie uncle was pacing frantically back and forth in his courtyard. I could see from a distance and clearly something was wrong today. I did not dare go past his house, but I had no choice as my house was two blocks past his.

"Good morning uncle," I wished him, expecting a battery of verbal bullets towards me.

"What is so good about the morning, Anil." I was right. There was something wrong.

"Well. It is such a pleasant morning. Chirping of birds, cool breeze flowing, I am sure Cecilia aunty must have prepared some good breakfast too and look at you - you are burning some fat by taking a brisk walk. What is not to like about the morning uncle."

"You think I am taking a brisk walk?" Eddie uncle had a huge question mark on his temple. I had clearly misjudged the situation. The pleasant morning was soon turning into a unpleasant one.

"I believe so. Unless aunty has punished you for something." I have this habit of talking out of my behind, once in a while, especially with Eddie uncle. I don't know whether it is rooted from the fact that we have known each other for so long or from the fact that his sight makes my nerves tingle to give him back as much as I get. I mean verbally.

The look on his face said it all. I did not dare say one more word. Neither of us spoke for the next couple of seconds.

"What?" I broke the silence.

"Yes. System Error. This makes me uncomfortable for the whole day or at least until the moment till it happens." I clearly understood his situation.

"I agree Uncle. If it doesn't happen in the morning, then the whole day is more or less a waste. It psychologically brings one down."

"You too. Thank god, someone is with me in this." Eddie uncle sighed with relief and a little bit more. Without any remorse Eddie uncle continued, "What do you do Anil?"

"Look uncle. I have a system or rather a routine in place. As soon as I wake up, I wake up my system too with a big glass of water. The system realizes that the water is flowing for a reason. By the time, I finish brushing, the system is ready for the job."

"One has to train the system uncle. You are too old to do that now. Keep walking." I laughed aloud amidst some more noises from Eddie uncle. 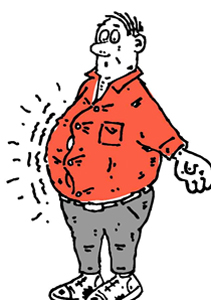 "After I began talking to you, there is some improvement. I think laughing and talking to you works for my system. Come home everyday." Eddie uncle had a trademark mischievous smile under his moustache.

"Huh. Do you take me for a fool. I have better things to do in life." I snapped back.

"Well, I too had a routine when I was young or say when I was in my early 40's. Two cigarettes and my system lit up. Ahh. Good old days."

"What crap Uncle. Cigarette smoking is injurious to health. How on earth could it fire up your intestines."

I was standing there, without knowing what to say. A little bit of show off earlier had now come back to bite me.

He continued, "You know my wife doesn't have any routine. She does it whenever the system is ready. I wish I could do it too. But in her case, there is always a scare of system being ready at unexpected times." Eddie uncle was giving more information than I wanted to hear. "You know this one time..."

"Uncle stop. I don't want to make this pleasant morning into a crappy one. Let us talk about something else."

"Ok." Eddie uncle had slowed down his pace and also gulped down a big glass of water." This water thing works Anil." He was visibly happy, while I wasn't.

He continued, "Well, do you know some other routines which could help me?"

Now that I had bragged about routines, I had to either say or make up a few innovative ones "Well one of my friend drinks hot water until his intestines can no longer hold it inside any longer. One of cousin has a spoonful of gulkand every night. I think it is more in the mind uncle."

"What nonsense. In the mind my foot! If it was in the mind, do you think I had to walk a kilometer and drink water."

The old man had a point. "Well uncle, you have a point. I think it is about building a routine. One of my uncles says as soon as first cup of hot tea goes into his tummy, he is happy."

"I have had three so far without any luck." Eddie uncle was disappointed.

"Well for some, inhaling fresh air can work wonders." Eddie uncle was in the meanwhile stretching.
"You better make or find a routine uncle," I advised him.

"I think I should. But since you came along, I am feeling confident that the issue will be resolved soon. Shoot. I have been talking like my grandson lately. These software engineers, I tell you. For everything they say 'No issues', 'issues resolved' etc."

"Hopefully it will be resolved soon. Let me go now." I was about to leave.

"Wait, wait. Where the hell do you have to go? Wait!" Eddie uncle stopped me.

"Uncle I have got lot of work to do."

"No one is going to die because of your work. Stay here until I am relieved from this pain."

I was frustrated now, talking about routines. "Uncle, shall we talk about something else? Do you know the JNU incident?" I diverted his mind.

"Yes. I wonder how those students and policemen stay without doing it for so many days." He was still stuck there.

Just then, there was some noise coming out from inside, where Arnab Goswami was shouting on top of his voice "The nation wants to know....." Poor guests who had come were staring at each other, while he was talking to someone remotely.

"Anil. I think I got my routine. I need to watch or at least listen to this man's voice every morning. Record it please. Wait here while I finish and come. Let's have breakfast together."

I had just lost my appetite talking about the exact opposite topics, but I knew Cecilia aunty was a good cook and I was sure I could smell amazing green chutney she makes. I nodded and continued watching Arnab and his madness.