Short Story: When Blood of Jesus Healed All Pain

In Him we have our redemption through His blood (Ephesians 1:7)

For the past twelve years, Aman has been serving the Roman Empire as the trusted guard of Pontius Pilot. His house is one on a quiet street of blooming trees, across the town of Judea. Aman was posted to assist in the execution of the criminals.

"I cannot be at service today my Lord! I am to take my wife to the hospital as she is seriously afflicted with multiple sclerosis. I ask pardon my Lord!” said Aman to Pontius Pilot.

"What! Off duty today? Impossible. That is indeed sheer irresponsibility. Today is the execution of the so called self-made king of the Jew; I command you to be at your place," said Pilot imperiously.

With utmost reverence to his master Aman left the court.

At the end of the day after the tedious work at Calvery, Aman rushed home to take his wife for medication. On his way back, he had many disturbing thoughts which engulfed him. He was feeling ashamed for the man whom he had crucified.

"Oh! It was not just," he said to himself. "He had done nothing wrong that deserved such a death. There was nothing so grievous which could justify his crucifixion."

"Oh! Those quibbles, insults, torments. Who has ever undergone such violence in life?"

"How pitiful was he! Impious rabble, we had to drag him to a cruel death, wounded, torn by stripes, crowned with thorns, streaming with blood, bearing the heavy cross.

"Ah! Grief of his mother beholding her Son! Who would not weep at seeing this Mother's grief? But who has been the cause of such woe? I, it is I, who with my own hands have so cruelly wounded the heart of that mother! And yet I was not moved; I was like a stone when my heart should break because of my ingratitude," said Aman and cried bitterly. 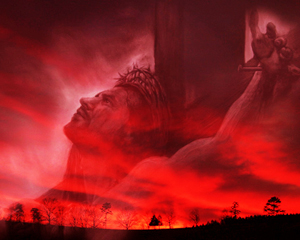 "How painful was that when he was nailed on the cross! On the other hand his mother. Sad is the sight of that dear Mother drowned in a sea of woe, seeing her beloved Son, part of her very self, cruelly nailed to the shameful tree of the cross."

Ah me! How every blow of the hammer, how every stripe that fell on that body I felt fell also on the disconsolate spirit of that mother.

"Oh! That moment when she stood at the foot of the cross, pierced by the sword of sorrow, she turned her eyes on him, until she knew that he lived no longer and had resigned his spirit to his Abbha. Her soul then was like to have left the body and joined itself to that of her son."

"What could I do? I could have stopped the flogging or dying? No, no, it was impossible. I couldn’t help this man. How graceful he was! He even forgave his murders. Truly he is the Son of God."

With all these irreplaceable disturbing thoughts, Aman reached home. Seeing the stains of blood on his coat his wife was terrified. With all her strength she embraced her husband and cried bitterly thinking that he has returned from a battle field mortally wounded.

Holding her husband she cried the cry of a wife who would lose her husband. As she kept crying she could feel a great relief in her painful body. She could feel a change - a change of life - a life of ease- a new life. All her pain vanished, vanished into thin air. What a relief! What a redemption from pain!
"I am healed," she proclaimed.

Knowing that the blood stains of Jesus had healed his wife, Aman threw himself down to the ground and wept bitterly.

"It was the blood of Christ that healed you," professed Aman.

"What did you do to that God man?" asked his wife.

"No it was not me," he said, "I was compelled to pierce his side. As I did, blood and water flowed out and my dress got drenched."

The wife was dumbfounded at the words of her husband.

"His blood has saved us dear," said Aman. God has forgiven my deeds, we are true witnesses of his saving mercy," he added and praised God.

Therein, began a journey of true faith in the life of Aman and his wife.

Anush D'Cunha SJ
To submit your article / poem / short story to Daijiworld, please email it to news@daijiworld.com mentioning 'Article/poem submission for daijiworld' in the subject line. Please note the following:

Title: Short Story: When Blood of Jesus Healed All Pain