It is not the mountain we conquer, but ourselves - Edmund Hillary

As rightly said by Edmund Hillary, my wife (Amoli Rodrigues) and me (Aldrin Pinto) both residing in London love to explore new places, cuisines, cultures, lifestyles etc around the world. Born and brought up in a small town of Udupi, we both completed our studies in Mangaluru and Bangaluru respectively and moved to London for future prospects.

Being avid travellers, we were searching for our next holiday destination. We always wanted to explore the beautiful and mysterious lands of Africa and we decided Tanzania is going to be the destination for us. We started our research on the things to do in Tanzania and we came across the Mount Kilimanjaro trek- A 5/6 day gruelling trek to reach 19,341 ft. This was the best way to challenge ourselves to get the best out of us. 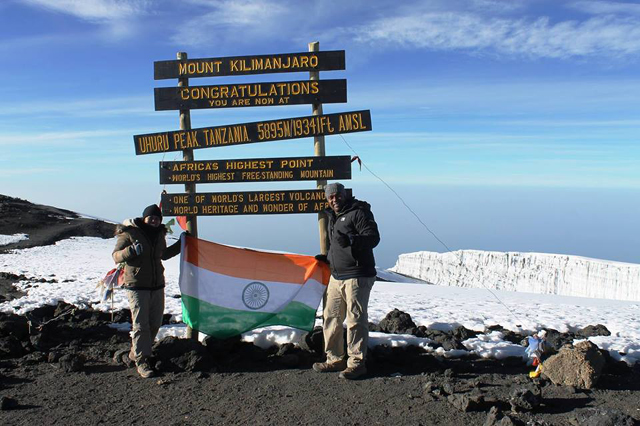 Mount Kilimanjaro is the tallest free-standing mountain in the worldand alsois the highest peak on the African continent. With its three volcanic cones, "Kibo", "Mawenzi", and "Shira", is a dormant volcano in Tanzania. It is the highest mountain in Africa with a height of 5,895 metres (19,341 ft) above sea level. Kilimanjaro, by any name, is a metaphor for the compelling beauty of East Africa. It is one of the world's most accessible high summits, a beacon for visitors from around the world.

It definitely was not an easy task as training to climb Kilimanjaro is as much about your physical endurance as it is about your mental stamina. We started our training 6 months before our trip. It included long uphill treks (minimum 10-13 miles), gym sessions, cardio/weight training, and following a healthy diet. Physical training is important as you will be trekking between 5-10 miles a day for the duration of your climb. The ability to draw on physical reserves as your energy depletes is key and more so when the oxygen level depletes at high altitudes.

Our goal in climbing Kilimanjaro is to get to the top, to be on the summit when the sun rises over the glaciers and the plains of Tanzania below and of course fly our tricolour up at the summit.

But what about the journey to the summit? What does that look and feel like? To answer that question, here’s our journey of the Marangu Route, from the trailhead all the way to Uhuru Peak, Mount Kilimanjaro summit.

We drove from our hotel in Arusha to the Kilimanjaro National Park gate and our journey passed through the village of Marangu, which is located on the lower slopes of the mountain. Once we reached the park gate, we were requested to sign in at the park office and make our final preparations for the climb. The porters were arranging and loading their packs, containing food, water, cooking gas as well as most of our equipment. We had to make sure that we had all our daypack items with us, as the porters ascend a lot quicker than us. 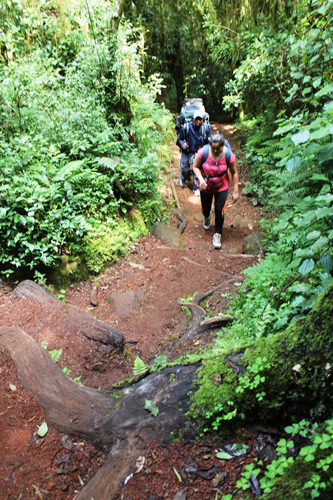 The climb began with Moderate intensity with gradual inclination and gave us a reality check of what is to come up in the next few days! It was a awe inspiring hike through the lush rainforestwith enticing glimpses of colubus monkeys in the canopy. Even though this stretch was relatively easy, we had to make sure to go pole pole (slowly, slowly) to tempo our body and reserve our energy for when things get tough. We reached the Mandara hut (2,720m) in the afternoon covering a distance of 5 miles in 3 hours. We then dumped our backpacks and trekked to the nearby Marundi crater with breath-taking views –This was done more to get acclimatised to the high altitude with the principle being Trek High and sleep low. The Camp itself was very basic but comfortable with the team cooking us a nice healthy dinner before we called it a day getting cosy inside our sleeping bags.

After our stay in the beautiful A-shaped huts, we had to make our way to the Horombo hut. The landscape now starts to change from rainforest to moorland and the intensity of the trek increase with your muscles pumping and the heart beating real hard. Once you are in the open moorland you will get the chance to see some of Kilimanjaro’s most spectacular plants – the endemic giant lobelia which grows up to 3 m in height and the giant groundsel (SeneciaKilimanjari), which can reach heights of 5m! The peaks began to appear, first the Mawenzi Peak and then the snow-capped Uhuru Peak in the distance-- our final goal in sight. After about 5 hours trek, we reached the Horombo hut (3,720m) covering a distance of 7.5 miles –staying overnight at the Horombo hut. 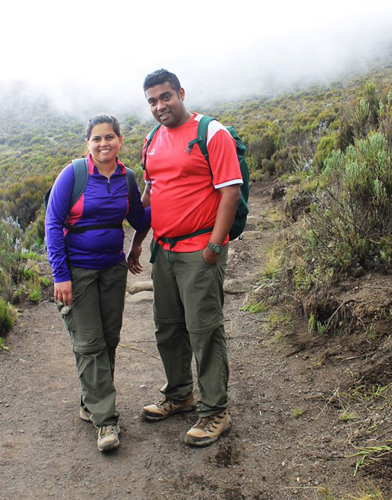 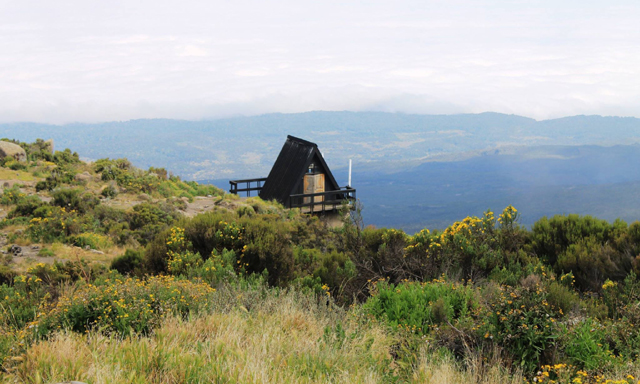 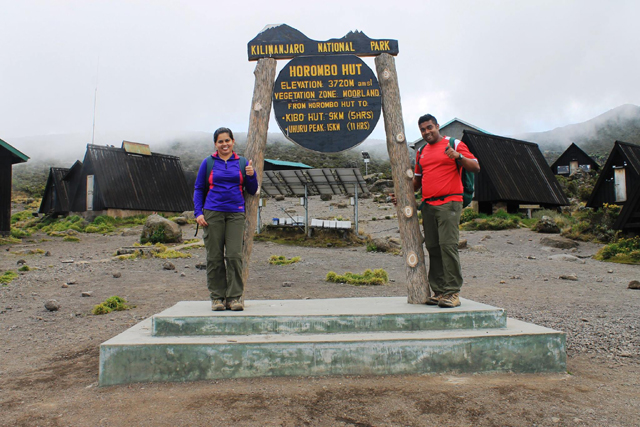 We had now started showing symptoms of the altitude. Some hikers took an extra day and night at Horombo for additional acclimatisation but we preferred not to as our goal was to complete the hike in five days. 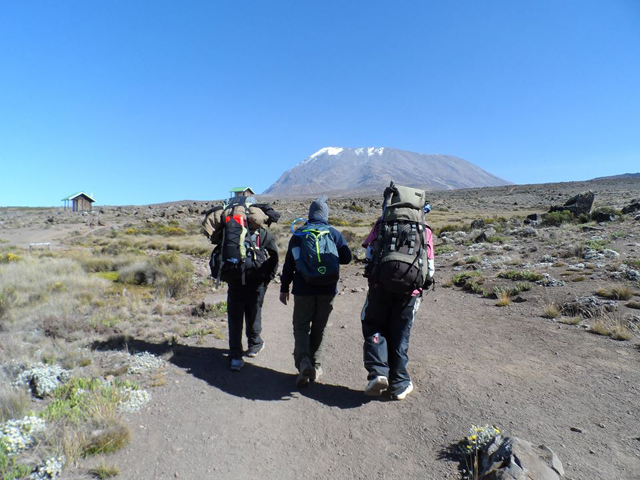 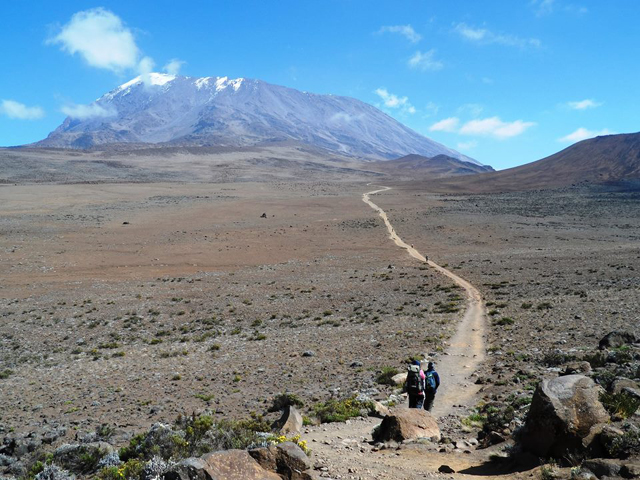 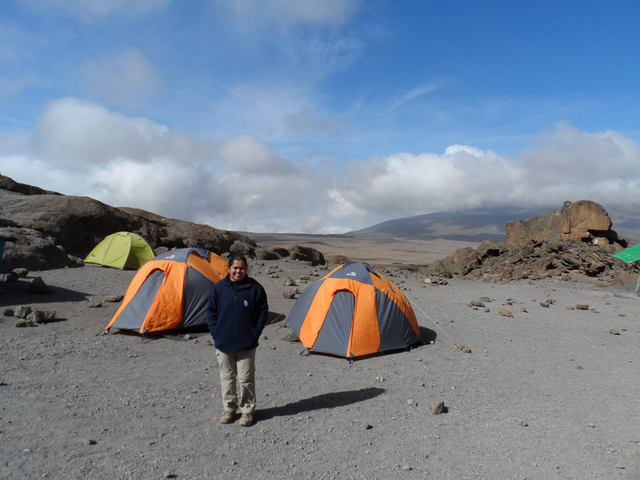 We passed the last watering point at 4130m. We had to fill our water bottles with all the water we will need until your return to Horombo hut in two night’s time.

After lunch, the walk became mind-numbingly monotonous. We passed through the never ending barren landscape covering a distance of 7.5 miles before reaching Kibo hut (4,703m). This part of the trek was very rugged on really punishing landscape-mentally draining. At this height, a simple job such as tying your shoe lace felt like the most exhausting job in the world.

Day 4: Kibo Hut to the Summit

We reached the Kibo hut and were advised to have an early dinner (4 pm!!) and get some sleep before we start the summit—but Sleep was the hardest thing to get! We did meet a lot of hikers from various countries sharing their experiences and all excited for the final Summit Hike. 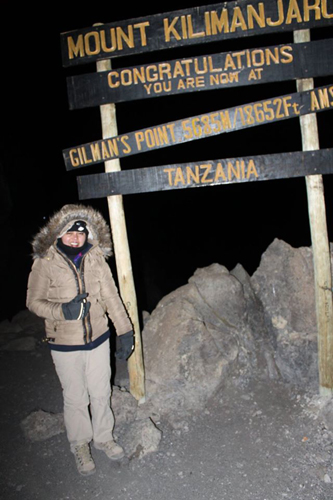 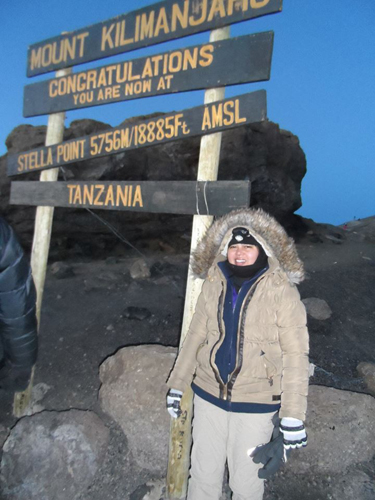 We were woken up at 11 pm after a few hours of less-than-ideal, high altitude sleep. Our appetite was lost by now but we were forced to eat as much as we can to store up energy for what’s ahead. With four layers of clothing to bear the freezing temperatures, a headlamp, water reserves and a dizzy head, we began our walk for the final ascent in the pitch dark. Our guides continually reminded us to go “Pole, Pole” (slowly slowly).This park of the trek was the most hardest with very steep inclination and with very less Oxygen it was by far the most gruelling and the furthest we remember pushing our bodies physically and Mentally. This continued for the next five to six hours until we reached Gilman Point (5,681 m).

At Gilman’s point, we rested for some time and continued our hike to Uhuru Peak (final point).This is where the going really gets tough where you require great physical and mental effort. 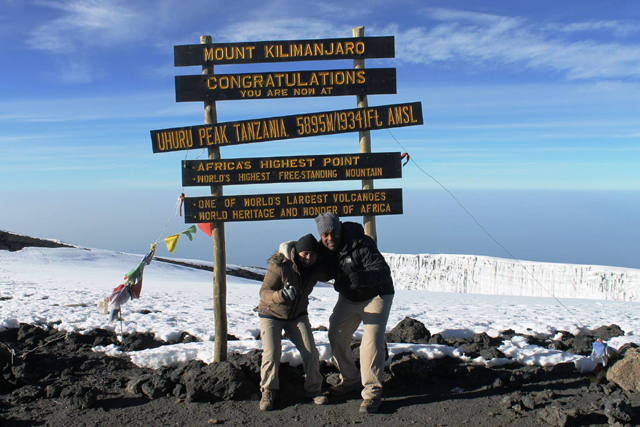 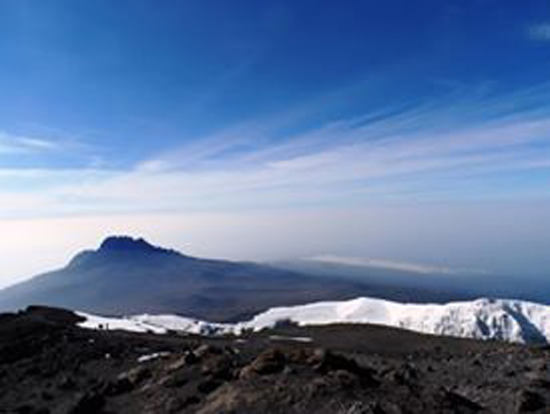 Another 90 minutes or so later, we reached Stella Point (5,730m/18,800ft) and the sun began to appear on the horizon above the clouds. This was our first peek at the Kilimanjaro glaciers glowing in the early morning sunlight.

Then finally, we made it to the Summit, Uhuru Peak (5,895m) at approx. 7 am. Our fatigue was forgotten and adrenaline took over. We were on top of the world’s highest free standing mountain! Knowing that we both made it to the top made the achievement much sweet. The Breath-taking scenery across the glaciers and the feeling of flying our tricolour at the summit made it all the more sweeter

The views were even more impressive than we imagined. It’s dangerous to spend too much time at the top where weather can change quickly and oxygen level are very low, so our guides encouraged us to begin our descent. The descent was ofcourse easier but had to be careful because of the steep decline and loose rocks.

We returned to the Kibo hut and after a short rest for lunch, started the descent to Horombo hut.

20 miles of walk in a day with only 4 hours of sleep never felt so satisfying! We stayed overnight at Horombo and for the first time in the last 4 days we got a good night’s sleep.

It was a long way down and we started early as we wanted to get to our resort and rest up. It was really saddening to see the Kili peaks disappear as we headed down. 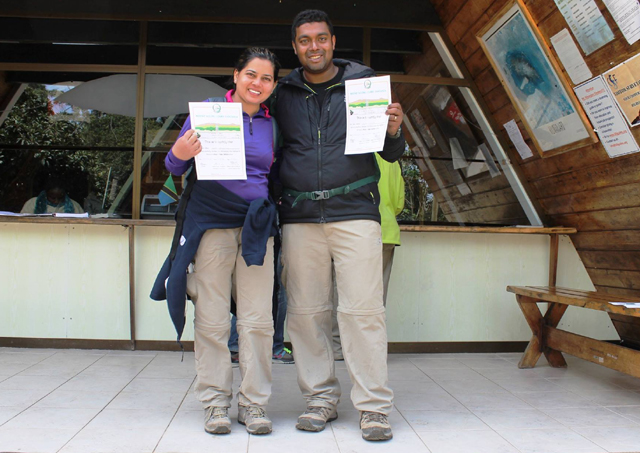 Filled with memories and emotions, we reached the Marangu gate where we received our certificates for the successful climb to the summit—all worth it and bid adieu to our wonderful guides and porters without whom this trek wouldn’t have been possible.

Video of our Kilimanjaro journey:

By Aldrin Pinto
To submit your article / poem / short story to Daijiworld, please email it to news@daijiworld.com mentioning 'Article/poem submission for daijiworld' in the subject line. Please note the following: