It had been a long time since I visited a zoo and when I recently did, it took me on a deep thought provoking journey through a chaotic turmoil called life.

It was Children's Day and as a treat to my nephew, I took him out to the zoo. He was excited as this would be the first time he would see animals in cages and I was thrilled too, as I was visiting my friends in there after a long gap of 10 years. The zoo tour began well . The weather was fantastic as winter was just setting in. The phrase from the hit series Game of Thrones "Winter is coming" was reverberating in my ears.

We moved past tiny cages of birds. There were a few lucky ones in bigger cages, trying to topple their inmates perched at the roof. The Snake and Reptile section too was fascinating. All the dangerous snakes had found their favorite corners and had coiled cozily. There was an enclosure which had more than three snakes and all the three were at three different corners. I felt pity for the snakes - creatures which would have caused considerable fear among masses were now next to harmless. They had a blank face.

We moved past them to the most visited enclosure of the zoo - the tiger enclosure. A Royal Bengal Tiger was prowling around the enclosure and seemed restless. The tiger looked thin and I wondered how would it have been without the steel bars separating us. All I could see was the tiger's blank face, desperate to get out of the cage into the wild.

As my nephew and I were watching the tiger's swagger, my brain began sending waves forcing me to relate the caged animals in the zoo and the ongoing, snow balling phenomenon of exodus from certain countries - politically called "Refugee Crisis". I was able to draw similarities between the two. An animal is hunted and plucked out of its natural habitat, put in a cage for someone's greed, whereas people, born and brought up in a certain country, which they thought was theirs are suddenly forced to flee to neighboring countries for someone's political and power greed.

The comparison in the previous paragraph roots from my first hand experience with a refugee family whom I met on the streets of a famous old culturally rich city. There were thousands of people or should I say refugees, estranged from the families begging, but this family of three attracted me the most - the head of the family: a handsome looking gentleman in his early thirties, his wife - an elegant pretty lady, and their baby - a toddler, possibly one and half year old. The family looked like a well to do, upper middle class family with a decent income back home. But now they had no place to go. The handsome man looked frustrated and yet wasn't able to do anything to provide a shelter to his wife and kid. I just can't forget his handsome face. When I spoke to him, and he replied to me, all I could see a frustrated desperate heart of gratitude and yet a blank face. I dread to think of what would have happened to me if I were in his situation.

The tiger in the zoo, desperately prowling within the cage immediately reminded me of this handsome family. This family had not done any wrong, yet were stripped off their dignity and forced to flee to some other country in which they were not welcome. 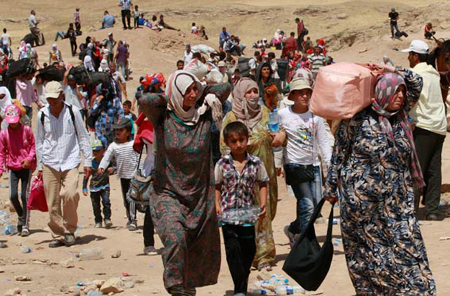 Similarly, my wife and I met many more refugees, who did not know what to do, did not know what future lies in front of them. Some begged for food, some sold water bottles, some just sat outside the stations staring at the oblivion. What struck me most was the plight of children. At an age they should be playing in the fields, studying for their exams, eating their stomach's fill, here they were begging for money to get one small piece of bread. If you think, the money they earned or begged for was used to buy food, you are wrong. The money went to buy their pass out of this country to Germany or any other European country which had camps and welcomed them. Yes, children starved for days to get their tickets out of this misery.

People are fleeing from Syria, Yemen, Iraq and many more middle eastern countries and Asian countries like Afghanistan and Pakistan. If we talk about Syrian crisis, at the current point in time, I believe no one knows what they are fighting for and against. The government supporters, the rebels, the terrorists are all indulged in random killing. Some mighty countries are using Syria as a testing ground to show case their wartime toys. I do believe that the victims are people who don't take a side - the middle class, upper middle class and the working class just like the aforementioned handsome family. The people who pay taxes, follow rules, are the victims. In the same big world, at some corner, there are wealthy people investing money, securing the future of their unborn descendants, whereas in some other corner, there are families struggling to live. Isn't it the same in our own country as well ?

What is wrong with our world? The question needs to be answered by us. To summarize, I would like to quote a friend, whose name better be undisclosed: "Everyone is killing to protect their gods and countries. It seems like religion and nationality is the root cause for all the wars and trouble. No one seems to be fighting for the devil". I found this statement so true and humorous when spoken about in an Indian context, where we fight and kill each other over mundane things like food and dead old kings. Every religion unites people, teaches tolerance and helps us lead disciplined lives. But when a few fanatics take religion to extremism, there is something to worry about .

Every attack on mankind - be it the Syrian crisis, be it the Kenyan mall attack, Paris attack, Mumbai attacks, Beirut attack, September 11, Rwandan genocide, Godhra massacre, Babri killings, and even the infamous Mangalore pub attack - all these have happened due to some kind of sect favorism. Only when one raises beyond religion and nationality, the world could be a better place to live.

There are blank faces everywhere and what worries me more is the thought of that impending day when someone sees my blank face among the thousand blank faces.