Just recently, it was shockingly revealed that Indian television Channels would be soon telecast in Bhutan, the only country having the Gross National Happiness (GNH) Index. In a desperate bid to rescue the neighboring happy nation, a sane Indian's advice to the Bhutan government would be, "please shut it down, you have the reputation of being the happiest country, and most Indian tele buffs are the most depressed, dejected and aimless creatures in the planet".

If a sound minded or a moderately intelligent man, comes across an Indian reality show or a soap opera on television, he would be forced to hurl the remote at the screen; such is the level Indian programmes have stooped to. Gloomily, this indicates that dance, singing and bad humour are the only disciplines, where the privately owned multinational channels can exploit young talent. The Indian television empire which is estimated to have worth five times more than Indian film industry, is also serving as a career saving shield to many jobless and mediocre Bollywood faces. 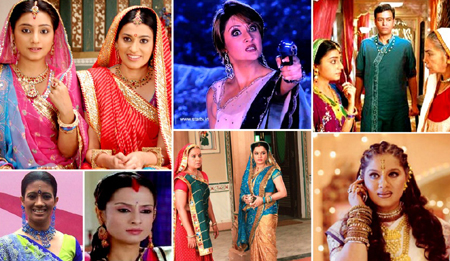 Nevertheless, prime time shows have become household favorites among millions of middle class audiences. Interestingly, it mirrors the jerry-built mindset of the viewer rather than of the creator of the shows.

The soap operas, short serials, reality shows and private news channels disingenuously promote sensationalism and hyperbolism. In addition, they advertise religion, orthodoxy, superstition, outdated rituals and apparently also glorify them full scale, creating a major hysterical impact on the adolescent and younger viewers. There isn't a single show depicting social realism or societal evils that have been haunting people in their daily lives; neither has been a genuine attempt to endorse reason and rationality through a creative format. Everything that appears on television screens has to be sensational, colourful, flamboyant and noisy; the room for creativity, subtlety that had embellished the Indian television in the eighties and the early nineties has crumbled and shrunk with the weight of colossal corporate finance. Therefore, there isn't a Indian channel on the lines of Animal Planet, National Geographic or Discovery.

The noisiness image has been more fittingly associated with the Indian electronic media. The concept of interviews, group discussions and debates between various representatives that had once brought authenticity and honest thrills to television media has now transformed into a fish market melodrama, under the greed of increasing TRP. The news anchors faintly mediate the discussion; they become part of the discussion, by amplifying and roasting it to the point where the guests become incensed, animated and almost up in arms.

Shoddy and frivolous stories like the celebrities' personal lives, high society crimes and Pakistan bashing make the headlines and prime time topics for panel discussion; the more essential needs like food, clean drinking water, sanitation, education and issues like farmer suicides, women empowerment and safety, eradication of poverty, child trafficking, religious orthodoxy and extremism are brushed under the carpet. But then, these channels are reproducing exactly the sort of things people want to look at, ear and savour, just as the TRPs clearly recount. As one media moghul had spectacularly brushed off his critics saying "Nobody is forcing it (TV shows) down your throat, if you dont like it, then dont watch it".