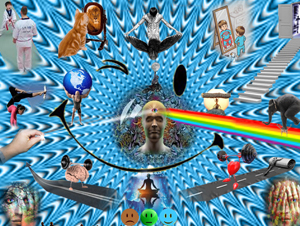 Thoughts erupt from this little space, like a soda fizz
Spurting all around; aimless and directionless
Moments pass in deciphering their true meaning
Sometimes even a life time

Big revolutions originated from this illusive space
So were the ends of civilizations
No one knows where it lies, or what it wants
Yet one obediently surrenders to its injunction

Bombs and missiles were invented by this doodah
So were the space ships, life jackets and the delicious falooda
It has a sweeter side too, that binds humanity together
The dawn, that we are the birds of same feather

Love blossoms owing to mind’s masterly art
Then why is all the credit taken by the heart?
Mind it is, which can instigate or shatter a relationship
All boundaries of passion it can outstrip

With consciousness and deliberation, this space can be tamed
For your behaviours and actions, mind is not to be blamed
It is you who is the life’s sole captain
Mind is just the helm that steers you to your station.

By Annie Dimple Castelino
To submit your article / poem / short story to Daijiworld, please email it to news@daijiworld.com mentioning 'Article/poem submission for daijiworld' in the subject line. Please note the following: