I had a seminar at Lokhandwala complex in Andheri in the month of January. It was aimed at creating awareness and defeating the fears. When I questioned the participants about a few other issues that bother our daily life and limits the growth, the word 'regret' dominated the list. In this article I am trying to shed some light on The Regrets; the baggage of our past actions and its impact on our lives at present.

One of the fundamentals of happy life says that “There is no point in regretting a decision taken at a particular time. It is because whatever decision we made is the right decision under those circumstances. It may not look wiser after sometime. It is because as time passes, our circumstances also change. Human tendency is always to take the right decision, whatever he/she feels right at that particular moment. Even an action which looks bad for others may be a right one for the person who is under a particular situation. We usually comment from a distance without being in that situation and without knowing what the person is going through.

Remember readers, under the light of new exposure, new learning learnt through life, most of the best decisions also have a chance of coming under the shadow of regret in the future. That is why it is always advisable when we try to rectify things of the past (mostly so when we try to reconnect with lost relationships), we should consider the present as the priority and should take on from there rather staying stationary in the past. Simply because we can’t get back the time and situation of the past on which certain decisions were made.

Regrets are nothing but dragging forces. They may not halt our progress as such but definitely may cut down the pace. The impact of past may not allow us to strike a right decision at the right moment in the present also, leading to some unpleasant situations.

When does an action of ours enter into the list of regrets? It is when we fail to act on the defective decision we have made. It’s our inactive state of mind that should be regretted rather than the action, because most of the time it’s not the action but the motive and the type of process we employ before the action and laziness after it, that make us regret.

Generally we have a tendency to put down the “near miss” incidents in life. These are the signals coming from within, cautioning that something is going wrong. When we down play these warning signals we land in trouble. 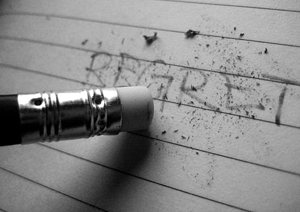 We should always remember that most of the times we may end up with what we actually wanted, but a few times we may initiate an action but its end result may not match our designs or dreams. It is not in our hands always. There is no point in regretting in such situations but to move forward with new experience with the same initial pace. In such situations we should consider the motive/intentions of the action rather than the end result. If the intentions are good and result is still negative, there is no point in getting stuck.

Life throws many tough situations toward us. Sometimes we fall into heavy confusion, unsure whether to face or fly. By attempting such situations will reduce the regrets rather avoiding it. It is because if we do not attempt we do not stand a chance of getting what we want. Many a time, actual happening is beyond our reach, it may either be positive or negative. Thinking that result would be negative (perception) if we do not make an effort we definitely will be the loser. Whatever the end result, by attempting at least we learn a new lesson that will result in developing a more matured personality.

Regrets of not attempting and losing are much deeper than the actual regrets of failure, if any. Should we not regret? We should. But that should lead to more maturity, new learning and understanding rather than being dragging force. Those regrets should be building blocks for future's positively intentive actions, irrespective of the results. Because most of the times our own deliberate actions give us huge disappointments.

We encounter difficulties and pain not to keep us down, but to conquer them, learn from them and do our best possible from the learning. Regrets are often rectifiable. It is not the end result. Almost every action of ours may be corrected. I have often witnessed majority of the people despite knowing that they are at fault don’t take any action to correct it. If the time spent on regretting is used in rectifying the mistakes, we would not have the possibility of regretting anything. Often we don’t do this and look at others for possible solutions as if it is someone else’s job.

We should learn to value the intention of our actions; result may be good or bad. People who regret are generally those who did not learnt anything from their past experiences. Let us do best to our ability with good intentions and move forward.

Recreation is a small word with huge impact. A person who knows the art of recreation hardly regrets. Invest the time we spend on regrets in recreation. Regrets never pay but the learning does. Regrets remain as regrets only when we fail to learn from them.

Every second we are moving towards death. We will perish one day, no one knows when, where and how. In the light of this truth do we regret our birth, our existence? Not at all. Don’t take and treat life as a punishment, it is to rejoice even when we pass through very a difficult phase.

In July one of my companions went to India for his son's admission to an engineering college after a year long planning about how to proceed, what to select considering many parameters including his son’s weak command over certain subjects. When he returned, I was shocked to learn from him that he selected the very same stream which we had ruled out. The reason is even more astonishing. One fine day he met a person working as a clerk in an engineering college in Mangalore who advised him to go for that particular engineering branch since majority people select that. So my friend also wanted to be one of them and ignored all the things which we were discussing for months. Here the problem is what made him select that branch. He fell for an isolated person’s advice who is not at all exposed to outside competitive world; my friend not only ignored his own experience and exposure but his son’s abilities also.

This above small illustration is sufficient to understand why we face unpleasant situations in life. Who is responsible if this student fails to progress in his studies? Needless to say, emotions play a very important role while taking certain decisions in life which may take our entire life span to recover from. One minute's meeting with a wrong person made him sideline all the year long planning in a rush to give his son the best which was not the best at all. Clouds of emotion covered rational thoughts in a minute’s time and the results may be a life long punishment. Having control over one's emotions and pressing more on rational realities will help in the long run and may play a vital role in overcoming the mistakes.

To lead a happy life it is not only IQ which is important but managing emotional intelligence (EI) also play a very significant role.

When I was reading a book on Psychology I read a very important sentence that changed the direction of my life. We can avoid all our tomorrow’s regrets, remorse’s, pains and sorrows related to our actions by concentrating on onething, by checking on the actual process, “how we do, what actually we do”. You will be surprised with the end result. Because 90% of our actions we do not do the way they should have been done which eventually leads to regret later. Most of the decisions are based on indecisions, confusions, faulty advice, influenced by wrong environment and so on.

Our own understanding of the problem we encounter is very vital which we ignore often. Originality is totally missing in majority of our actions. Generally when we commit a mistake we hesitantly accept it and we behave in such a manner that the solution part belongs to someone else. Be the boss of your problem and the solution as well. Getting advice is welcome and needed, but we should remember the fact that those people are not facing the actual situation. It’s we and our understanding of the problem and action that counts. That’s why when we seek advice and direction, see that they are professionals, resourceful, indifferent and are not emotionally connected to us in any way.

Before concluding let me repeat that very important sentence above again, which may help you change the way you look into your life; before doing/taking an action kindly check how you do what actually you do and do the right thing. Simply, “check the process of an action we actually do for the right steps taken”. It is about putting the process under the microscope; processing the process itself. I am sure you won’t be having anymore regrets in life.

Some of the regrets that bother us in life are when we fail to keep pace with the changing scenarios around us. Changes are integral part of our life. If we want to improve we should learn to welcome changes.

We may be having a big list of regretful incidents in life. Behind every such incident/action the culprit is the same always and the mistake is unique; we don’t employ the right process.

By Vincent D'Sa, Shankerpura/Dubai
To submit your article / poem / short story to Daijiworld, please email it to news@daijiworld.com mentioning 'Article/poem submission for daijiworld' in the subject line. Please note the following: