Apart from the 2009 pub attack and 2012 home stay attack which caught the eye of the media, there are several other cases which have not been heard of in the coastal belt of Karnataka. According to the data collected by the Karnataka Communal Harmony Forum there were 45 moral policing incidents in 2013, 39 incidents in 2014 and 10 incidents in 2015 so far. 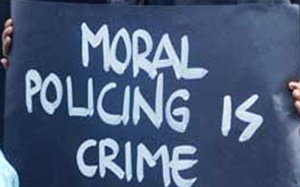 In the recent incident a Muslim youth was thrashed for being with his colleague who was from the other community. Another incident was the attack on a party in a reputed hotel in Mangaluru on September 26 where the so called 'activists' with the police raided the place and asked the women to vacate and the men to continue partying. The move of the cops was appreciated by the Bajarang Dal's Mangaluru head.

There are no set of hard bound rules on Indian culture. It is not part of the culture to keep women caged inside the house without any contact with the outside world. The same culture worships goddesses yet they fail to respect women.

Freedom according to the Constitution is the same for both men and women. The police is supposed to protect the rights of citizens, not help these goons. A vigilante group cannot take matters into their own hands if the police isn't ready to co-operate.

The cases of moral policing have increased which puts Mangaluru to shame. Women are scared to even go out with their brothers with a thought that they would get beaten up like the rest.

How can Mangaluru be in the list of 'Smart Cities' when such activities take place? Widening roads, building malls and flats do not make Mangaluru a Smart City. When the citizens of Mangaluru are open to change, broad-minded and are willing to work with one another specially from a different religion, there will be peace and harmony. Only then can we say we are on the process of being a Smart City.

By Niva Shetty
Niva Shetty is from Mangaluru. She is pursuing her 1st year MA in Mass Communication and Journalism in Nitte Institute of Communication.
To submit your article / poem / short story to Daijiworld, please email it to news@daijiworld.com mentioning 'Article/poem submission for daijiworld' in the subject line. Please note the following: