Mangaluru Smart City Should be Inclusive

"With our days and nights increasingly stretched across the vastness of megacities, we've turned to these smart little gadgets to keep it all synchronized. It's no accident that the most common text message, sent billions of times a year all over the world, is "where r u?" - Anthony M Townsend in Smart Cities: Big Data, Civic Hackers, and the Quest for a New Utopia.

Anthony Townsend, author of the book noted above, published in 2013, is an American researcher specialising on cities and public institutions. The smart ones will not miss the last words of his book title: New Utopia. Utopia, as most readers would know, is a community or society possessing highly desirable or near perfect qualities. The word was coined by Sir Thomas More in Greek for his 1516 book Utopia (in Latin), describing a fictional island society in the Atlantic Ocean.

The 100 smart cities India is seeking to build, with Mangaluru being selected among the first 20, are far from brick and mortar entities, beyond including power-saving green buildings, but digital-based technology-guided cities as reflected in the following summing up by Eduardo Paes, Mayor of Rio de Janeiro: "Smart cities are those who manage their resources efficiently. Traffic, public services and disaster response should be operated intelligently in order to minimize costs, reduce carbon emissions and increase performance".

This is far from the image conveyed by newspaper and magazines which illustrate their articles on smart cities with photo-shopped mixed images of cityscapes of Manhattan and Washington with their broad avenues, skyscrapers and stately mansions. So, once the initial confusion cleared about smart cities, who and how will citizens of smart cities benefit? If our past record is any guide, it typically would be to 'those who have, more shall be added unto them' and slum-dwellers, for instance, will take the hindmost. 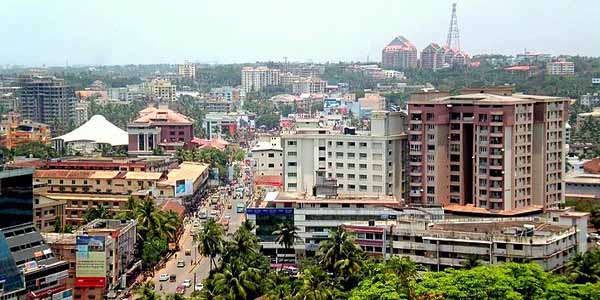 While netas and babus salivate at the prospect of having their cut of the Rs 500 crores coming their way over a five-year window, the incoming financial bonanza will be partly available for creating and upgrading material and social infrastructure for the benefit of the citizens at large. The basis of allotting these benefits should be the one laid down by Jeremy Bentham (1748-1832), British jurist, philosopher and legal and social reformer: "The greatest happiness of the greatest number is the foundation of morals and legislation." Since Bentham's time, this principle has been widely invoked as basis for political and civic action - many times reiterated by Mahatma Gandhi. Yet, this principle is ignored by Mangaluru Municipal Corporation (MMC) in its civic actions in the city. (Perhaps our civic netas and babus do not want Gandhiji to see their perverted deviation from this wholesome principle to guide their actions - so they have allowed the bust of Gandhiji in front of the civic headquarters building at Lalbagh to be without his specs!).

What are the examples of opting to favour the few elite instead of the mass of citizens or the janatha? Despite the time and budget overruns, and the leakages, Mangaluru can boast of many concreted roads. These blessings are conferred on a few thousand motorists. But what happens to the pedestrians in their tens of thousands, including senior citizens and school children? Where is Bentham's principle of the greatest happiness of the greatest number when it comes to safe and walker-friendly footpaths?

Let us take another case - the Development Plan of Mangaluru Urban Development Authority (MUDA) which has drawn up a plan for the extended city up to the year 2020. Among civic amenities, MUDA recognises the need for "adequate facilities for active and passive recreation for the people". It elaborates: "Recreation facilities play a significant role in the life of the urban population. The people are generally absorbed, most of the time, in their urban activities and they need change for a while to refresh themselves, so that they can return back to their routine. For this purpose they need active and passive recreation facilities accessible to them. The active recreation facilities like playgrounds, swimming pools, etc., and well-maintained parks play a very important role in this regard. They are also lung spaces in the urban areas."

Against this lofty statement, of the total planning area of 30,600 h, the area earmarked for parks, playgrounds and other open spaces is a mere 262.35 h (2.2 %) - even after wrongly including the vast gated Pilikula Nisargadhama. The following table brings out the bleak situation in this respect.

Table showing Planning district-wise percentage of land use for parks, playgrounds and other open spaces existing (2001) and proposed: total:30,600 h; for playgrounds, etc. 262.35 h (2.2%)under Master Plan for local planning area approved by the government on October 10, 2009. 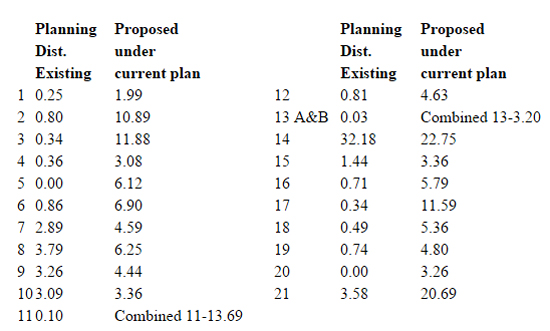 Even these statistics are deceptive considering that many reserved plots may have been casually reserved in a table-top exercise and might have got de-reserved by the concerned owners. Secondly, encroachment, often with the connivance of civic authorities, is the bane of urban land use. Thirdly, there could be wrong use or non-use of the reserved plot for purposes for which it was meant in the MUDA plans. Incidentally, it is widely held that 15% of the total area has to be reserved for the above purposes and planning authorities prescribe this percentage for private land developers for layouts.

One glaring case comes from Kadri Park. The large plot is spread over two sections - one to the south of the National Highway and the other to the north. The south section is maintained in tolerably usable condition, especially thanks to the efforts of local MLA JR Lobo, while the north section is totally neglected, but for a skating rink, and is not usable and not used by the public. This is contrary to the provision of Section 7 of Karnataka Parks, Play-fields and Open Spaces (Preservation and Regulation) Act, 1985 which states, "the local authority concerned shall maintain in a clean and proper condition all parks, play-fields and open spaces belonging to or vested in it." Also, section 6 provides, "No park, play-field or open space.shall be used for any purpose other than the purpose or purposes for which it was used on the date of commencement of this Act in such area". Apart from Kadri Park (north) being allowed to go to seed, a petrol pump has encroached on a large chunk of this park. The outstanding case of misuses against section 6 noted above is the Nehru Maidan, with encroachments galore and holding of exhibitions which has been challenged in the court.

So, what do we citizens do about it? Like eternal vigilance is the price of liberty, it is also necessary to be vigilant about civic developments that impinge on the rights of citizens and damage the quality of civic life. Fortunately, the Acts provide for the involvement of citizens. The karnataka Town and country Planning Act,1961 mandates (section 22-4): "the Planning Authority shall then publish in the prescribed manner the comprehensive Development Plan and the report as finally approved by the State government. The Plan and the Report shall be permanently displayed in the offices of the Director and the Planning Authority and a copy shall be kept available for the inspection of the public in the office of the Planning Authority (e.g. MUDA at Urva Market). The Park Act is even more specific regarding publication and display for public information the list of parks, play-fields and open spaces. In the case of Mangaluru, the obligation falls on the Assistant Director, Town Planning at Corporation headquarters at Lalbaghh.

So, what can concerned citizens do to protect existing civic amenities and secure more to make up for the woeful deficiency in what is currently available? The first step is to evaluate the current situation by studying the CDP for the concerned area by approaching the MUDA office and the MCC in the case of parks and open spaces. It should be checked whether a playground is 'public' and if not pressure MUDA and MCC to secure it through the acquisition route. Till then intensively use the space so that possession or use strengthens the right and ground for acquisition. Also, check if public purpose spaces are put to different use through encroachment, change of user, etc. In all this architects have a moral responsibility to give the lead to citizens and the Architects' Guild in Mangaluru should rise to the occasion.

To come back to the allotment of resources and targeting beneficiaries under the smart city regime, Bentham's principle of greatest happiness of the greatest number should be followed. If this is applied, if space is available is either for a tennis court or a badminton court, the authorities should opt for badminton court because tennis is considered an elite game calling for expenses which the janatha cannot afford. Similarly if the choice is between golf and providing access to the sea for the fishermen, as is the situation a Bengre-Kuloor, the choice should be in favour of fishermen. The votaries of tennis largely comprise the elite who can establish and access their sports sites away from the city - and need not tax public spaces meant for the janatha.

A dramatic real-life case is presented by Bondel Maidan (officially not named), located in the middle of the Government Housing Colony. This 10-acre playground was carved out by levelling a low hillock by private initiative, mainly of a retired MMC official, Padmanabha Ullal. Now it is a real estate gold mine with a market value of Rs. 200 crores, The state-level cricket association has been angling to swallow it up exclusively for a gated cricket stadium to the exclusion of all other sports including as walking track for the local janatha who have no recreation grounds within a radius of ten KM.

George Bernard Shaw (1856-1950) Nobel prize-winning Irish author, said: "Cricket is a game played by 22 fools and watched by 22,000 fools." Bernard Shaw didn't reckon with TV coverage of cricket which takes place even in small towns via cable TV - with often empty stands. Yet our netas in power offer the maidan to the said Bangalore-based cricket association as if it is a piece of cake. 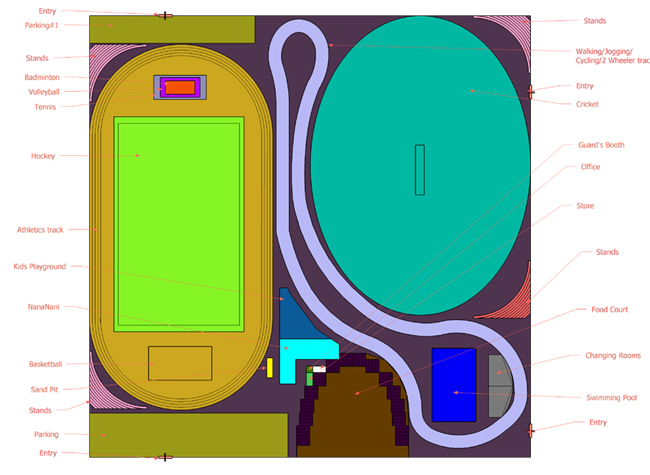 This is being opposed by local janatha who have been fighting for a multi-purpose playground under the banner of Bondel Maidan Development Samithi. It has drawn a computer-generated site plan to host several games and sports activities. The plan includes playing of cricket as also hockey and football by just shifting the goal-posts - literally .It also provides for walking track, badminton, shuttle and volleyball courts, sandpit for high jump, long jump and pole vault, swimming pool, store rooms and changing rooms, kids playground, Nana-nani park and a food court for social interaction. The ground would be available to the educational institutions in the area which have a student strength of over 5000 and have no captive playgrounds of their own.

The image above shows the tentative vision of multiple uses of Bondel Maidan.

To conclude, the smart city mission would involve saving Bondel Maidan - and other recreational facilities - for the janatha and thus add to the quality of their civic life.

Veteran journalist and author, John B Monteiro now concentrates on Editorial Consultancy, having recently edited the autobiography of a senior advocate, history and souvenir to mark the centenary of Catholic Association of South Kanara and currently working on the history/souvenir to mark the platinum jubilee of Kanara Chamber of Commerce & Industry.