A steady downpour of rain, a cloud cover which had put the sun out of sight, the ceiling fan crackling now and then, while cooling the air around its rusting blades and a heavy lunch of fresh fish and a mountain of rice. Well what more could have Eddie uncle asked for? He was fast asleep within minutes after he lied down. Usually a power nap taker in the afternoons, today, Eddie uncle let it all go - he was a log and there were noises coming from everywhere, especially from his nostrils transporting him to some kind of wonderland and in the meantime transferring Cecelia aunty into the next bedroom far away from his snoring, pot bellied husband.

"Hurry up Narsimha, I have to take that flight to Dubai today. I want to reach the airport and take the first flight out of here. I don't want to wait in line and then travel standing." Eddie uncle was furious at his long time friend and driver Narsimha.

Narsimha was a veteran in his field and there were days he had travelled to the airport at least 8 times in a day. The freeway from Kundapur to Mangalore was 8 lane and took Narsimha only 45 minutes to cover the distance of 90 odd kilometers.

"Don't worry Vodyere. I will not let you take any dirty stupid local plane. Sit back and relax," Narsimha tried to calm his passenger.

"You know nowadays number of people travelling abroad has increased many fold. There are at least 300 flights everyday which leave the Mangalore airport." Eddie uncle gave some trivia to Narsimha.

Within 40 minutes Narsimha screeched in front of the Departures gate in the old crumbling building named "Mangalore International Airport." Eddie uncle swiped his card on the cars door and made the payment.

"This terminal badly needs some paint," Eddie uncle was murmuring as he alit the taxi and dashed towards the entrance. There were two policemen with lathis whisking passengers into the terminal.
As usual Eddie uncle was trying to make small talk with the serious looking policemen.

"You know, earlier there used to be policemen with guns at the entrance."

"We know sir. We would rather use the lathis to hit you than the butt of the rifle. My colleagues say that they weren't trained to fire the rifles anyways. Instead of using a rifle as a lathi, we prefer using a lathi as a lathi." One of the policemen laughed sarcastically.

The cacophony inside the terminal was reducing his alertness. "Mumbai express, Bengaluru Bullet, London superexpress, New York-Frankfurt express. Attendants dressed in bright uniforms were trying to woo in passengers to their respective aircrafts.

Eddie uncle, who by now, knew where he had to board his flight made a dash to the gate number 47. As he neared the gate the familiar sound of the attendant shouting "Dubai Dubai-Direct flight" greeted him and he ran up to him.

"Are there seats?" he enquired.

"Yes sir. Hop in. We were almost leaving. You are lucky." He quickly tapped on his phone and printed a receipt and handed over to Eddie uncle.

"Run and put your handkerchief on the seat. Otherwise you may not get what you want. Hurry up". The conductor advised Eddie uncle.

"Damn. Should I have tried the other plane," a thought ran up Eddie uncles mind. Anyway he entered and sat next to the lady.

"Chikku, Apple, Kulfi, Ice candy, Ice candy." There were vendors all around, inside the plane, trying to sell their chores. A couple of eunuchs too had made it into the aircraft clapping thunderously, putting most of the gentlemen into fake sleeps. 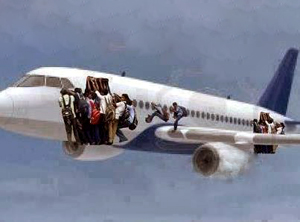 Just then, the captain-driver's voice boomed from the tiny speakers on top of the seat. "Good afternoon ladies and gentlemen. Thank you for choosing our flight. I am Captain Sarabello Dukris from Greece. To serve you better today we have with us 2 flight attendants Nithraan Singh and Mala Parvana. We are delighted to have you all board. Now before we take off, I request all vendors, please get out. We are ready for takeoff. Attention all crew- Please kick them off and don't bother about the passengers - they aren't our guests.." The last two lines weren't supposed to be heard by the passengers. There were a couple of customers in between transactions who had to give their change away as tips and were furious.

"Hey you. Sit down." The beautiful flight attendant, Mala Parvana nervously yelled at the passenger from the comforts of her seat in the alleyway.

"Right poi," another familiar sound. The aircraft was now taxing on the runway. From the corner of his eye, Eddie uncle could see one more jet ready for take off.

"Oh my God. Not another race to Dubai. I don't want to die today." His prayers were not answered as he could see the blue and yellow name plate clearly "Dubai -Sharjah Super Express."

The flights took off almost simultaneously. The craft carrying Eddie uncle almost reached cruising altitude, when there was a deafening sound from outside. Eddie uncle looked out through the window and the scene frightened him out of his wits.

"Give me way, you moron. Can't you see, I am in a hurry. I am not a government carrier like you. Get out of my way." The captain of the blue and yellow carrier was furious.

"Make your own way, you dumb-wit. I am in no hurry." Eddie uncle's captain was a typical government employee, with an attitude built in and nurtured through years of irresponsibility.

"Your landing charges are paid by poor tax payers money. No wonder you are in no hurry. Get out of my way now. I have taken money from my passengers and they expect good service" the yellow blue captain was yelling on top of his voice.

The chit chat went on for a while, with topics covering delayed flight, no communication to the passengers, bad food, bad seats, rude attendants and many more. Finally the blue and yellow jet roared past Eddie uncle's plane in the same air corridor.

The flight attendants, dressed in bright red sarees and the stewards dressed in beige colored trousers and creamish shirts came out to serve dinner. Dinner was good, but the attitude of the attendants was pathetic. When Eddie uncle asked for more rice, the steward sternly replied " Sir, you have only paid for half bowl but we are still giving you one full bowl. Be happy."

"Chandranna's waiters are much caring and loving." Eddie uncle remembered his beloved Chandranna and his small shack.

Eddie uncle just kept quiet at this insult as he was in the mercy of these morons. "Let me land once and I will never take this stupid greedy flight ever in my life."

After eating the three and half bites served to him, Eddie uncle dozed off to sleep and just woke up as the captain was announcing the landing formalities. As the flight was descending Eddie uncles co passengers were already standing and trying to take out their overhead cabin bags.

Just then a flight attendant requested one of them "Sir, third one from left. Please give it to me."
Eddie uncle who was by now sweating asked her "Ma'am the flight is landing and it is not advisable to stand, let alone roam around and take the luggage. Tell them something."

"Arre uncle, these people neither listen nor understand anything. It is like pouring water on a rock. Tell me which is your bag. I'll ask one of them to give it to you." She smiled and went away.

From the corner of his eye, Eddie uncle saw Anil standing at the head of the long line with his shoulder bag tightly clung to his body ready to jump of the flight as soon as it landed.

Anil turned back and was visibly unhappy to see Eddie uncle for being caught red handed.

A quick thinker, Anil quickly yelled "Uncle, come quickly, or else the line at the Passport control will be a km long."

Eddie uncle didn't think twice and wriggled past a few wide eyed people and joined Anil. As soon as the aircraft screeched to halt both Anil and Eddie uncle jumped out of the aircraft.

"Thud!" There was a sound from the bedroom.

"I think your uncle just fell off the bed again. I have told him a thousand times not to sleep in the afternoon. That lazy bum....." Cecilia aunty was talking to Anil who had come to visit his favorite Eddie uncle.

Eddie uncle who was suddenly shoved from fantasy to reality was still recovering from what he had dreamt about. He freshened up and greeted Anil, who was busy chatting with Cecilia aunty.

"Anil, you were in my dream, you know. I must say, India with this kind of population explosion, coupled with shoddy infrastructure and medieval mentality will have tough problems in future"

Eddie uncle explained to him in detail the whole episode of his futuristic travel from Kundapur to Dubai over a cup of tea, lovingly served by aunty.

Amused by the story, Anil too explained to him, his recent journey in the same government carrier which had haunted Eddie uncle in his daytime nightmare.

"God help us," Eddie uncle stared at the ceiling.

"Oh shut up. What can I do ? I am in my ripe old age with one foot in the coffin. Why should I even bother about it." Eddie uncle dismissed the issue with a wave of his hand.

"Selfish people like you who visit India once a year and blame the system for all the mess has also increased," Eddie uncle retorted sharply.

"Chal forget uncle. Let us talk something else. What are you doing tonight ? I have got this amazing red wine from France. Come home for a drink."

Eddie uncle accepted the impromptu invitation with his customary style, "Wine - that is for you. Your cellar would have scotch too, right? Ask your wife to make that amazing chicken 65. I will be there by 7."