A Goan writer-friend of mine, based in Mumbai, author of dozens of books, mostly on esoteric subjects, has been bombarding me with forwards on near-death experiences (NDE). After paying initial attention to the forwards, I have been instantly pressing the delete button. For the uninitiated, NDE is a personal experience with impending death, encompassing multiple sensations, including detachment from body, feeling of levitation, total serenity, the experience of absolute dissolution and presence of a light. There are books and articles on the subject galore. It hardly touches one unlike it did to me on a recent Friday. But, I must start at the beginning with a reference to drugs and alcohol to put the subject in context.

To start with, it is necessary to understand the components involved in the title – drugs and alcohol. Drugs come in many classes; but mainly recreational drugs and pharmaceutical drugs – pharma drugs, for short. In the latter case, it is chemical substances used in treatment, cure, prevention or diagnosis of diseases or used otherwise to enhance the physical or mental well-being.

Psychoactive drugs are chemical substances that effect the fluctuation of the nervous system, mood or consciousness. These include alcohol, nicotine and caffeine and are widely consumed worldwide. Alcohol contains substantial amount of psychoactive drug ethanol. It has potential for abuse and physical dependence. However, it has acquired social acceptance as reflected in the fact that the global turnover of alcohol industry exceeded $ one trillion in 2014.

Recreational drugs also include substances such as opiates and amphetamines. These are considered illegal for recreational purposes and there are international treaties such as Convention on Narcotic Drugs for the purpose of prohibiting certain substances. These drugs also can cause addiction and habituation.

The heading of this article may make one to jump to the conclusion that the combination of the last class of drugs (narcotics) and alcohol could be a deadly combo taking one to hell’s doors. This is true and deaths by such combos are part of crime statistics and not much mourned as they are conscious, voluntary and near-suicidal acts. But, what is potentially deadly could be a combo of pharma drugs and alcohol and I should know this because I had a near-death experience of this recently. 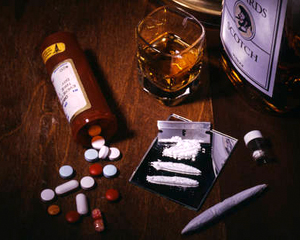 Returning from a fortnight-long foray into highly polluted cities with temperatures crossing 40 degrees C, I suffered from a painfully wracking, persistent cold and cough with profuse nasal and bronchial output as if a factory was in active motion inside my body. The family doctor, after initial pathological investigations and treatment, put me on to a specialist lung consultant. A battery of radiological tests (Echo-cardiogram and MRI) followed along with a plethora of pills and potions as also injections. Finally, for a “scopy” I had to be admitted to the hospital – for preparation, actual procedure and follow-up observation. “No compromise”, said the doctor in support of the need for hospitalisation. All the while I was there for three days, the nurses, doctors and para-medics kept visiting me from 5 AM to 10 PM – with tablets and capsules, syrups, taking temperature, BP and blood-sugar counts.
To reduce the pain of repeated poking for injections, they made a stent which provided a ready-made access hole to pump in medicines into the blood veins. Happily for me all the medical and para-medical personnel attending on me had a ready smile and highly professional approach.

Now enters alcohol. Or, more correctly, now exits alcohol – my daily sun-downer crutch of many decades vintage. It was taboo in hospital even without saying – though it was written in bold in their do’s and don’ts dictats. On discharge from the hospital, I drove back home and before lunch wanted desperately to celebrate my release from the deprivation from alcohol for three days. The Lady of the Home (LOH), who normally flutters at the mention or sight of alcohol, to my surprise and relief, demurred and left me alone with the bottle in my computer-cum-bar room.
Now comes in the nemesis. Lunch over, I went to have my daily afternoon siesta. Then the bell rang. I am always the door-opening man. So, I groggily started for the door. But my legs wobbled. Realising my shaky condition, LOA rushed to open the door for a closely-related couple.

Meanwhile, I dragged myself to the bathroom and there, in the mirror, I saw a ghost of myself. My face looked swollen, elsewhere my skin looked wrinkled, legs wobbled and a sensation of numbness enveloped all over the body. I recalled people saying that the first reaction to extreme fear and anxiety is involuntary urination. To obviate that, I consciously went to the potty. But, the main actor had gone into hiding – like the frightened tortoise withdrawing its head and neck into its hard shell. Ignoring this frustration, with a numb mind, I moved to my usual sofa-chair in the drawing room like a zombie – as if in a trance.

The LOH called the family doctor with unconcealed alarm. Knowing my aversion and phobia for medicine and doctors, he sensed the urgency and drove to the house within five minutes and took charge of the situation, checking the pulse and BP. All this time, there was a distinct non-awareness of the people around me. The aforesaid visiting close relative vigorously massaged my legs and kneaded my toes and kept repeating to me the consolatory and encouraging lines which I had been throwing at her from Milton’s Paradise Lost where Satan says:

What though the field is lost?
All is not lost, the unconquerable will,
...
The courage never to submit or yield
...
The mind in its own place, and in itself
Can make a heaven of hell, a hell of heaven.

That rang a bell! Then I saw the light at the end of the tunnel. Determined to get out of the lost consciousness of my surroundings, I started walking around the house and gradually exited from the near-death experience and could silently say with Shakespeare: All is well that end well.

So, sanity was restored without medical intervention. But, credit is due to LOH, a bundle of devotions, who had by this time quietly implored the intervention of God and his saints with prayers and vows. No wonder Tennyson says:

More things are wrought by prayer
Than this world dreams of.

Then I decided that if there is a lesson in this for me, I should share it with others. In the hospital I was joking with a visitor that the number of tablets, capsules and injections loaded into my body would be fighting among themselves claiming the superiority of their efficacy and cancel each other out – the whole lot of them. Actually what they did was to build up a chemically explosive environment. And alcohol happened to be the trigger.

The deadly potential of alcohol and pharma drugs is not my original discovery. Many branded medicines come with details of their constituents and warnings about their contra-indications. Even while I was in the hospital, the medical staff repeatedly asked me if I was allergic for any medicines – say sulpha. In one case, before giving me an injection, a nurse gave me a test doze, marking the prick-spot with a circle in ink and later checking if there was any swelling around the spot, before giving the full injection. When the medicines were in glass containers, one could see a printed leaflet with lots of data, including about contra-indications and how to counter them. (Of course you need highly efficient magnifying glass to read those tiny types). Now most of the tablets are shrink-wrapped in shining white aluminium foil and even magnifying glasses cannot help to decipher the contents.

“Media vita in morte summus” is the title and first line of a Latin antiphon meaning “In the midst of life we are in death”. It is simply an acknowledgement of our mortality. It implies enjoy life but don’t get infatuated with its pleasures. Also that death is just a heartbeat away. A drunk driver, a live electric cable, a heart attack or a fatal stroke can come out of nowhere. We are not safe on any day or in any absolute sense. But, there are situations within our control and an informed choice can and has to be made – as avoiding deadly combo of drugs and alcohol.

By Tacitus
To submit your article / poem / short story to Daijiworld, please email it to news@daijiworld.com mentioning 'Article/poem submission for daijiworld' in the subject line. Please note the following: