Tribute: End of the Rope...Never the End of Hope

"No, sorry! She cannot gain admission in our school. She needs to be sent to attend a special school!!!”

These were the words of the Principal in Divine Child High School, Andheri when the young and eager parents of a five year old sought KG admission. “Just give us one week and we shall bring her back and you will not deny her admission in the school.” This was their subtle reply. This is exactly what they did and the five-year old Anitha Pinto went on to study in the same school, one of the renowned schools in town. Not only did this very tiny, puny little frail child jump the hurdle of passing each year with impressive results, she also excelled & scaled new heights in academics and went on to win the excellence certificate from the hands of the very principal who had denied her admission. Remind her of the rendezvous she had a couple of years ago with the same child and she stands spell bound! 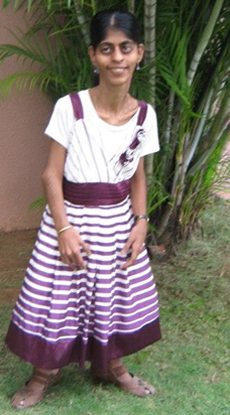 In the wee hours of the 2nd day of November, 1979, our noble earth just got richer….because, in a humble middle-class Mangalorean Catholic family in Andheri, God sent a sweet first born girl child to Henry and Winnie Pinto. As much as they rejoiced at the bounteous gift of a sweet baby girl, doctors mellowed their new- found happiness by informing that their bundle of joy was born with a rare bone deformity & will remain physically challenged and might even not see many moons! Initially, though the news distressed the Pintos, but, it served no deterrent for the God-fearing parents. Both the parents were adamant and never gave up. They raised the child like any other but with incessant extra efforts and she survived 34 and half long years making the doctors eat their own words!

From infancy to adulthood, under the caring and watchful eyes of her parents and her two younger sisters, Anitha braved every challenge which came her way. Battling with minor to major health problems from birth, Anitha was on and off on medications. Irrespective of this constant challenge, any scholastic activity was accepted by Anitha with a welcoming grace and excitement not seen normally in any other kid of her age.

Be it rendering a helping hand at home, participating in society welfare functions, church & parish activities, studying to be a graduate (B.A.) and even taking up a career in a multi-national bank, her exuberance was unmatched. She took immense joy in manifesting her capabilities wherever she could. One thing was certain, whatever she took up she won’t put it down until well-done. Take for example the decision of enrolling to be an active animator in the community church groups. This involved regular family visits, even climbing three floors to distribute Church tidings and attending prayer meetings and conducting and organizing zonal activities. She did it all with an endless flame of fervour and desire burning inside her.

She always wanted to be perfect in the things that she did. May be because somewhere she wished to fill the gap! Be it maintaining documents and albums, slam books from 2000s or being organised and neat, her work would be impeccable and clean!

An important & affectionate characteristic which warrants a mention is her remarkable memory and her profound affection to friends, family and acquaintances. This, she exhibited in a very special & unique way. Anyone and Everyone who knew Anitha do not remember any special occasion of their lives, be it a birthday, wedding anniversary, or any important event of their lives, without a personal wish from Anitha on that very day, without fail and every year. She in fact has maintained a diary with each one’s special occasions with days and years mentioned! She loved to light someone’s day with a pleasing wish and making sure to tell the person that their big day is not forgotten.

The worldly allurements never really fascinated her; she was a hallmark of simplicity & contentment bearing a cherubic smile on her face, even in the event of any hardship.

Just like a tiny mustard seed which grows rapidly like a cedar tree, Anitha’s self-confidence and courage helped her in combating & converting formidable odds with ease, though she had her share of disappointments & failures, like any other girl of her age.

A silent uncomplaining girl, only Anitha and her close family knew the pain and suffering she underwent, but never a whimper or a groan. Being it the umpteen number of tablets and syrups that she has downed, to the diseases that she was a target of, to the ins & outs of hospitals in the last few months of her life, she endeavoured to step into the Lord’s yoke at every instance. God gave her a special life & shaped her life to be a vivid example for all of us to emulate.

Two simply inspiring qualities of Anitha were unarguably her unfailing Courage and forbearing Kindness towards all, so very unconditionally. Speaking of her courage, there is something very touching about her. All the odds seemed against her, but her decided will which was behind her on every move didn’t led trials ever shake her. The strength of her quality was by far ahead of her quantitive physical weakness. Though, on numerous instances, her health failed her, helplessness never writ on her face or expressions. Rashid Hospital in Dubai threw their hands up in the air on the cold night of 19th of Jan, 2014 but her will power kept her going. She most certainly wanted to be back in India and spend her last days in her country and no one was going to take that away from her. For the records, in the history of Rashid Hospital, one of the renowned hospitals in the UAE, no patient had as many visitors as Anitha had in her two months stay in the hospital. The doctors and nurses were apparently also astonished by her strong will power captured by a weak body. She simply didn’t LET GO!

I know now that we never get over great losses; we absorb them and they carve us into different, often kinder, creatures.

Trials that Anitha and her parents, younger sisters, brother in law and niece have encountered have been used by God to mould their characters and the persons they are today. Such can be our own experiences too, if we place ourselves in the hands of the One who gives courage in times of discouragement and disdain.

Slow to anger, she often helped us examine our own hearts. In the hospital bed, in her helpless condition, she said a million unspoken words rendering pearls of wisdom & awesome inspiration. Her birth and life were indeed a precious & priceless gift to her family. Anitha, a true champion!

Great was her zeal for life, harnessed by a passionate fervour to animate & transcend to those who came in touch with her. To us, she reigns supreme in our hearts & minds as an epitome of simple living yet surpassing values.

Rich and flowing tributes poured out in Anitha’s honour during her month’s mind mass from all kinds of people who had closely known her and otherwise. The most striking, reminiscent and applauding fact was that tributes came even from people who have never met her before, simply because she led a highly virtuous life and also hearing how everybody wanted to share his/her happy moments with Anitha.

We hope that through our small effort of this Memoir in Anitha’s fond remembrance, the world will continue to experience the beauty of her life. She continues to live, enthral and inspire all of us.

From up there in Heaven, may Anitha continue to inspire us, like she did, while on Earth, to turn tragedy into triumph, obstacles into opportunities, and worst times into best and problems into projects having everlasting value, all through the faith in our Lord.

Darling Anitha, God saw you getting tired, when a cure was not to be. He wrapped his arms around you and said – COME TO ME. You didn’t deserve what you went through so he gave you the needed rest.

God’s garden must be beautiful as he only takes the BEST!

Anitha, We love you!

Tribute by Anna Fernandes
(A dear friend of Anitha)

By Anna Fernandes
To submit your article / poem / short story to Daijiworld, please email it to news@daijiworld.com mentioning 'Article/poem submission for daijiworld' in the subject line. Please note the following:

Title: Tribute: End of the Rope...Never the End of Hope