Journey of a Jackfruit

All eyes were set on a huge jackfruit besides the luggage in the trolley I was pushing around in the lounge near the immigration counter in Mangalore International Airport. As I was talking to the airport staff assisting me with my luggage, a sense of frustration, urgency and desperation was conspicuous on my face. As a few of the airport staff grinned looking at the mammoth fruit carried around without a packaging, my assistants were all busy finding ways to help me reach Bahrain without leaving the jackfruit behind!

The background: The maximum weight allowed to an international passenger with Air India Express is 20 kg of luggage and 7 kg of handbag. Although my hand bag did not weigh much, the weight of my luggage that included a huge bag and a carton, crossed 24 kg. The assistant suggested that I transfer the clothes from the cargo bag to my hand bag. But I did not see that a viable option as the weight of the clothes was not much. The assistant came up with another seemingly brilliant idea that I use the cargo bag itself as handbag as my handbag could be possibly considered as laptop case. The idea was soon found to be flawed as the size of the cargo bag was found to be huge and it would not fit into the cabin of the flight. Even as we were trying out different possible options, the time was running out. 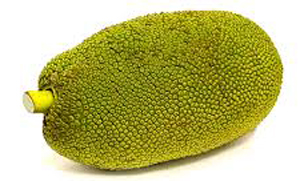 By now the sight of jackfruit had caught the attention of not only co-passengers, but also other luggage assistants who came up with the ideas to help me out. The fruit had slightly ripened and my mother-in-law, out of affection, had forcefully stuffed it inside the cartoon. I was torn into two minds and overwhelmed by Hamlet’s oscillation of ‘To be or Not to be’.

Amidst this, a lady standing in the queue for luggage clearance smiled at me casting her gaze at the fruit. ‘If you want, you can take it’, I suggested. ‘I would have taken it, had you told me a while ago. Now I have already added a friend’s luggage’.

Amidst this chat, came a quick suggestion from my assistant who said ‘why don’t you carry the jackfruit itself in your hand luggage?’ ‘Wow what an idea!’, I thought. Even before my assistant could get me a plastic bag to wrap the fruit, the lady to whom I had spoken to offered me one. Soon I rushed to the immigration counter to ensure that I was allowed to carry it in my hand bag. ‘I have a fruit in my hand bag. Am I permitted to carry it?’, I asked them. ‘I know it is a jackfruit! and you may go ahead by all means’, the immigration officer replied.

I heaved a sigh of relief! ‘Let’s eat the fruit in the plane’, the lady who offered me the bag, cut the joke.

As the jackfruit reached Bahrain airport after nearly 8 hours of journey via Kuwait, it had almost well ripened. As I shared the fruit with my friends and relatives, I felt it was worth the pain and fun!

(It’s a narrative of a hilarious incident intended to evoke a hearty laughter.)

By Anthony D'Souza, Madanthyar / Bahrain
To submit your article / poem / short story to Daijiworld, please email it to news@daijiworld.com mentioning 'Article/poem submission for daijiworld' in the subject line. Please note the following:

Title: Journey of a Jackfruit