With greenery shining all around the place, Kammaje, a small village near Kinnigoli town, couldn’t have looked prettier. Jackfruit and banyan trees on either side of the road increased the beauty of the place. Some of the people here were agriculturists with vegetables growing in their backyard, while another few had jasmine flowers, a few more were beedi workers and the remaining were in the Gulf, pouring their sweat to make their dear one’s life a happy one back in Kammaje.

Among these people lived an old man called Bommayya. With dirty stinking clothes that were white eons ago, torn Luna slippers and small star shaped silver earrings. Earrings were worn by men back then, not for fashion, but as a religious custom. Even though he was around 70 with gray hair, worn out body, and knee pain, it didn’t stop him from earning his daily bread. In that whole of Kammaje and Kinnigoli there was only one Cowboy and he was Bommayya. Unlike the imaginary fancy cowboy on horseback with boots Bommayya was a real cowboy on his feet and slippers.

Dark clouds dominating the sky, it looked like it would rain any minute and the showers would pour from up above. While people were all busy collecting logs of wood, dry coconut leaves outside their house to save it from rain, Bommayya was calling names out loud without worrying about the rain. Inka, Bannu, Inna…. When he didn’t get any response he increased his speed, cursing the cause of his worries. The eye blinding lightning, the roaring thunder was unable to shake his gut. It was his love for his cows that made him walk faster in spite of his paining knee.

“Enchina saav maryere!”making me search for them in this bad weather. Let me get my hands on them and I'll show them what I’ll do - saying this he continued to walk. Birds were flying back to their nests, somewhere in the background frogs were crying to indicate that the most awaited rain is on its way to shower on the dried lands. Bommayya stood for a while under the big mango tree near Jilly Bai’s house and then his eyes danced listening to the familiar Moo of his cows. When he saw them tied he said “so again, you ladies went to her farm!! Again, my ears will bleed listening to her complaints, and then I have to compensate by giving her free manure. He walked towards his cows and patted their back with love and said “why don't you listen to me? Huh?”

“How many times have I told you Bommayya to keep them out of my farm?” Jilly Bai's loud firm voice startled him. Old broken specs perched on her nose, wrinkled up face, gray hair and bent back, Bommayya wondered why she still worked on the farm. Her sons were well settled in Bombay, wonder why she’s dying here alone on this farm, Bommayya thought. Politely he folded his arms as if asking her forgiveness and said “Sorry Jilly Bai, I know this is not the first time, I don’t know why they always come to your farm. Next month you will get the manure." On hearing this, her face lit like 100W bulb. It was like patient’s craving matched with a doctor’s prescription. Jilly Bai wiped her hands with her sari and said, "If you insist, then who I am to say no. Anyway take the cows and go, it's going to pour soon." Saying 'thank you' to Jilly bai he untied the cows and started walking them home.

Bommayya’s father Tukra had been into toddy business and mother Nursy had been a housewife, being the only kid Bommayya enjoyed his early childhood. But when his father fell from a palm tree and died, Bommayya realized his life was not going to be easy. He, along with his mother moved to his paternal uncle’s house in Kateel. With his mother into jaggery business he went to school only till class 3. He never felt that education would help him earn money and that’s why he quit school and joined his mother in the jaggery business.

Bommayya was in his late twenties when he met Devaki, a widow. He didn't know if it was her loneliness or his loneliness that made him fall in love with her. He started to visit her daily in the night. Sometimes Bommayya would tell her his worries, troubles and Devaki would listen to him with all ears. He never gave a name to his relationship with Devaki because he never felt the need; he never cared about the society which he lived in.

When his mother questioned him about his relationship with Devaki, he lost his calm and fought with her. When he realized he could never make her mother understand his relationship with Devaki, he left his mother for good and started to live in a small house near Kammaje. He bought some cows with the little money he had and started to earn from their manure and milk. With time he learnt everything about cows, their diseases, cures, mating time, breeding, milking, etc. As he didn’t own any land he would take his cows to the forest owned by government to graze early in the morning, sit with them for a while, talk to them, and tell them his sorrows, his only listeners who never complained. Later he would untie them in the forest to enjoy a little bit of freedom and come home. 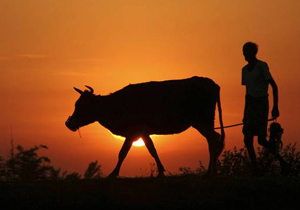 Most of the time the cows would wander in the jungle and then come back home in the evening whenever Nishmitha bus passed through the main road. That’s the unique routine the cows followed. Whenever they failed to return to home on time Bommayya would walk and search for his cows until he found them. Many a time he had walked till Kinnigoli searching for his cows inquiring passersby along the way.

Men can suppress their need for marriage and craving for kids, but women can't. Devaki started pressuring Bommayya to get married and start a family, but Bommayya became mute to Devaki's pleas. When he couldn’t take anymore of Devaki’s nagging he started to drink liquor. He would drink daily and come home and pick up a fight with Devaki. When Devaki couldn’t take his tortures she left him never to come back again. A depressed Bommayya vowed to never fall in love again. With the cows by his side, Bommayya never felt alone.

When his mother passed away, he mourned for days. He had never felt so lonely and abandoned his entire life.

One fine morning Bommayya was taking his cows to graze in the forest. While crossing the road one of the cows started running on seeing a vehicle. Bommayya tried to catch the cow but he couldn’t as it increased its speed. He lost his balance and fell on the ground. Bommayya was hurt badly, with bruises all over the body, bleeding head, and with great difficulty he reached home and held a cloth to his bleeding wounds. As he was scared that if he went to the hospital, they would admit him and there would be no one to look after his cows, he stayed at home bearing all the pain without complaining. Sympathising with his condition, a Good Samaritan in his neighbourhood bought him food and fed his cows.

As the days passed, when it became impossible for him to move, he cried in his bed thinking about his cows. His neighbors forcibly took him to the Mangalore’s government hospital and admitted him in. His hands and legs were plastered and he begged the nurses to let him go as there was no one to take care of his cows.

After two weeks the doctor let him go, telling him to look after himself. He was over the moon as he would be seeing his cows after a gap of two weeks. When he reached home he was devastated to see his empty cow shed. He called them by their names, he called louder, but no cow showed up. He waited till evening, but his wait turned unfruitful. It is then that his neighbors told him that a few of his cows were stolen and the remaining were sold by a rich man. He knocked on the man's door at midnight, cursed him, his ancestors, he cried and yelled. His misery was indescribable. The rich man gave Bommayya some money to shut his mouth and told him to get lost. With the little money in his pocket Bommayya looked at the sky and said, “You punish me, I don’t care, but why punish my cows?” He wiped his tears then and said, "I will get you all back."

Some of his neighbours who had bought cows from him took pity and returned the cows free of cost. Every single day Bommayya wondered about his missing cows and cried. He wondered whether they were fed properly in somebody's house, or slaughtered for meat.

It was the monsoon season; his old house couldn’t take the heavy weight of rain and collapsed. With mud walls leveled to the ground and roof gone, Bommayya made the nearby bus stop his home, with water pouring in from all sides. He never complained about anything, in fact, his cow by his aside he felt content and peaceful.

Old age was the only thing holding back Bommayya from doing his daily chores. His eyesight blurred and his joint pain increased, still he took the cows for grazing daily. When Bommayya’s old heart changed its beating pattern he wondered what would happen to his cows if he died. He was admitted to the same hospital again by his neighbors. The doctor never thought he would make it. With his senses gone, he talked about his cows with other patients over and over again. Sometimes he would call his cows' names loudly and say "come home, it's late, it's getting darker. The strangers will take you, come home, come to me."

In his absence, his cows were stolen again and dragged to the slaughter house. The cows cried, calling him in their own language while he called them, telling them to come to him and he would save them from all bad things. Even though he had lost all his senses, he knew his cows were in danger. One fine day, he closed his eyes and all images and memories of his cows floated by. He never opened his eyes again.

Ages have passed, time has rolled like a roller coaster ride, but there never has been a cowboy like Bommayya in Kammaje. After all these years, the bus stop bearing the sign of Bommayya’s existence and his cows still stands at the same place.

By Sylvia Navina Lobo
To submit your article / poem / short story to Daijiworld, please email it to news@daijiworld.com mentioning 'Article/poem submission for daijiworld' in the subject line. Please note the following: