Amedikallu: A Tough Trek that's Worth Every Drop of Sweat

I had become rustic after almost 4 months of non-trekking activity from November onwards due to my busy schedule. So I was waiting excitedly for the next one and at the same time hoping the schedule does not coincide with my son’s exams. I was fortunate that the exams got over on 27th of Feb and our two day trek to “Amedikallu”, considered being one of the toughest treks even to professional trekkers, was scheduled for 28th afternoon. As the exams got over I could even rope in my younger son and two of his friends to this adventure and I am happy they could make it.

Amedikallu located in Shishila a few kms from Kokkada located at a height of about 1300 meters is an important peak of the Charmadi belt. With its shola forest and thick grassland it has been a delight and challenge for trekkers. It is considered to be one of the challenging yet spectacular treks as it tests the endurance and energy levels of trekkers. The steepness of the terrain, lack of water sources and the harsh son is what adds to the challenge. The peak has a huge rocks one of which resembles a giant turtle and hence the name ‘Ame’. There are three stones appear like the good old ‘dikkel’ traditional stone based fireplace used for cooking in villages. It is believed that Sita used the Ame as her abode and dikkel was used to cook food. 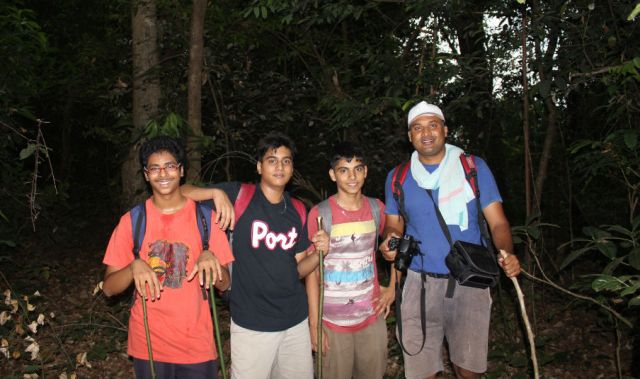 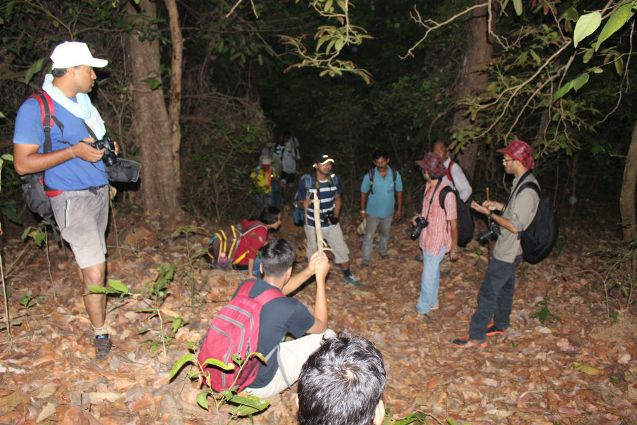 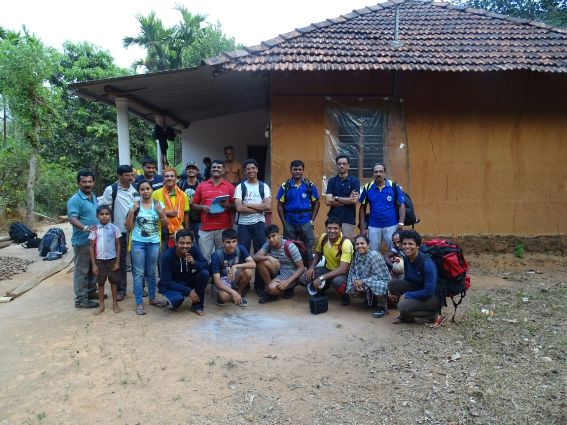 Though I said it was a two day trek the actual trekking was only for a day. But we had to reach Shishila the previous evening to begin our journey early morning. We a group of 13 including 3 ladies started off from KSRTC Bus Stand to Shishila at 2.45 pm. The bus halted in Uppinangadi for an hour and we reached Shishila at around 6.00pm. Our guide Chennappa who was waiting for us there joined us and we boarded another bus that goes to Hole Gundy, to the residence of our guide Chennappa. It was almost 7.00pm when we reached there and 7 more people joined us as they came by car carrying food and other items.

The place was perfect for us as it is surrounded with greenery in all sides. On freshening up there was introduction and then we realised the group had more freshers than regulars. Members were given guidelines for the next day’s trek. The mood was already for singing and we formed two groups to play Antyakshari and then we had our dinner –kottige with kurma and ghee rice. Just when we were watching the night sky and the serenity of the surrounding with no vehicles or noise we were invited to join the campfire.

Knowing full well that we had to start our day at 5 am and be ready to the tough trek we decided to hit the sack. Even the ladies slept in the open courtyard and went to sleep seeing the night sky. Just as we were about to sleep one of the trekkers began to snore (regular trekkers were aware of it) and that elicited amusing comments from all.

Early morning even before our alarms rang we were woken up with the rooster crowing exactly at 4 am, an hour before schedule. We had our breakfast packed our lunch (chapathis, rice, oranges, bananas and water) and by 6.00 am we were ready for the challenging task ahead. Our entry into the forest began just 100 meters from Chennappa’s house. We were warned that the 16 km to and fro trek is almost 60 to 70 degree gradient and in no time we knew what was ahead of us. Our entry into the forest was greeted by the cry of wild chicken and chirping of birds and there was also the sound of the flowing stream.

We rested for brief periods and continued our journey and after traversing for nearly two hours we were out of the cosy canopy of the shola forest and into the open grassland. The sun began to show its true colour but the cool breeze nullified the heat. By now we could get a clear view of Amedikallu and the adjoining rocks during our trail. We could also cite the mist covered Ettina Bhuja to our right at a distance. In between we rested under the canopy of a huge black rock and Chennapa told us some trekkers use it during their overnight halt or when it rains. We began to climb steep grassland enjoying the beauty of the greenery enveloping us from all four sides. We could see some of the other peaks including Shingani Betta, another challenging trekking destination.

The tough trek showed its impact as some trekkers began to get cramps. Harsha Samrajya, President of Mangalore unit of YHAI, an experienced trekker had anticipated it and was carrying salt with him. That came in handy as consumption of salt is said to be the best way to get rid of cramps.

As we moved on we were drenched with sweat and had emptied almost half of the water we carried and we had to cover remaining half of the distance and come back. We used oranges to quench our thirst and tried to save the water for the more gruelling session ahead.
Though the trek was quite arduous the 360 degree scenic beauty enveloping us was the best gift for all the hard work. If the greenery far away peaks gave us an opportunity to feel nature in her pristine form the golden grass covered nearby peaks was a feast to the eyes. No camera can capture the exquisite beauty of nature in all her glory. It has to be captured only in the lens of our eyes though we did try to catch them in our cameras. By now some trekkers really began to feel tired but never gave up the challenge. As we cited the peak from close quarters we thought had made it to the destination. But we had to circumvent the huge 90 degree huge black beauty of a rock in order to reach the peak which needed another one and half hour trek in the forest. We took short breaks and moved on to reach near the peak at around 12. 10 pm, having trekked for five and half hours.

Here we decided to rest and began to have our lunch. We could see the peak Amedikallu very closely from this place we could not resist the temptation of climbing the peak though hungry and tired. We succumbed to the temptation and left our lunch half way through to reach the top. What waited at the top was nothing but the spectacular, breathtaking and stunning view of the Western Ghats in all its gorgeousness and magnificence. The resplendent beauty of the fusion of red-green foliage was a reward that I will cherish for the rest of my life.

The three rocks which formed ‘Amedikallu’ were in fact a little apart and from we almost went to the edge of this ‘Ame’ to capture the ‘Dikallu” and the beauty of nature almost 1300 meters down. Guide Chennappa kept cautioning us not to take risks. In the cool breeze and the panoramic beauty of the surrounding we forgot our hardships, the sweat, heat and aches for the next 20 minutes. We wished we could spend more time there but we had to return with a heavy heart having captured those beautiful scenes in our hearts and minds. The young boys also enjoyed their experience at the top of the peak. They never bothered to eat their lunch as they filled their bellies with biscuits, fruits , bananas and water.

By 1.15 pm we began our return journey in the same route. Though the sun was atop the cool breeze was the saviour. The guide told us that the day was cloudier and sun was less harsh. We later realised that it had rained in some parts of Dakshina Kannada on that day. We had to be very careful during the return journey as we had limited water with us. The boys who were under my supervision, had emptied their bottles and I had to ration the remaining one bottle of water I had carefully preserved. Fellow trekker Naveen spared half litre of water he had and that saved the day for the boys, who had not adhered to my advice to be judicious in consuming water.

The return journey was much harder on our knees and thighs as we had to be careful while climbing down. Add to that the energy level of some of the trekkers was at its lowest ebb. With water bottles empty trekkers began to feel as if the trail was never ending. Finally by 5.30pm all of us were back at Holegundi. A few trekkers were completely drained but had the satisfaction of completing the journey. The first thing we did was to quench our thirst and rest for few minutes. Smt Chennamma then served us tea and we felt rejuvenated. We had quick bath changed our clothes and were ready for the return journey. As there are no buses from Hole Gundi after 4.30pm two jeeps were arranged to drop us till Dharmasthala.

At Dharmasthala we had snacks and tea and boarded the 7.25 pm bus to Mangaluru. Almost everyone slept tired as we were only to wake up at 9.15 pm when the bus reached the city. The next day we could not even walk as our thighs and knees pained terribly because climbing down had put pressure on calf and thigh muscles. The second day was even worst as we could not walk, climb up or climb down stairs. But then we were handsomely compensated and I must say every drop of sweat was worth the effort.

Title: Amedikallu: A Tough Trek that's Worth Every Drop of Sweat