Every city in the world has its commercial street. It's an incentive for us to visit any city in the world. This street attracts many people who either buy from the finest brands in the world or like me take a stroll for a window shopping. The glowing lights and colors of these streets tantalize our consumerist veins. Every material we gaze shows us how important for us to have it. In other words without it we will be lost. Hence there is a longing to fulfill our desires to have one or the other.

There is a boom in the income of the people, that is because of the better job opportunities in the world. Wallets have swollen to the full; economy has surpassed it's bad times and has put money in people's pockets. In turn people empty the wallets in these huge commercial streets. Therefore there is a flow in the economy. It becomes a cycle of spending and receiving. As an economist I tend to incline my article towards economical issues of the people. But my aim is not to dwell too much on it for this is not an exhortation on the subject. I would like give food for thought; as I was strolling through Bangalore's biggest commercial street Mahatma Gandhi Road, my eyes went to an armless poor person in the corner of a big designer shop waiting for crumbs to fall from master's table. He was so poor that he didn't even have proper clothing in the chilly evening and the irony was that he was right in the corner of a designer clothing shop. He had a small mat on which spread a few coins. 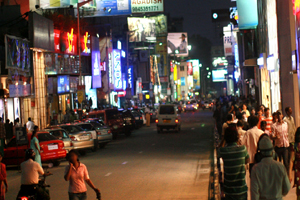 What drew my attention was that there were a few coins of British sterling. This is the scenario of an armless poor beggar. I wanted to get close to him and have a small chat about everything. So I gave him some money so that I could get close to him. He looked happy to talk to me for I was the only person who spoke to him among the millions people who walk this street. I was curious to know whether he knew the silver with brown coated coins. He said it's foreign money, well he knew that much. But he had no idea how much that two pounds was worth Indian rupees. It would be around one hundred and sixty rupees. Now that's a lot of money for the beggar. I was curious as to where and how he would exchange those foreign coins. He told me a place and said they give something and I take it. It's like something better than nothing.

Two things that engulfed my mind that day, first, every fat wallet people failed to see the people in need, who didn't even have a proper access to clothing. A country can be rich for some and poor for the others. A country can showcase itself as rich by showing the best stock exchange booming bars, that is the reality of India. It is a country growing in its leaps and bounds for the global economy. It is in the spotlight where every one has this illusion that India will be super rich nation in few years time. I think it's time to look inward to our people who live without the proper basic necessities of life. It's time to invest in our people rather than looking for some multinational companies who take out from the pot. Let's build our economy for ourselves and let us not build it to show to the world what a super power we are.

Secondly, the poor beggar was ignorant how much income he had, rather he was content with what he had. This is the reality that poor people are robbed of what they have. At the cost of the poor another builds their mansions and sky scrappers. Poor have to bear the brunt because they are honest and genuine people. They know not how to make money through crooked ways. That is why poor remain poor and rich become even more richer. This world is full of irony.

Can we break this irony and make it indiscriminatory reality? Can we come out of the illusion that we could be rich for the world whilst we have our backyard to be cleared first? I leave with these two questions.

By Jerri Melwin Dias
To submit your article / poem / short story to Daijiworld, please email it to news@daijiworld.com mentioning 'Article/poem submission for daijiworld' in the subject line. Please note the following: