India-Pak WC 2015: Most boring encounter ever!

Many Indian cricket fans do not yearn the World Cup title as much as they want their team to win against arch rivals Pakistan. There has been constant cross-border and geo-political antagonism between both countries as of late. However, an impartial analysis of both neighbours concludes that, one is moving towards progress and enlightenment and the other is falling into the abyss, socially, culturally and intellectually.

Cricket has been a remarkable unifier of both the countries, amidst geo-political tensions. In the past, these encounters have proved to be highly emotional, tensed and nerve racking not just in the cricket field but also in the streets. This time, to the contrary, the voltage has run low. As India and Pakistan get braced to face each other in yet another World Cup encounter, the expectations from both sub-continental powerhouses looks faint and the contest unexciting. Gone are the days, when crowds feared hostile Pakistan bowling line up that decimated the Indian team in most occasions. The colossal combination of Imran Khan, Wasim Akram, WaqarYounis, Aqib Javed, Shoib Akthar, Saqlain and Mustaq Ahmed have been distance history, and when one looks at the current Pakistan side, its sounds more or less like an ordinary domestic side. One Pakistani fan remarks on Twitter: "Last time we had this weak bowling line-up, was in 1946, when we were India."

Pakistan cricket saw steep decline in post 2000’s, as the side got ransacked by massive corruption, match fixing and the intrusion of Radical Islam into cricket. The country also went into a period of darkeness since then, rocked by terrorism, religious extremism, drug trafficking, crimes and corruption. While Combating evils at its homeland, made Pakistan focus less time on improving their cricket. 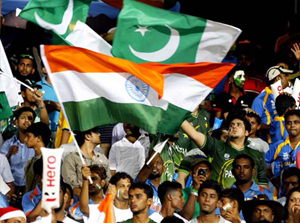 The story of India has been way different. It has beaten Pakistan on every occasion they faced in World Cups so far. With a hundred percent record, their tail is up. But, with a kind of form dhoni’s men are going through, it doesn’t look any good. Even if they managed to keep their cent percent record against Pakistan, the chances of them making it all the way, is doubtful.

India has arguably one of the weakest bowling ‘attacks’ in the world. It cannot be called even an attack, such is its grade. It is feeble and shaky, lends runs with generosity and makes the most vulnerable batsmen appear indomitable. Every other team has minimum of two world class bowlers, quite capable of creating an impact at the opposition. But, Dhoni is running out of options and at times get frustrated, the very decision of handing Stuart Binny the opening over itself vindicates that. Rest of the bowling line up making of Umesh Yadav, Mohd Shami, Bhuvanesh Kumar and Ashwin looks weary and mediocre. Perhaps, there is some hope in its batting that boast of Virat Kohli, Rahane, Rohit Sharma and the skipper Dhoni. But off late, Kohli’s form has dipped and has caused serious concerns in the teams think tank.

Not many names come to mind looking at Pakistan’s squad, it appears fresh but lacking in experience. Shahid Afridi, Younus Khan and skipper Misbah are the ones Pakistan would be banking on to deliver.

But one aspect to watch out for in an otherwise dull showdown is the attitude of the two captains. Mahendra Singh Dhoni and Misbah have gone through hard times in the past and had to endure certain degree of flak for their defensive approach. Dhoni has been dismal both as a batsman and keeper in the recent past, and appears dull and clueless, when pressure builds up. Misbah is a not a gifted cricketer, but makes the best out of his batting skills, it is his incredible temperament that may ultimately prove worthy in this battle. It is under Dhoni’s leadership, that Indian cricket achieved great landmarks in world cricket and under Misbah’s leadership Pakistan cricket has stretched away from controversies and has embraced a matured mindset.

There is a Star Sports commercial, which is making rounds in social circles creating an ice breaking build up to the fixture. The ad shows a die-hard Pakistani fan watching the India-Pakistan match in 1992, 1996, 1999, 2003 and 2011. The man buys fire crackers each time but cannot light them, since Pakistan gets defeated on every occasion. At the end, the disappointed man asks his little son ‘Kab Phodenge Yarr’? Could 2015 World Cup be the time for Pakistan to break the deadlock and celebrate or would it be yet another Indian jubilation? Let's wait and watch.