Though the Indian Constitution mandated a Uniform (Common) Civil Code under Directive Principles of State Policy, successive governments so far have given it a miss. Now it appears that the Supreme Court is nudging the government to legislate such a Code, as reflected in two cases handled by it on February 9, 2015. In one of these, a PIL, an Indian Christian was the petitioner while in the second the plaintiff was a Muslim. But, first the facts, stating with the case in which the judgment has been delivered.

According to a report in The Hindu by Krishnadas Rajagopal, titled “Right to religion not above public morality: SC”, published on February 10, confirming the sacking of a government servant for bigamy, the Supreme Court on Monday ruled that the fundamental right to religion did not include practices which ran counter to public order, health and morality. The judgment by a Bench of Justices T.S. Thakur and A.K. Goel was on a petition filed by Khursheed Ahmad Khan against the Uttar Pradesh government’s decision to remove him from service as Irrigation Supervisor for contracting a second marriage when his first marriage was still in existence. His ouster was based on Rule 29 (1) of the Uttar Pradesh Government Servant Conduct Rules, 1956. Mr. Khan challenged the constitutionality of the provision in the 1956 Rules, arguing that it violated his right to freely practice his religion.

But the Bench dismissed his contention. Justice Goel, who wrote the verdict, quoted the apex court’s 2003 judgment in Javed versus State of Haryana that “a practice did not acquire sanction of religion simply because it was permitted.” “What was protected under Article 25 was the religious faith and not a practice which may run counter to public order, health or morality. Polygamy was not integral part of religion and monogamy was a reform within the power of the State under Article 25,” Justice Goel wrote. The court further noted that no material was shown on record to prove that Mr. Khan had divorced his first wife, and moreover, his service record still showed his first wife’s name. 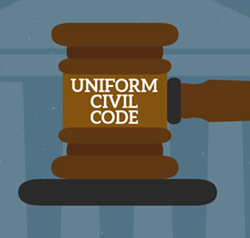 Hearing a plea seeking validity to a divorce granted by a Christian court set up under their personal law, the apex court bench favoured keeping religion out of the civil laws. “Every religion will then say that we will decide how to carry out personal laws,” the bench pointed out to senior advocate Soli J Sorabjee who appearing for a PIL petitioner, Clarence Pais, an advocate from Mangalore, urged the bench to consider this question of law and religious freedom, claiming it impacted over one crore Indian Christians governed by the Canon Law on marriage and its dissolution.

The court, however, referred to honour killing as an example of the perils that religious or self-styled socio-political institutions could spawn in case they had legal backing. “Look at the cases of honour killings. Then there is ostracisation of young boys and girls. You don't follow what they state as a law of the society and you get ostracised,” the bench said.

The PIL by 85-year-old (When filing the petition in 2013) lawyer Pais has sought a direction to all criminal courts in the country to recognise a decree of annulment of marriage granted by the “ecclesiastical courts/tribunals.” If the dissolution of marriage by such courts was not held to be legally valid, thousands of Catholic Christian men could face criminal charges of bigamy, the petition had contended. It will also make the children of second marriage illegitimate.

On Sorabjee's plea that if the court did not recognise marriage and its dissolution under the Canon Law, men will be exposed to the dangers of being prosecuted for bigamy, the bench said, “Of course, such cases can be filed.” “Ecclesiastical court is on one side and the civil law on the other and only the latter is recognised. Ecclesiastical court should only be for religious purposes,” the court said.

Additional Solicitor General Neeraj Kishan Kaul, appearing for the Centre, contended that the petition was not maintainable and the legal position was clear.

The court, however, granted four weeks time to the Centre to file its response to the PIL observing that the government may take help of directive principle of state policy, recommending uniform civil code to buttress its response. The bench also asked the petitioner to submit a rejoinder in two weeks thereafter and posted the matter for consideration on April 8.


The background to the writ petition by Clarence Pais is the following case:

Godwin D’Souza married Shanthi D’Souza (nee Lobo) at Holy Cross Church, Kulshekar. The marriage broke up shortly thereafter and the wife stayed away from the husband. Then, Shanthi filed an application registered as number 2/20 01 for Dissolution of Marriage in the Ecclesiastical Court of the Diocese of Mangalore and the marriage was held to be a nullity, and a Dissolution Decree, dated 10/12/2002, to that effect was passed. Hence, under Canon Law, Godwin became eligible to marry again. He married for a second time at Holy Cross Church and the priest who blessed the nuptials on both occasions was one and the same. Two children were born of the second marriage. Then, after the lapse of a decade, Shanthi filed application in the Magistrate’s Court to charge Godwin on the offence of bigamy. The ground was that the Church Dissolution made under Canon Law was not binding on the Criminal Court because Canon Law is not recognized by the State as the Personal Law of Catholics.

Incidentally, the necessity and rationale of the petition is summerised in the following excerpts from plaint of Clarence Pais in the Supreme Court.: This Writ Petition is filed in public interest for a declaration that the Canon Law is the Personal law of Indian Christians and that decree of dissolution of marriage granted by ecclesiastical court are valid and binding and challenges the jurisdiction of Criminal Courts in India… to prosecute Roman Catholic (Christians) under Section 494 of the Indian Penal Code for the alleged offence of Bigamy without consideration the application of the Personal Law which in the case Catholics is the Code of Canon Law.

… the matter or issue involved affects over one crore citizens of India who are Indian Christians/Catholics… The petitioner has a large family of five children and nine grandchildren. There is every possibility of any member of his family being prosecuted for Bigamy notwithstanding that the family member concerned may have obtained Decree of nullity of marriage from the Ecclesiastical Court constituted under Canon Law before marrying for a second time as per Canon Law.

It is interesting to note that this is the second PIL petition filed by Clarence Pais. In 1997 he filed a writ in the Supreme Court to exempt Christians from the requirement of obtaining a probate, involving money and time, under the Indian Succession Act. To protect the interests of the Indian Christians he filed a Writ in the case - reported in A.I.R. 2001, Supreme Court Page 1151- to declare that Section 213 of the Indian Succession Act as discriminatory in that it requires probate of only Christian Wills. Even though the Writ, which also involved Soli Sorabjee in the filing process, was dismissed, with his great persistence, with the help of then Defence Minister, George Fernandes, his childhood friend, and Mr. Arun Jaitley, then Law Minister in Vajpayee government, the relief was granted by Parliament under Act (Amendment) 26 of 2002.

Finally, though the present ruling combination at the Centre has the requisite majority in Parliament and is well disposed to pass a Common Civil Code, it is not a cake walk in terms of timeline. It is a time-consuming process to build up consensus and a possible reference to a parliamentary committee. Meanwhile those who remarried under Canon Law annulment could be targets of litigation for bigamy and their children would be deemed illegitimate for no fault of theirs. Therefore, pending the passing of legislation on Common Civil Code, an appropriate ordinance should be issued to protect the remarried and their children.

It is apt to conclude a heavy subject on a lighter note with Michel de Montaigne (1533-1592), French philosopher, on matrimony: “It happens as one sees in cages: the birds which are outside despair of ever getting in, and those within are equally desirous of getting out”.

Author and journalist, John B Monteiro has his latest book, Corruption – India’s Painful Crawl to Lokpal, published in USA. Priced at $21.5, it can be had from Amazon and other leading online distributors.