I am an Indian and I am proud to be one. My early childhood was spent in a middle class area in Bangalore. Being a Catholic I was sent to a Convent, my neighbours were all Hindus and we were the only Catholic family in the midst of Hindu homes. It was an advantage since we were invited and would enthusiastically participate during Diwali, Yugadi, Ayudh pooja, Holi, Krishna Janmashtami, Ramnavami. During Christmas my job was to distribute cake among all our neigbours. We were Indians first.

My immediate neighbor was a Telugu Naidu. Through him I got introduced to Ramayan, Mahabharat, tales of Dasahavathar. My heroes have always been Karna and Lord Krishna since then and even today. I have read many English versions of Mahabharat since then. I still keep a copy for myself including the Gita. Later as I grew up I became very interested in Swami Vivekanand and Sri Rama Krishna Paramahamsa and learnt that all religions are only different ways to achieve the final destination towards God. Today, my best friends, all these years since adolescent through my college, have been both Hindus one a Reddy and another an Iyer Brahmin. We had no sense of a feeling that we are from a different religion then and even today.

I have always maintained that Hinduism is a very flexible culture and can absorb and evolve further stronger. Many westerners from various religions have always been attracted towards this culture. Many have converted in Europe and US. But this trend will end soon, thanks to the so called the proponents of Hindutva, who are bent on making this great culture rigid and fascist in nature. This organization has finally tasted political power though they had tried during Shri Vajpayee's time, but could not proceed further as he was a true follower of the Raj Dharma. Today we see elements completely controlling the Government machinery be it to belittle Christmas day through a circular or prop up the so called “Fringe” elements to instill a sense of fear thrrough attacks on churches and then Ghar Wapsi campaign. They claim that they have no control over these elements. Please do not take all of us to be that naïve as it is all too obvious. 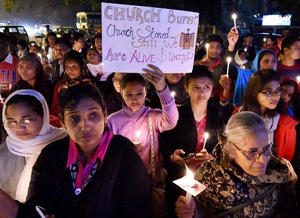 Hindu culture has survived the onslaught of Muslim rulers and the British or Christian rulers so you may call. The reason I reiterate is the flexible nature and greatness of this culture able to absorb the tenets of all religions into one. Why do these so called safeguards of this great culture want to create a fear psychosis about conversions? If still as the survey suggests 80% of the nation is Hindus then in that case the missionaries of other religions have done a dreadful job. Today the flexible and soft nature of Hinduism which has been showcased to the entire world by Mahatma Gandhi, Swami Prabhupada and later ISKCON, Swami Vivekananda, Sri Sri Sri Ravishankar is being subjected to attempted hijack by the so-called rigid and so called protectors of Hindu culture when in reality Hindu culture does not need such protection. Shame on such elements that use such saints to discredit and stem the growth of this great culture.

The ploy of accusing Christians that we are converting people does not hold any water. During my schooling in Convent and later higher studies and college in a Catholic run institution the majority of my classmates were Hindus, say 70 percent. And I vouch fore saying none of them have been induced to convert as claimed by attackers of the Catholic church who speak of using inducements to convert. This is a big lie theory propagated by the Nazis namely Josef Goebbels to commit atrocities against the Jews. I do not contest that there are elements within who claim to be the renewed Christians who are definitely doing this, for that matter they are also trying to convert Christians part of the organized church. The radical elements know this very well yet they pretend to be naïve. They very well know this but act as if they are ignorant. Ignorance is bliss my friends, but remember you are on the verge of dismembering this great nation and its tenets.

You cannot achieve your goals by desecrating the Holy Sacrament. Will you tolerate if someone does the same to the inner Sanctum of any Temple. I am also appalled by many of our Hindu brethren who should have provided a moral support to the miniscule minority today who runs educational institutions and hospitals for the benefit of many. But they are silent. I was one of those who vociferously supported Narendra Modi to be the PM. However his silence is haunting. It indicates unfortunately that there is a tacit understanding with some elements who I am afraid are controlling the functioning of the Government. The industrialists must remember that development and growth cannot be achieved when a part of the society feels insecured and targeted.

I am against conversions and vocally advocate action against such elements. My sister is married to a Hindu and I am comfortable with that. She is very happy. But the recent actions seem to make things obvious that we are Christians first and then Indians. This unfortunately has made many like me that I am a Christian first and made me a fundamental Christian. Thanks to all the radical elements and if further you go ahead with your agenda, you will make many more like me!

Disclaimer: All views and opinions expressed in the above article are those of the author alone.

By Arun A D'Souza, Doha
To submit your article / poem / short story to Daijiworld, please email it to news@daijiworld.com mentioning 'Article/poem submission for daijiworld' in the subject line. Please note the following: