Extolling the Virtues of Saree

With the concept of the big fat Indian wedding catching the fancy of the younger generation of girls - saree - the quintessential 6 yard, unstitched garment draped over a woman’s body, is once again making a comeback but in different avatars. Having withstood the test of time and the changes that swept across the country post globalisation, saree continues to capture the imagination of women of all ages and class.

For ages together Indian women have draped themselves in saree without actually realising that it enhanced their sensuality in a natural way. Be it a simple cotton saree, body clinging georgette or chiffon or an expensive and elegant silk saree with attractive golden/silver boarder, it never fails to exude the sensuousness in a woman. Woman in a saree has fuelled the poetic imagination of many a writer resulting in some memorable songs and poems immortalised in Bollywood movies. This piece is an ode to the saree and its grand comeback to its exalted position in Indian culture.

Saree is in fact the only garment that is considered a rare combination of sexy and elegant - all at once. It is true its use is limited to special occasions for convenience sake. However, when it comes to weddings or other formal functions saree is still the first choice of most women be it the rich, the poor or the burgeoning Indian middle class. Neeta Ambani of Reliance Group was in the news in February last year when she wore a saree costing Rs. 40 lakhs at the wedding of CEO of Reliance group Parimal Nathwani’s son’s wedding. It is not erroneous to say that it was her saree that attracted more eyeballs than Neeta herself. The elaborate and grandiloquent Indian weddings are incomplete without those intricate 6 yard weaves that come in different shapes, size, colours, textures and motifs befitting the occasion.

From casual clothing that formed only a drape with a plain blouse not long ago, saree has come a long way getting many facelifts in the process of its evolution from a simple regular household garment into a beautiful, fashionable, elegant and sexy ethnic wear. There was a time when salwars and jeans became a norm due to the easy go and time factor. The saree lost its sheen and wearing it on a regular basis was considered old-fashioned. Many women hesitated to drape in saree as they believe it makes them look older. But now once again the all time universal appeal of saree is conspicuous as young women, who for sometime showed their repugnance towards saree are embracing it and continue to weave their magic around.

It is well established that every woman wants to look beautiful, sexy, attractive and elegant at the same time - an effect plausible only in a saree. Only a saree can accentuate the contours of the female form in ways no salwars, shirts or dresses can. Saree covers most parts of the body but the most tempted ones will be like playing a hide and seek game – exposing and concealing in a systematic way. Today’s generation of young girls wanted to have the good effects of saree but did not want to go through the rigmarole associated with wearing a saree. Saree therefore has presented itself in a new avatar with designers putting their creativity to good use to come out with pre-stitched sarees and elegant embroidered blouses to give that glamorous look. Lehanga and gagras a readymade version of saree a combination of traditional saree and a lehanga choli, also have now become popular among young girls. 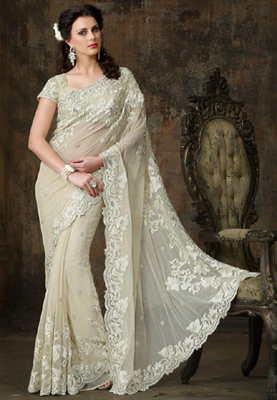 Earlier there was not much hullaballoo about wearing a saree by a woman post adolescent. It was considered normal because saree has been the essence of our culture for thousands of years. The saree personified the growing up of a girl into a woman. There was lot of excitement in buying the first saree or struggling to wear it for the first time, though the same cannot be said about today’s young girls. The herculean efforts that were required to hold the saree in its place during those initial days must be fresh in the memory of a lot of women. Somewhere down the line, because of our hectic lives and the time, skill, inconvenience and other paraphernalia associated with wearing a saree, it got elevated to a formal wear position and salwars took the place of the saree.

Today the saree is ubiquitous in all formal functions in its new manifestation. With designers evincing keen interest in this six yard cloth, experimenting and coming out with exquisite designs and styles studded with bead and precious stones, beautiful prints, exclusive embroideries and beadwork, saree has made a huge impact among fashion conscious women who are abreast of the changing times and evolving fashion trends.

Another advantage of the saree is that it can be draped in several ways and there are designer cholis that augment the beauty of women in a graceful and natural way. A blouse can make or mar the look of a saree however expensive it might be and therefore these days there is more emphasis on well cut matching blouses. It is true that some of these designer cholis can reveal more than they conceal and make an entire fashion statement and that is the beauty of saree. In the coming days we are sure to witness a lot more variations in the drape, style, design, prints and embellishments and a lot more variety in cholis that even go beyond our creative imagination. Being unstitched, saree is quite flexible to make it into the desired drape – stylish or traditional, elegant or simple, and there in lay its universal appeal.

While extolling the virtues of saree it cannot be denied that there are critics who say that saree adds to the vulnerability of women. The proponents of saree who jeer and cry aloud saying, shirts, trousers, jeans-T’s and skirts are revealing and seductive it must be said nothing can beat saree on that count as it reveals the sensuous midriff and the navel, both said to have a tumescent effect on men. Surprisingly the ardent proponents of saree as the most decent clothing are men - may be because it panders to their sensual fantasies more than any other clothing. I wonder what our moral police will have to say on this.

Finally I would like to end by quoting what late Kushwant Singh had said about saree from the book Sex Scotch and Scholrship – selected writings of Kushwant Singh: "The saree is both a very ornamental as well as a functional dress. Properly draped it can accentuate the contours of the female form giving a special roundness to buttocks. A well-cut blouse worn with the saree elevates the bosom and exposes the belly to below the navel. There is no other form of female attire which can both conceal physical shortcomings of the wearer as well as expose what deserves exposure...."

Title: Extolling the Virtues of Saree