2014 a Year of Abhiyaans, but New Focus Needed

This year has been a year of several innovative campaigns (abhiyaans). Campaigns do bring in a lot of enthusiasm and find highlight in news channels. But some questions still remain. Why don’t they subsist longer? Do these campaigns really target an effective change in immoral structures that hamper good values or peripheral change? Yes, if campaigns do not continue to address beyond personal motives, they will meet the same fate as the “India against corruption” venture.

This year the innovative fire began with the Ice Bucket Challenge in the West for a noble cause, namely, ALS (Amyotropic Lateral Sclerosis) patients suffering from the neuro- degenerative disease. Several celebrities gave thumbs up for it. Due to the growing global connectivity, it spread to India too. But it also faced criticism from several activists due to its negligent attitude towards ecological concern of water wastage. Yet an alternate campaign to it that enthralled all, was the Rice Bucket Challenge (the typical desi flavour) to feed the needy and poor. But my sympathy goes to another campaign, Mud Bucket Challenge (ecological initiative of a biodiversity preservation group) that hardly made headlines. What a plethora of ideas Sirji? 4G?

Similarly a few years ago we saw the ‘pink chaddi’ campaign against ruthless moral policing in the south. Muthalik’s Sri Ram Sena was silenced and scared. This recently found its new shoot as we witnessed its nuanced and innovative form of protest - the ‘Kiss of love,’ a unique challenge starting in Kochi, Delhi, Mumbai and getting a grand response. It is due to spread to Bangalore soon amidst controversies. 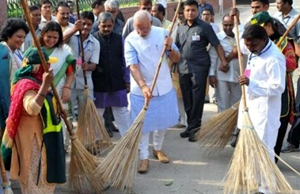 The political arena also learnt from these campaigns when we saw an innovative challenge, namely the Swacch Bharat Abhiyaan. It was a wonderful move from a new government which wanted to prove to the people that they too are pro-people and pro-national. It spoke well to the sentiments of the people. Many celebrities were challenged to continue this noble venture.
But one thing that needs clarity is that these campaigns as such will not hit the core of India psyche, unless they force an attitudinal change. Swacch Bharat is wonderful move like other campaigns. But the Indian psyche has not yet understood the gravity of the matter of cleanliness and eco-friendly way of life because of its effect. Eastern religions, by their charisma, see God in every aspect of nature. But in practice adherents of some religions cannot but find a place to litter anywhere and everywhere possible. It is a known fact that Indians give utmost priority to keep their compounds and house yards clean, but will not ever feel anything about dropping the dirt and waste into the neigbhour’s compound.

The reason for the failure of above mentioned campaigns is that they have not effected inner transformation. These have remained at the external realm as outward commitments or external actions. Only a campaign which speaks for and forces an attitudinal change will boost external cleansing. For instance, the ‘Kiss of Love’ campaign is resisted because it has a message for immediate attitudinal change. But obscenity cannot be compromised. Who decides what is obscene is another big question.

We Indians need to get rid of our corrupt interior for life’s issues and nature. The day we begin to see nature and people as subjects we will stop to be corrupt and will be clean inside (conscience/heart). Then external Swacchata will be easy. The day we see nature too as having its share of respect for life, that will be the day we will begin to respect it and keep it clean. This is the change needed before endorsing an external change to bear fruit.

Therefore the possible alternative is an abhiyaan that would help Swacchatha abhiyaan, namely, Swacch tan-man-dhan Abhiyaan that will ultimately lead to Swacch Rajneeti Abhiyaan. All these abhiyaans are linked.

Let us see for ourselves what the present government is speaking and doing. Today bringing back the black money seems to be a political gimmick and not a genuine landmark. Is there subtle politics even within than enterprise to safeguard those affiliated to the ruling party? What we need today more along with Swacch tan-man-dhan abhiyaan is Swacch politics abhiyaan. On the campaign trail earlier this year, India’s Prime Minister, Mr Narendra Modi, appealed to voters by promising to combat corruption and clean up politics. He was rewarded with a huge national electoral victory as well as success in state elections last month. Talk the Walk?

Recently Mr Modi considerably broke the promise of real inclusive Swacch Bharat when he named 21 new members to his cabinet which included at least five people charged with such serious offenses as rape and rioting; a total of seven are facing prosecution. Ram Shankar Katheria from Agra, who was named junior education minister, has been accused of more than 20 criminal offences including attempted murder and the promotion of religious or racial hostility. Hansraj Gangaram Ahir, the new junior chemicals and fertilizer minister, was another eye-catching choice. He is charged with around 20 offences, including intent to wage war against India, criminal intimidation and abetting a mutiny. On most occasions, this is shaken off by excuses such as political rivalries. Walk the Talk?

According to the Association for Democratic Reforms in India, about one third of central and state legislators face charges, and amazingly politicians facing criminal charges are twice as likely to win election as those who are not. In India this is not new. But when will it change? Yes, only when there is an inclusive ‘Swacch Bharat’ beginning with interior swacchatha.
Are Mr Modi’s ways a contradiction in terms when he wishes to clean India without total internal cleanliness at its root? Political sanitation is as important as sanitary cleansing. A new political culture is the need of the hour. That will lead to an integral Swacch Bharat.

Why display double standards if the motive to cleanse India is genuine? Swacchata must be internal first, then external. One cannot speak of rooting out corruption and bringing back Black money and at the same time continue inducting corrupt people to represent the cabinet. We need non-corrupt leaders to lead India in its drive to cleanse our nation. This is the ultimate Swacch Bharat abhiyaan. Only then India will benefit from campaigns. When we don’t catch the devil by his ears we will not be able to tame it.

Above all, there is need for ‘Swacch Mind’ of governance. Our nation is truly in need of many other Swacchata Abhiyaans like cleansing from discrimination, communal tendencies and the concocted concept of development. But let us cleanse our inner motives first. Then development will not merely be signing projects that build industry and infrastructure and cleanse sacred rivers and build bullet fast trains. It will be a development that will take into account the well-being of the poor, raising their living standards and bringing a smile on their faces. May the tribe of Abhiyaanwalas increase with concrete motives!

By Lancy Fernandes
To submit your article / poem / short story to Daijiworld, please email it to news@daijiworld.com mentioning 'Article/poem submission for daijiworld' in the subject line. Please note the following:

Title: 2014 a Year of Abhiyaans, but New Focus Needed