The Less Among Equals

“We've begun to raise daughters more like sons... but few have the courage to raise our sons more like our daughters.” ― Gloria Steinem

A few days back I happened to read a small article on the webpage of 'The Logical Indian', about a man who offered a seat to a woman in the bus and in return got slapped at, with resenting looks from the other passengers. In his defense all he wanted to do, was offer a tired lady his seat, but she misunderstood it to be some kind of lewd behaviour. The poor man didn't say a word but humbly accepted the humiliation and alighted at the next stop.

I have a read a lot of articles revolving around the atrocities that women had to face at the hands of a man, articles about fighting and standing up to your rights against men. Being a strong, independent women, I am in all support to this fight, but who exactly am I fighting against? Is it against a man offering me to carry my heavy bag, or a is it against a man offering to drop me back home late at night, or is it against the same man who tried to offer the lady that seat in the bus? 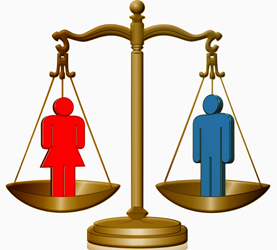 In a country where nearly half its population is trying to fight for women's rights, we also have a few iniquitous people, running rackets to trap young and educated men and blackmail them into paying money. If this money isn't paid, the innocent man is charged with molestation and of course who would listen to his plea. At one hand, where majority of rape victim are females, we also have a handful of male rape victims, but how many cases of male rape victims do we hear of? For how many of these cases do we raise our voice? Moreover how many of these cases even come to the forefront? Not many do, and the reason behind this is, there is no one to support a cry of a man, simply because the society never allows a man to cry. A man is suppose to be strong, courageous, muscular and never a victim of a crime. Men are supposed to respect women, love them, protect them from every danger, take charge of all the work, but are never allowed to break down. Isn't this a lot of responsibility on one shoulder? But take a look at your father, your brother or your husband, who work tirelessly everyday to make our life comfortable. I don't deny the effort that a mother, a sister or a wife puts in, but at least we women are allowed to cry, complain or 'nag'; but men are not allowed to do even that much. For every woman out there, try to imagine a moment of happiness and not being able to express that in the form of a tear, or a moment of pain and not being able to cry over that, or not being able to talk to your family or friends about the problems in life... Isn't that too much to ask?

When we teach a brother to protect his sister, we aren't empowering the girl, rather weakening her and letting her know that she is incapable of protecting herself. At the same time, we inculcate the values of manhood in a boy and let him know that he can never cry or get hurt. This expectation that we have from a boy, to become a so called 'Macho-Man' is the biggest problem of our society today. When you can't live up to the expectation you either try to enforce it or hide it, neither of which benefits anyone. Again I come back to my question, who is it that I am fighting against or who is it that I am fighting for? Most of the times we are so carried away in our uprising that we forget our cause. But one must know that yelling in a crowd without knowing the reason is not just ignorance but foolishness too.

As we step into 2015, let's all fight for a good cause. Appreciate all the good men in your life, say a thank you, appreciate every brave woman you come across. In a small way almost all of us can make a difference. All we have to do is teach our future generations, help your daughters to be strong, teach your sons to be a gentlemen not protectors. Help them to stand against injustice and you never know, 10 years from now our next generation would be living in society known simply for - Equality.

By Jane Tellis
To submit your article / poem / short story to Daijiworld, please email it to news@daijiworld.com mentioning 'Article/poem submission for daijiworld' in the subject line. Please note the following:

Title: The Less Among Equals