"Don’t play around. Come sit by me, I will tell you a good story," said my grandmother as she wiped the wooden seat beside her. The room was dimly lighted by the fire in the corner as power was not there that day. She pushed some woods into the fire and blew with a hollow pipe. Her fingers lean and fragile pulled back a lock of hair behind her ears as she bent to blow the fire again. Hriiyio, my youngest brother took the pipe from her hand and blew till it sparkled and crackled vigorously. Slowly my two sisters who were playing with stones near the door by the moonbeam came and took their seat next to me by the fire.

"Apei, will you tell us about Ghosts and Gods today?, asked my youngest brother sitting beside my grandmother with his arms on her lap. "It is a taboo to speak ill of them. We should not talk too much of them. They can hear us, don’t talk," she replied softly almost as a whisper.

Her hair had grown white with her age and thousand lines folded on her skin. The smile became feeble and her every step became slower. Her eyes revealed a sea of emotions and her mind spoke only of the bygone days. Once when I asked her how she met my grandfather, she gave me a shy smile touching her hair and said, "I never met him. I was told I would be married only the previous day of the wedding but your grandfather was a good man. I was lucky."

My grandmother took a deep breath and clicked her tongue and began, "In olden days people hunted heads for prestige and honour in the village. The more heads you hunted the more honour you got as a warrior. Till the arrival of the British in the Naga villages people lived in war and the art of Head Hunting. So it was not safe for one to travel alone or be late for anything. In the morning and in the evening if people had to go to field and come back, the strong and well built men escorted them or the groups called out for each other. The villagers were always in groups.

"In one village there lived a widower with his only daughter Kholia. He was hardly ever at home for he was a trader. He traded salt for food and other things from the next village. To obtain the salt he and his friends had to camp in the forest by the salty spring water. They boiled the water in big cauldrons to make salt. Sometimes it took weeks. His daughter would be alone at home for weeks. He loved his daughter and he felt sad about leaving her alone for weeks. He had to get married again to give her company, someone who can love her and look after her as her own child. 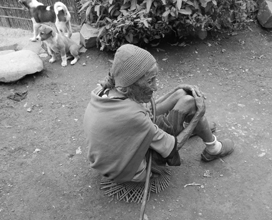 "So he got married. She was a paragon. She looked after them and Kholia’s father was happy. He was contented that his beloved daughter was looked after properly. He would be gone for days but he never came back empty handed. Kholia meanwhile was always busy. She slaved for her stepmother when her father was not at home. She cried for her mother every night to sleep and woke up sorely from all the hard work she did the day before but there was no escape. She could say anything to her father because she was treated lovingly in front of her father. Kholia was never giving the time to have fun with her friends. Her friends went to the forest to gather fruits and tree barks for weaving dress while she worked at home. She pounded the rice everyday, clean the house and carry water. When she saw them enjoying, she would swallow her tears and go on with her pitcher for water. She could do what others had been doing, she could only look."

"But grandmother why couldn't she complain to her father that her stepmother was ill-treating her?," one of my sisters asked. My grandmother did not reply. She looked at the fire and just went on with her narration, "One day her father brought bangles for her from one of his journeys. She loved her father and was happiest when he was at home. Her father never doubted that Kholia was suffering because she never showed. If her father was happy she was contented because her father loved her.

"One day, Kholia went with her friends to gather plants and tree barks. She saw a healthy plant growing beside a lake a little far from where her friends were gathering. She stretched out her hand to pluck the plant. The bangle which her father gave her just broke and felt into the lake. The lake was a dwelling place of the forest spirit. He took the bangle before she could. She was very sad because it was her father’s gift but glad that she was spared. When she reached home and told the story about how she lost her bangle, her stepmother did not believe her. She told her husband that Kholia might have given it to her friends or some admirers. Her father asked her if it was true. Kholia was devastated because her father refused to believe her.

"She told her father, 'Father, tomorrow with the first cock crow we will both go to the lake and reclaim it,' and she went to bed. The next day with the first cock crow Kholia and her father set for the lake. When they reached the lake Kholia called out to the lake, 'Oh mysterious and divine lake if you are truly mysterious. Give the bangle and take me'."

"Within a few minutes there was a storm inside the lake and a large wave threw out the bangle and the wave carried Kholia into the middle of the lake. A whirlpool drew Kholia inside the water slowly. Her father cried as he saw his only daughter lost because of a silly bangle and a bad wife. He asked the lake to take back the bangle and give his dear daughter back but it was too late. Kholia called out to her father 'Father go home early, the time is not good. It is war time and you are not safe' and she disappeared under the water. Kholia‘s father went home in tears. He cursed himself for been so blind. He sent away his wife packing with the only thing she brought to his home, a huge mud cauldron.

"See your great grandparents had a song. It says ‘Which life is better? A house with a bad spouse or a leaking roof? A leaking roof can be mended but a cruel spouse is worse than sleeping among the nettles’," said my grandmother "They had a difficult life. They do not have the luxury that you do. They slept on a wooden bed and wore clothes made from tree bark. Today your generation are sleeping soundly and eating your fill."

"Apei, aren’t you going to tell us the story of the two sisters, Charani and Kapeeni today?" asked my sister Hriiyini. "Nghi, I have to go to field tomorrow and I will be tired. Go and sleep I will tell you tomorrow," she replied.

"Go, obey Apei or else she won’t say stories again," I said sternly. They went back to their own room and I went to mine. I heard a cock crow and it was only ten o’clock. "These days even the domestic animals do not know their time," grumbled my grandmother. I smiled and closed my eyes waiting for tomorrow to hear her tales again.

By Ashuli Kaisa
To submit your article / poem / short story to Daijiworld, please email it to news@daijiworld.com mentioning 'Article/poem submission for daijiworld' in the subject line. Please note the following: