How Do We Stop Our City from Burning?

Over the past few weeks the southern coastal belt of Karnataka has been fuelling along harrowing temperature with the re-emergence of the old ghost of communal disharmony. The region has turned intense and volatile, as the layman feels insecure, cops are left patrolling with sleepless nights, journalists are sprinting place to place with cameras on and politicians are busy making vote-grabbing statements. To make matters worse, the eveningers (evening media outlets) publish filth and garbage with false and misleading contents, amplifying the knife-edge mood.

The most disgusting part in the unfolding of the events was the utter irresponsible and menacing remarks made by seasoned politicians, adding salt to the wound. Amidst all the dirt and stain wagging the city’s limelight, the city Police have emerged as the ultimate winner under crisis. Although a few political feudalist and real estate dons have criticised the department for their failure, it should be noted that Police have been exceptionally successful in controlling the boiling point situation. They have played effective role in curbing the violence from escalating further. 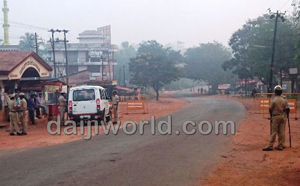 As someone growing up in these regions, communal tensions have been a routine norm ever since the frightful events unleashed in Bombay in the early nineties. Since then, whenever an inter-religious spark hit the headlines thousands of miles away, it would immediately impact Dakshina Kannada creating a hostile environment. But contrary to that, when a humane or constructive work had been accomplished in the neighbouring region few hours away nothing of that sort was remotely emulated.

After completing our matriculation, as we moved to pre-university education, those who didn’t pass through the board exams decided to recede from education once for all. A successful life is assembled out of the decisions and choices an individual makes for himself, and the principle does apply to a society. But unlike an individual, most societies and communities are blessed with leadership hierarchies, and while witnessing such mass high school dropouts, it’s hard to comprehend that their leaders cannot hear the alarm bells ringing.

In recent times, with advent of consumer based market, likewise to other service related products; faith has taken shape of a marketing tool. Individuals have replaced spirituality into organised religion and are bent upon flaunting it on their sleeves. People have inherited hypocrisy, as they shamelessly display their faith with vanity, symbolising their motive more as a political statement than inner conscience. This type of overt religious exhibition is a modern day urban middle class phenomena, one that gets its daily life sutras from social network and 24/7 noise making electronic media.

Is there a solution for communal tensions?

There is no one solution for communal tensions, as it arises due to numerous differences between communities. Culture, religion and language stand major obstacles in process of getting two communities to unite. Dakshina Kannada's problems are deeply rooted in its history. A large portion of the current inhabitants in the region are made up of migrants from across the country. The adherents of three predominant faiths Hinduism, Islam and Christianity speak three different languages, added to that there are enormous discrepancies in food habits, customs, rituals and social outlook. People are lured in the name of religion and culture. The orthodox clergies and extremist political leaders use common man as political football in their quest for glory. Mutual respect, Coexistence and healthy inter-mingling of genders can only save the region from going blaze in few years’ time.

For the last few decades, Dakshina Kannada has progressed steadily, real estate prices have skyrocketed, businesses have grown, multi-storeyed building and malls have cropped up, but all this wealth has also made people of the region highly self-Indulgent. The scale of social and rights activism across the region is negligible, as a consequence social crimes have proceeded with impunity and activities of the crime lord’s remain unquestioned and unchallenged.

Rational education and community outreach programmes with government and NGO’s(Non-Government Organisation) initiation could light a few candles in this dark episode haunting the region. The children of these regions lack cultural assimilation, and the youth belonging to different faiths decline to see eye to eye. There is no willing exertion to escort these misguidedyouth on a single platform to bring social cohesion. Debates, discussions, knowledge sharing are barely encouraged and commonalities between religious and cultural practices have never been discussed. There is a compelling need to find a breakthrough, and it begins when men and women from various communities sit together and start a conversation.

Is the role of woman sidelined?

Nevertheless, such initiatives would take some time to deliver.Unfortunately, the community leaders remain stubborn, and hold their people from intermingling or socialising with rest of the world in public life. The role of women in enlightening torn societies, is never understood. They are reckoned to be household properties, confined to kitchen, and authorised to respect and worship their male folks. The religious patriarchs and clergies need to bear in mind that educating a woman would yield in educating the entire family.

There is no constructive medium to convince this male dominated community leadership to persuade them to push liberation and empowerment of women. Most of its leadership is made up of ultra-conservative, less educated clergy class obstinate to grant women their due rights, move freely, educate, work, earn, interact and emancipate, factors that would succeed in promoting regional and national integration, making the world a better place to live.

Title: How Do We Stop Our City from Burning?