As an educator and expatriate, while working in a desert island country called Bahrain, a question haunted me for long - what do foreigners think of India and Indians?

While the Indian scientists and doctors in the US makes noteworthy contributions in their field, there are at least 8 Indians who have adorned the CEO positions in the US. David Cameron, Prime Minister of UK recently predicted that the future prime minister of the UK could be an Indian. Many engineers, managers and doctors in the GCC countries are Indians. Do all these facts have earned India an image of a beautiful country with genius brains? Well, the second part of the phrase- ‘genius brains’ seems to be true. However, I am not sure about the ‘beautiful country’!

Lush greenery, ever flowing rivers, scenic and enchanting mountains and yet India is not beautiful? Well, my previous question about foreigners’ view about India got partly answered during an encounter with a highly educated person from Jordan. Dr. Hurani was (is) the director of Nursing in a reputed and largest governmental hospital in Bahrain. She was on a sojourn to India as part of a recruitment drive. In the course of interviewing hundreds of nurses and doctors in India, she had visited several cities. “ How was your experience in India?’, I asked inquisitively. “ Amidst my busy schedule, in the evenings I made it a point to go around. India has got lot of greenery but very poor civic sense!” She went on to add, “ In parts of Kerala and Mumbai that I visited, I could not help but cover my nose . I think the Government needs to do something about it!”

If you observe her words, she has a lot of appreciation for the natural beauty of India, but loathes the poor sanitation and maintenance of public places. She is all in praise for the human resource of the country. Indians are brainy, Indian natural resources are beautiful and yet India is not beautiful! Even as this thought was ringing in my mind day in and day out, I read about the ‘ clean India’ initiative of our prime minister Modi. I was so overjoyed. The world’s largest democracy took 68 years to realize the importance of Clean India! Better late than never! 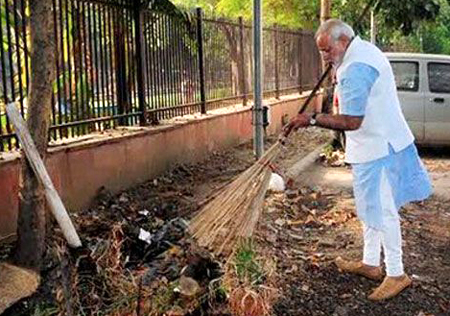 On 2 October, the birthday of Mahatma Gandhi, Modi, the prime minister of India wielded the broom to ‘clean’ India!. It is indeed for the first time in the history of India, a prime minister takes cleanliness as the national priority. As NSS volunteer, I remember cleaning the town by picking the plastic rags. It was half a day progaramme. We, 30 odd volunteers cleaned the whole town. But we were disheartened the next day to see the town littered with plastics thrown around! From the hindsight, now I understand as a leader why Modi is asking people in influential position such as film stars, sportsmen, and MPS to emulate him in cleaning India! In nutshell, it is an awareness drive!

The campaign brought to my mind the image of dirty slums projected in Slum Dog Millionaire directed by Western Danny Boyle. Amitabh Bachchan, Bollywood icon, Mumbai resident and the real-life presenter of ‘Kaun Banega Crorepati’ denounced the movie on the ground that “the movie highlights slums and focuses negative international attention on India—and this is what's offensive.” It was an obvious reaction from a patriotic Indian actor. Nevertheless, the movie should draw the attention of the Government and the NGOs to the grim reality of acute poverty and filthy slums of India.

The middle class and the elite Indians may keep their houses clean but when it comes to public places they act as ignorant as illiterates! It is an old adage that Indians ,when abroad, take care not to spit in the public or make sure to throw the rubbish in the bin but forget all that once they land at home! Is it the price of democracy!?

The novel ‘Clean India’ Initiative has got unprecedented response from all the people irrespective of their political and religious affiliations. From school children to film stars to politicians to priests have supported the movement. The Mangalore diocese of Catholics in Mangalore, for instance, has followed the suit with the tagline ‘My waste , My responsibility’. The media is also inspired! The success of the movement can be truly gauged when every citizen including a politician or a film star in long run is inspired to wield the broom even in the absence of the TV cameras!

The Mission aims to make India ‘clean’ by October 2, 2019, Mahatma Gandhi’s 150th birth anniversary. This goal will include the elimination of open defecation, which Modi called a “blot on society”, especially for women and young girls.

Clean India is the joint responsibility of every Indian and the Governments. Awareness is indeed the first effective step. What the country now needs is concrete action. Mere media coverage will not serve any purpose. The government has to change the statistics on public sanitation facilities in schools and cities. Developing clear policy on different kinds of waste management should be the priority. Let Indian delegation visit different countries and study their system.

It has been reported that nearly half of Indians defecate in the open space. There are not enough number of public toilets in many towns and cities in the country. In such a scenario, it is neither practical nor rational to ban urination in the public places! So the need of the hour is to address issues concerning infrastructure.

Mere awareness will not solve the problem. Everyone knows that smoking is injurious but many still smoke! Enact suitable legislation and issue guidelines to be followed in the public. Gradually impose fines on the offenders and use the money to maintain public hygiene.

Let the campaign be more comprehensive and participative. Like minded associations and NGOs in the country can come forward and their representatives can be trained so that there is an effective action plan. Different NGOs can then focus on different dimensions of sanitation. Let there be a clarion call for schools and colleges to create awareness in rural areas! Let it be an apolitical movement!

By Anthony D'Souza, Madanthyar / Bahrain
To submit your article / poem / short story to Daijiworld, please email it to news@daijiworld.com mentioning 'Article/poem submission for daijiworld' in the subject line. Please note the following: