The Soul Lives On

We’re all attracted to something in a way that we can’t explain. I’m drawn to historical architecture; I’ve always loved dilapidated structures, old temples and shrines…remember the Augusteum mentioned in the book Eat Pray Love by Elizabeth Gilbert – Octavian Augustus, Rome’s first, true, great emperor built it to house his remains. The author believes it’s one of the quietest, loneliest places in Rome and compares it to a precious wound saying, “We all want things to stay the same. Settle for living in misery because we’re afraid of change, of things crumbling to ruins. Then I looked around to this place, at the chaos it has endured – the way it has been adapted, burned, pillaged and found a way to build itself back up again. And I was reassured, maybe my life hasn’t been so chaotic, it’s just the world that is, and the real trap is getting attached to any of it. Ruin is a gift. Ruin is the road to transformation.”

That brings me to why I’m fascinated by these jewels of the past. It’s because each of them has a story to narrate. What’s even more amusing is that the story can be interpreted differently by different people.

Three years ago, when I visited Moodbidri, my home town, I made a trip to the 1000 pillar temple or Saavira Kambada Basadi as it’s better known back home. Moodbidri is known for its many Jain temples though this one is considered to be the finest among them. Legend has it, as one of the care takers of the temple told us that renowned Kannada poet Ratnakaravarni sat on the temple’s stairs leading to the main shrine while he created some of the best classics in Kannada literature. 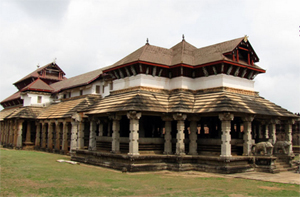 I sat on those same stairs, caressing them, feeling the roughness of the stone against my palm; it was as if I was trying to listen to what they had to say. Lifeless objects come in contact with so many people that over a period of time they cease to be lifeless; they come to life! May be there was something that I needed to know.

I gazed at the statue inside the main shrine, poised and calm, enclosed in a glass frame. I vaguely counted the pillars. They say if you succeed counting all 1000 you get transformed into one – another reason why I love such places, they always have these one off legends associated with them, and whether they are true or not will remain a mystery forever.

Leaning against the wall behind the stairs, I opened my journal.

This peaceful place is such a great work space. The chirping of the birds, the sunlight strewn across my journal, the occasional flow of breeze…it’s a recreation of my work station in the city, the balcony in my flat in Mumbai.

Making this trip on my own has actually helped me become more independent. I was sucked into the routine of my monotonous city life; my work, my friends, my parties….the thought of being so materialistic and of this world was killing me. This morning I bumped into a Biblical verse about how we need to seek spirituality first and then everything else is added to it eventually. The verse advocates a certain detachment to worldly life – we need to fulfill our responsibilities and enjoy life but not become so preoccupied with worldly anxiety that we forget the higher needs; those of the soul; those of spirituality.

There is no better place to explore my creativity than these temple stairs. Writing all morning, each day, against the backdrop of constant chanting of prayers and hymns lends a certain discipline to my art.

I’ve been staring at the pillars in the temple for a few days now. It’s as if they’ve been trying to say something to me. Today I heard them speak. These pillars are the perfect example of bhoga and yoga (attachment and detachment). Each of these pillars is one of the 1000; attached in spirit, they stand together as an army, holding up the majestic temple. At the same time they are detached to each other as each pillar stands alone. How wonderful it would be if we humans could emulate this ideal balance between bhoga and yoga! How wonderful would it be if I could create or discover a character in history who embodies this balance; through his example my readers would find it easier to maneuver life’s daily challenges.

“Living a life of pomp and luxury
Yet supremely detached from worldly pleasure;
A king of kings and follower of ahimsa,
Bharata wins over his formidable brother by sweet persuasiveness.
An epitome of perfection,
He is in this world but not of it.”

Disclaimer: This is an epistolary work of fiction. Any resemblance to real persons, living or dead, is purely coincidental.

Title: The Soul Lives On