Doha, Nov 23: Talent woven in every bit of her, she is determined, gutsy, resolute, disciplined, and meticulous, concerned, ambitious who looked ahead of times and excelled in her chosen fields which varied from her younger days, to marital innings to motherhood, social issues and beyond.
And when Hemaprabha, the grand old lady looks back over her shoulder tracking the 71 long years of the illustrious landscape of her life dotted with twinkles of success, the prime colours she used in painting, the meticulous gardening and eye for detail embedded in every motif of her stature, dreams weaved in her embroidery work, personal tragedy that could not overcome her resolve, it was more than satisfying for her.
She steered her progressive career by being one of the few women to hold a four wheeler driving lenience in the 60s and when marriage pushed her back into the countryside, Hemaprabha took it positively and made most of her knowledge (Science being her favourite subject). She put into practice what we today call organic manure. 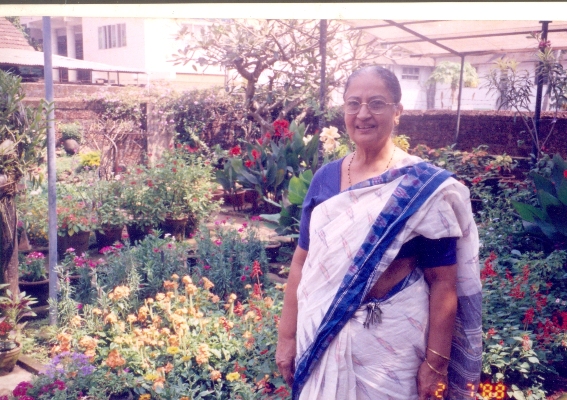 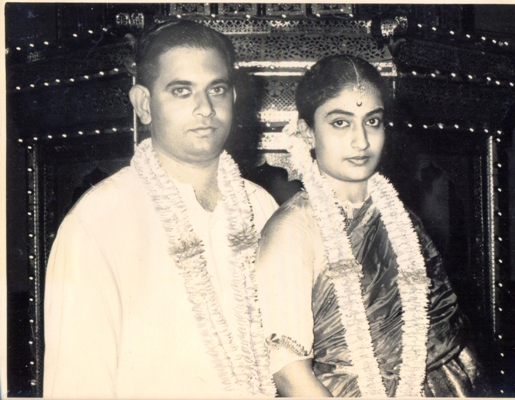 Undeterred by the shattered dream of becoming a doctor, shifting from Mangaluru to a small village, she developed new interests and made life look beautiful within the available resources.
With Bio-diversity summits being the global phenomenon now, this lady has done it in a measure of innovation and made rare orchids survive the harsh coastal weather; organic manure was her mantra, which has become popular much later.
Be it gardening, embroidery or bringing up children her approach was methodic and style of functioning was qualitative and some times innovative as well.
Born in to a middle class family in the coastal town of Mangaluru, Hemaprabha is the second of the six children of the Danges-- Sulochana and Narayan-- who have four girls in between two boys.
Thinking ahead of times, the Danges made sure that their children went to best schools though the times then discouraged education to a girl child. The vision bore fruits when Hemaprabha, went to college and her other sister passed out from the famous Kasturba Medical College. Both sons completed their graduation in engineering one from REC, Suratkal and the other from MIT, Manipal.
Known as Dange sisters, all the girls went to the same Lady Hill, convent school in Mangalore, excelled in studies and they dreamed of becoming doctors. However, the two elder girls were married off early and could not pursue their studies.
Baby, as Hemaprabha was lovingly called, used to study hard and was vocal about her dream of becoming a doctor. She was a topper in studies and also took active part in extra-curricular activities like painting and drawing.Her early works are still preserved and are on display.
Contrary to the practice in vogue, the marriage proposal has come from the boy’s relatives when Hemaprabha was in 12th standard. Though she was pained as her dream of becoming a doctor has ended, she joined St Agnes College in Mangaluru in BSc and married Seshagiri Prabhu in 1960.
An exceptionally good science student with sprouting excellence in biology, Baby was  out of college even before she completed her formal graduation with the marriage to the handsome civil engineer from a sleepy town in Kerala –Kannur (erstwhile Cannanore).The only child of  rich parents, Shantha and Vasudev Prabhu. The couple was blessed with two children, first daughter within a year of their marriage in 1961 and a son after four years.
Shifting from a developed city with broad outlook to a sleepy conservative village, the transformation was difficult to accept for Baby. The new place had language barrier, young ladies stepping out doors was not appreciated, the only job of a young lady was to bear children, look after in-laws and the house! 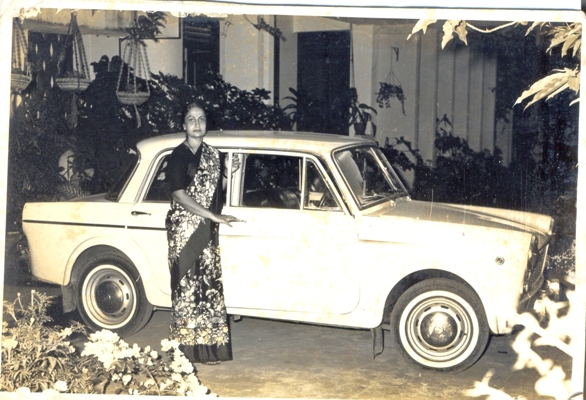 An unexpected change
But that was not to be.The twist in story lies pivoted around the determination of this young lady. She took up the challenge with a positive outlook and the scenario is way back in early 60s. She nurtured her hobbies with greater zeal. Stitching-smocking-embroidery-cross stitch-crochet-tacking-Being a trained oil painter on canvas she took lot of interest in painting nature and human portraits. She has done all this at a time when the country was not appreciative of women venturing into such things.
Gardening being her core strength; she nurtured a beautiful garden consisting of flora, cacti ferns, the latest collection of rarest of rare antirrhinum, orchids and various other collections from various parts of the world!
These plants were difficult to survive in harsh summers and coastal weather of Kannur but they blossomed just by the sheer love and care she sprayed across the landscape.
When today we are talking of research on plants able to listen and understand human association, she had already achieved it much before. Every day she had a spring in her step…What can a widowed lady look forward to. It was a pleasure for her to watch her “own” children grow with the plants, all getting equal attention.
She was doing all this while running the house built by her husband Sesha Prahu in an acre of land and named it Sesha Prabha. Life has been unkind to her in the early days. Her mother-in-law died in 1969 and she took care of the widower till he passed away in 1976, a year later her husband too died.
However, her progressive outlook had put her ahead of times.
She attended Batik classes and made her mark. Her passion for Art drove her further and this time it was canvas. She learned oil panting in her residence due to social constraints and produced some of the best paintings which even today catch the attention of the connoisseurs.
She also took part in every competition, the small town Kannur could offer for women in gardening and flowers. This wonder lady was always there on the podium winning gold, silver or bronze.
She was one the first ladies to possess a driving license way back in 60s!
Male chauvinists had put some blocks but had to finally accept and come to grips with reality. She has paved way for many women who learned from her car driving, bridal make-up, stitching in all forms, painting, and designing of clothes, gardening or landscape. All the women now recall what an imprint she left in their lives.
We are today talking of organic manure but she made one some 50 years back with the help of worms, cow dung and all the clippings and weeds of her garden plants! All the sink wash basins water was used to reach a tree!
Water harvesting…In 1960! Water was plenty those days and this lady thought of such heart touching ideas? Just amazing!
Household chores were done equal efficiency. After the children finished schooling she sent them to Mangaluru for higher education and kept in touch with children through the efficient postal service.
In cooking, her dishes Puttu and stew, Tomato Fish, Ghee Rice & Chicken curry, Chole Batura, Kalamakai (Special shell fish) Fry, caramel custard even the simple upma was the most sought after by food lovers. She learnt cooking with passion as is her wont.
The multi-faceted woman has to be but popular in the small town to which she came some 52 years back and held high positions in the social circuit and Rotary Cub.
She quietly helped the differently-abled people in her designing firm Orchids that designed clothes for newborns frocks and nighties. It provides livelihood to at least 10 girls who feed their families. Prabhaechhi (elder sister), the grand old lady mingles with them and shares joy with them and the unit sometimes runs according to the convenience of the employees and the success of Orchids was recorded in many exhibitions.
Even at this age, she is not averse to learn new things. She always spoke her mind out with frankness and called a spade a spade, this may not be to the liking to some people, but that is her uniqueness as she always respected moral values. Her advice was there for family and friends always.
A power point presentation that captured her life and times was shown on her 70th birthday at the convention hall of the small town.Praises were heaped on her incessantly by one and all and every speaker had an anecdote to share. This was the same old lady who was once considered as bad omen, as she was a widow.
She continues with all her activities even till date and built a beautiful house, nestled in the cradle of nature, in the valley of Mercara town where she spends some time in a year.
Her helping hand is active for poor students who want to pursue their education and for her children there is no velvet so soft as a mother’s lap, no rose as lovely as her smile, no path so flowery as the one imprinted with her footsteps!
By Ravi Shetty
To submit your article / poem / short story to Daijiworld, please email it to news@daijiworld.com mentioning 'Article/poem submission for daijiworld' in the subject line. Please note the following: