In a day and age when more and more scientists are challenging “why evolution is being taught in schools as science when there is not a shred of proof?”, the Pope’s statement has left creationists and believers in an all-powerful God angry and confused. In fact, when the Pope’s statement appeared for the first time, a lot of people were quite sure that the media had mangled his words. They simply would not believe that the Pope could have said something like that.
In a few days, it became clear that the Pope had indeed made the following statement:
“When we read in Genesis the account of Creation, we risk imagining God as a magician, with a magic wand able to make everything. But that is not so. He created beings and allowed them to develop according to the internal laws that He gave to each one, so that they were able to develop and arrive at their fullness of being. … And so creation continued for centuries and centuries, millennia and millennia, until it became which we know today, precisely because God is not a demiurge or conjurer, but the Creator who gives being to all things. The beginning of the world is not the work of chaos that owes its origin to another, but derives directly from a supreme Origin that creates out of love. The Big Bang, which nowadays is posited as the origin of the world, does not contradict the divine act of creating, but rather requires it. The evolution of nature does not contrast with the notion of Creation, as evolution presupposes the creation of beings that evolve.”
Of the many reactions I have read, this comment says a lot: “What the Pope did was continue the departure of Roman Catholicism from the true Christian faith.” Because the true Christian faith has always accepted the Genesis version of creation.
While this article mainly examines the fallacies in the theory of evolution, it also looks at certain questions that arise with the billions of years process. Since youngsters like scientific information to satiate their intellectual hunger, I am mainly using science to debunk the theory. The verses from the Holy Bible are quoted to show how science is actually proving the revelations made in this Book that was written by lay people. And since the authors of the Holy Bible were not scientists, it becomes even more evident that the verses had to be revealed by God through the Holy Spirit. I have no doubt that Christians will find this very interesting.
First, and since many people don’t even know exactly what the theory of evolution is, here is an outline of it:
1. All life forms (species) have developed from other species.
2. All living things are related to one another to varying degrees through common descent (share common ancestors).
3. All life on Earth has a common origin.
4. In other words, that in the distant past, there once existed an original life form and that this life form gave rise to all subsequent life forms.
5. The process by which one species evolves into another involves random heritable genetic mutations (changes), some of which are more likely to spread and persist in a gene pool than others.
6. Mutations that result in a survival advantage for organisms that possess them, are more likely to spread and persist than mutations that do not result in a survival advantage and/or that result in a survival disadvantage. 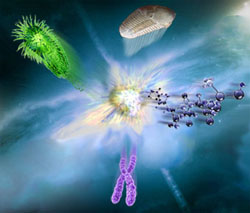 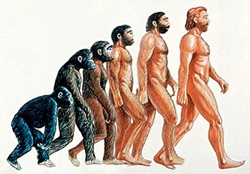 By Oliver Sutari
To submit your article / poem / short story to Daijiworld, please email it to news@daijiworld.com mentioning 'Article/poem submission for daijiworld' in the subject line. Please note the following: