Rise and Fall of Indian Cricket

In the world of glamour and entertainment, there seems to be very little space for class and substance. This has taken a severe cascading impact on cricket’s purest form, the Test, which as it is seems to be losing its essence in the fast track age of madness.
Indian cricket has always struggled against quality bowling both at home and overseas. The God-like Stars that Indian cricket produced over the years, managed to excel in slow tracks of the sub-continent but succumbed in fast bouncy tracks overseas. Although, they had been reliable against spin, India has been tormented by any kind of fast bowling in the overseas all through the history. 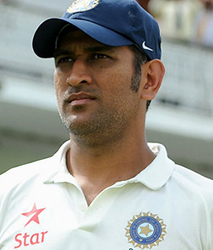 Mahendra Singh Dhoni and his team have suffered humiliating defeats in test matches over the last four years. After surrendering to complete washouts in England and subsequently down under in 2011, his lackluster youthful side suffered almost similar losses in South Africa, New Zealand and recently at the hands of an ordinary England test side. Some experts and former cricketers have fired all bullets at the skipper’s end. They have dismissed his strategies as obnoxious and absurd. Dhoni is a sound decision maker, cool and emotionally controlled man, but his Midas touch has so far applied only to the shorter version of the game, in the game’s longer format, which is the original version of cricket, his brain suddenly seems at best mediocre. Under this man, the team looks empty and spineless, and bereft of any kind of resurgence and fighting spirit.
A team needs leadership. And captain makes it all possible, his caliber as a leader comes into prominence when his side is going through a rough phase. Bullies are easy to lick, but when the times are harsh, it takes more than just good captaincy to resolve matters. Captaining India is a herculean task, Captaining any team is not easy, but India is particularly difficult as the players differ in backgrounds, languages, food habits, culture and one needs to be conscious of these facts. He has to be to be pretty strong on his strategy and tactics, and understand the finer points of the game.  The players also have to realize, that their leader understands the game better then they do.
Dhoni’s problem is that he does not understand Test cricket, he does not understand it because he does not particularly like the format, and therefore his records show that he is simply not good at it. Largely influenced by the cash rich IPL and the colorful crowd pulling limited overs cricket, which enabled him grow and prosper as the national icon, in cricket's purest format, the Indian captain runs of out of ideas and skills in leading his side, making the fans and former cricketers cringe at his disastrous moves and tactics. He listens to no one (with exception of N Srinivasan), Dhoni remains unquestioned and untouched. Not just that, Dhoni has failed to inspire his younger lot, who look up to him. Moreover, his Test cricket Illiteracy has become a sort of cold secret and a mockery among every player in the side. Sadly, most of them seem to have a major faith-deficit in his captaincy, much as the captain himself.
But this is not how things usually were in the yesteryears of Indian cricket. India’s resurgence in the world of cricket as a force to reckon lit up in the sixties, largely under the leadership of a young, aggressive and a flamboyant Oxford educated Prince turned cricketer Nawab of Pataudi Jr, cited as the ‘Greatest Indian Captain Ever’.
In the midst of the rugged Caribbean series in 1961, the then captain Nari Contractor suffered a blow on his head against West Indian pacer Charlie Griffith, forcing him to retire from cricket. The 21-year-old Pataudi was rushed in as the emergency skipper, and thus would kick start a pathbreaking chapter in the history of Indian Test Cricket.
India had just achieved Independence and as a new nation, its players too were lacking a certain amount in confidence, especially against the white teams. The side feared facing fast bowlers and their fielding standards were dismal, Pataudi instilled his team with confidence, trained his men hard and managed to dissolve the inferiority complex. His first duty was to read, study and analyze the psyche of his players. He had to know them personally and work towards their strength. To Pataudi, instinct was a mixture of experience and common sense. Pataudi himself had battled out of a fatal car accident while as a student at Oxford, which permanently damaged his right eye. Most feared that it would end his cricketing career, but within a few weeks young Pataudi was back in the nets. His brave exploits earned him the nickname ‘Tiger’. 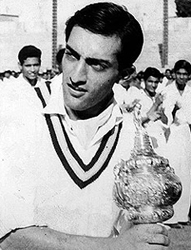 Pataudi’s team was not the glamorous swashbuckling million dollar babies, which Dhoni is blessed with. There was no cash rich IPL, there were no mega corporate endorsements, in fact not even substantial money in cricketing world to even financial support the player’s kits. Most of them worked in private and state owned companies and played cricket as a passion.

Tiger Pataudi’s greatest achievement was in developing highly effective spin attack. Pataudi believed that spin was India’s greatest strength, and introduced Bishen Singh Bedi, Venkatragavan, Prasanna and Chandrashekar, all of whom groomed to be outlined as the cricketing legends of their respective era. His best stint as a captain came in the twin tours of Australia and Newzealand in 1967-68. There were no super stars or God-like characters in the side. The side had a few reliable batsmen and sharp quality spin attack. And most notably, back in those days, there was nothing covering head, chest, thigh and arm!
One defining player in the side was Rusi Surti, an allrounder, who bowled medium pace and batted in the middle order. Surti’s exploits in the tour was widely acclaimed, as he finished the tour as the leading run scorer and wicket taker. Some Indian fans labeled him as the ‘India’s answer for Garry Sobers’!. Playing hostile Australian pace attack with likes of Garth Mckenzie, Conolly and reenberg without helmets and efficient body guards was never going to be easy.
At Melbourne in the second test match, adding to his handicapped vision, Pataudi had injured his foot, but nevertheless joined all-rounder Rusi surti to defy maverick pace bowling and helped reeling India to nurture the collapse, with a score of 75 & 85 in both innings, as one journalist observed it as the “Innings of one One Eye and One Leg”. Although, India lost all the four test matches, they came close and fought well. The tour helped them to set up a historic 3-1 series triumph in Newzealand in following weeks, making it the first ever overseas triumph for India.
Pataudi’s legacy followed even after his axing from the side, the foundation he laid, duly assisted future captains like Ajith wadekar, Bishen Singh Bedi, G Vishwanath, Sunil Gavaskar, Kapil Dev and the rest. Unfortunately at this time, Indian cricket is experiencing a steady decline and the foundation laid by Tiger Pataudi is effectively collapsing under the leadership of the Autocratic Captain Mahendra Singh Dhoni. The team seems to be high on overdose of glamour and glitter signing remunerative contracts in dubious cricket formats sponsored by greedy corporate dons. The blood and sweat shed under Pataudi, in improving all three divisions of the game, has faded away in recent times, due to the emergence of lucrative shorter formats of the game that demand less quality and class. Between Tiger Pataudi and M S Dhoni, Indian cricket history will be marking this period of over fifty years as both crux and crucial, from its rise during the former’s era to its descent under the latter’s reign.