Give My Fragrance Back

October 15, 2014
The reader may wonder what I have to write about fragrance. Well, there is. Fragrance is different from smell, fragrance is different from scent which we use on our bodies. I am writing and elaborating on fragrance, fragrance of nature which is, sadly, a rarity these days.
The word ‘perfume’ originates from the Latin word ‘per fumum’ which when translated literally give the meaning – from smoke. There is a mention of perfume being used from time immemorial. In the second century B.C.E. the use of perfume is mentioned in the history of Egypt and Mesopotamia. The Hebrew word ‘messiah’ means the anointed one and it is common knowledge that anointing is done using fragrant oils, possibly extracted from nature’s abundance. Again in the Psalm 45:8 it is said. ‘All your garments are scented with myrrh and aloes and cassia out of the lovely palaces by which they have made You glad.’
However, I take courage to say that it would have suited this write-up, had the word used was ‘fragranced’ instead of scented. But, nay, I am not competent to alter the Holy Scriptures!
The fragrance I am referring to in this write-up refers only to the fragrance of Nature.
You will certainly ask me – does such fragrances still exist on this Earth? There is only the filthy smell which we call pollution and the present generation calls it their atmosphere. It is born in it and it does not know the difference. 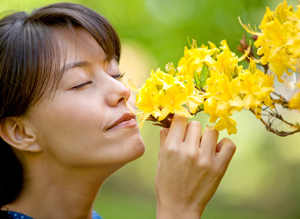 However, at times I feel that all is not lost. Crazy I may sound, there are times when a tree blooms in the corner of a compound or on a green patch where the axe has not reached, skyscraper has not raised its ugly head nor a metro rail has not chug-chugged. Some of these fragrances may act as catalysts which bring back some faded memories. In 1955, I was operated upon by (Late) Dr.M.D.Adappa for the removal of my tonsils. The blooming of the wild champak generates a fragrance to which many are allergic but to me it brings back memories of the morning I lay supine on the operating table waiting for the chloroform mask to descend. Doctor’s clinic was surrounded by these wild champak trees and they were in bloom and strong fragrance of the flowers permeated into the operating theatre which was not air-conditioned nor sound-proof. Now whenever, rarely though, I smell these champaks, that morning comes to my mind.
There was a cashew apple tree at the far end of our compound which bordered the then famous Shresta’s Bungalow (present day Roshni Nilaya). This tree bloomed in summer, just a month before our school exams and it was a sheer ecstasy to sit on the forked branches of this tree and pretend to study and ward off Mom on the pretext of ‘revision studies!’
Sentimental fool am I? Proud to be so.
It was during one of vacations from the job I held in the Middle East, I wanted my young daughter to know how beautiful a fruit pomelo (thorenje in Konkani) is from the inside given the fragrance and the exquisite pink color of the sweet-sour segments. I failed to find a fruit anywhere in the vicinity. When there are no tress where will the fruits come from? At the same count where are the ‘bindam, rumbad, jambloo’ trees?
Cutting down trees and squashing greenery is now in our blood. We are geniuses. We have offered sacrifices of those marvelous trees to make way to the metro rails and high-rise buildings, with an assurance that these centuries old trees will be ‘transplanted’ elsewhere. A feeble attempt indeed to push a fetus back into the womb. How far this has succeeded is anybody’s guess.
Yes, progress is a continuous process and it does not stagnate. It cannot be stopped. It is ruthless to the extent to make this Big Blue Marble void of greenery, natural fragrance and beauty. Amidst all this annihilation, our Mother Earth is garroted and it pleads – Give My Fragrance Back!

By Edwin J F D'Souza
To submit your article / poem / short story to Daijiworld, please email it to news@daijiworld.com mentioning 'Article/poem submission for daijiworld' in the subject line. Please note the following:

Title: Give My Fragrance Back