About a month and a half ago, I attended the Global Energy Forum at Stanford University in the USA. Among the many prominent speakers there were Microsoft’s Bill Gates, former US Secretary of State George Shultz and California’s Governor Jerry Brown. The forum addressed one of the most pressing issues of our lifetimes - global energy and climate change. I would like to present some of the things I learnt at the forum along with India’s role in the global energy playground.

Energy is a direct measure of prosperity and standard of living. Everything that makes your life comfortable needs energy - transportation, almost everything in your house from your AC to your fridge, industrial processes that manufacture everything you use from plastics to metal to furniture, and so on. The World Bank’s report on World Development Indicators [1] clearly shows that the most developed countries have a much higher per capita energy consumption than the least developed countries. India’s energy consumption per capita is one third that of China, and just 12% that of the US [to put things into perspective, here’s a personal experience - I’ve been in the US for over a year, and there has not been a single scheduled power cut, whereas in Mangalore, we have to endure frequent power cuts]. India’s development will undoubtedly be fuelled by an increase in energy consumption, but this economic development belies a growing problem - climate change caused by CO2 emissions.

There are a lot of questions surrounding climate change, with most of them being along the following lines: 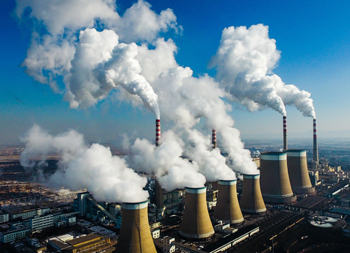 Anthropogenic climate change is a set of rapid interrelated changes in the Earth’s environment due human activity, largely CO2 emissions. This includes increase in Earth’s mean surface temperature (also known as global warming), rise in sea level and acidification, extreme weather events, and so on. To showcase how relevant climate change is, note that 2015, 2016 and 2017 were the three hottest years on record since 1880 [2]. The correlation between Earth’s temperature rise (over 1.2 degrees C since the pre-industrial era) and CO2 levels is striking [2], and it is highly certain that atmospheric CO2 levels are a major cause of global warming today [3,4]. It is also highly certain that sea level rise due to global warming (global warming causes thermal expansion of water and melting of polar ice caps). While the increase in global temperature and loss of polar ice has been strongly linked to anthropogenic activities (particularly CO2 emissions), there is no consensus among researchers about the link between extreme weather events such as forest fires, cyclones, droughts etc and anthropogenic causes. There is some evidence that extreme weather events are indeed connected to global warming, but a concrete link still remains to be established. Now, concerning the timeline, it is expected that global temperatures will increase by over 2 degrees C by 2040 if emissions continue as before, well within our lifetimes for most of us reading this article. While the effects of this are uncertain, we risk mass disruption in agricultural activities that produce our food and increase in extreme weather events that will be costly in lives and damage to property [5].

India is the third largest CO2 emitter in the world, emitting more than 2.5 billion tonnes of CO2 in 2016. More than 90 percent of India’s energy comes from fossil fuels, mostly coal. India, therefore stands to gain a lot if the dependence on fossil fuels is reduced. Aside from the obvious reduction in pollutants and a lesser impact on global warming, an increase in renewable energy production would help reduce dependence of fossil fuel imports, thereby reducing our oil debt. Solar energy is especially enticing as India gets six times the sunlight needed to power itself! Millions of Indians live off the electricity grid and solar energy has the potential to transform their lives while not contributing to emissions. The key to this is the availability of cheap and efficient solar panels. There is reason to be optimistic - India has increased its solar capacity by almost ten times over the past fifteen years [6], with Karnataka leading the race! The cost of solar electricity is expected to reach and even get below the cost of coal powered electricity in the next few years, making solar power a true game-changer in India’s energy landscape [7].

Another sector that is going through a major reform is the automobile sector, with the Indian government pushing multiple initiatives supporting electric vehicles [8,9]. Electric vehicles, when powered by clean electricity, have the potential to cut CO2 emissions by about 4 tonnes per motor vehicle per year. Ongoing R&D in batteries will potentially enable electric vehicles to achieve cost parity with their gasoline counterparts in the next decade causing electric vehicles to become economically viable for prospective buyers. Of course, the charging infrastructure for millions of electric vehicles and grid compatibility are issues which will need to be addressed [10]. Despite the many challenges that lie ahead, it is encouraging that India is undergoing rapid and positive change on multiple fronts for clean energy.

With the global energy landscape changing rapidly, it is crucial that we become more aware of the changes happening around the world and encourage our leaders to take decisive actions that will secure India’s energy future - in other words, your energy future!

By Joel Martis
Joel Martis is a graduate student at Stanford University in the USA. He is pursuing his MS and PhD in Mechanical Engineering with a focus on nanotechnology.
To submit your article / poem / short story to Daijiworld, please email it to news@daijiworld.com mentioning 'Article/poem submission for daijiworld' in the subject line. Please note the following: