Mangaluru, Oct 26: Periodic outbursts of violence in various campuses across the country rattle the nation with increasing frequency. Demonstrations, destruction of public property, burning of effigies, attacks and forced closure of business establishments culminating in a police lathi charge have become routine in the print and visual media. Why is there so much of rage in our angels?

We all take great pride in telling the world that we have the youngest population that any country has and that we will lead the world of the future. Have we ever paused to think as to what the world will be thinking about our young population? The lawlessness, widespread indiscipline, morchas, suspension of teachers, sacking of vice-chancellors, and the repeated clamour to get labelled as ‘backward’ by various sections of the teeming population, must be making the world wonder as to what is the worth of this young population?

The influence of the visual media on the conduct of the students needs no mention. The low level of debates on petty issues that dominate TV channels is characterised by constant, aggressive shouting, yelling and screaming between the participants and the moderator. The students construe that this kind of conduct is the norm in a debate. No wonder the youth display unnecessary bellicosity on campus. 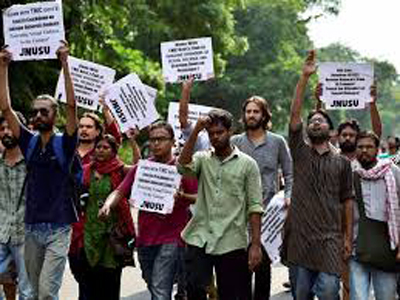 Strangely, this affliction is confined to government-run schools, colleges and universities, where token fees, nominal hostel charges, or free facilities are granted. Private institutions and colleges, which are very expensive, are not confronted by this destabilising violence. Recurring episodes of violent disturbances in government-run universities has a strong political dimension. A stray incident like a suicide, rape, or eve-teasing sparks a violent confrontation between the students and authorities.

Campus elections are a major source of violence and bitterness among students. All political parties have targeted government colleges and universities for recruiting fresh cadres, brainwashing them with their respective ideologies, and using them to trigger periodic unrest and violence against the government of the day. The Kerala High Court in a recent landmark decision has banned the practice of elections in colleges.

Students graduating out of government institutions and government-run universities face very bleak prospects in the job market. The reason students of IIT’s and IIM’s do not get embroiled in such mindless disputes and violence is their high fee structures. Students understand the financial burden that their families are bearing in the form of bank loans, the sale of immovable property and jewellery, and borrowing from private sources. Cheap education has resulted in degrees that have hardly any value in the job market. It is quite common to read about engineers applying for jobs ranging from civil services to even that of a postman. While the country faces an acute shortage of doctors, many doctors opt for civil services. These distortions in the job market create insecurity in the minds of the youth about their future. Anxiety and pent-up anger are displayed in sporadic violence, and disturbances keep erupting in the campuses for trivial reasons.

Job for the educated Indian means a government job, till they get it they deem themselves unemployed. This notion needs to be changed by building the spirit of entrepreneurship, business skills and acumen, teamwork, and leadership among students. Government employment needs to downsize considerably. The continuously expanding population growth has given India the dubious distinction of having the largest number of births every year. Unless this population hyperinflation is restrained, student unrest and violence is only going to multiply. A third baby needs to be treated as a luxury and subjected to a population tax, apart from withdrawing all income tax concessions to the family for life. Desperate times call for desperate laws and measures.

The incessantly rising cost of living also puts great stress and strain on the young minds. The modern-day materialistic world and its varied offerings are all beyond their reach adding to the frustration and anger. 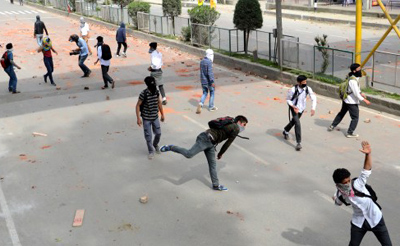 The exodus of well-off students to western countries for higher education causes envy in many tender minds, whose parents cannot even think about such luxuries. To create a violent ruckus for a reason, howsoever trivial, becomes a norm among disgruntled students. The imposition of a dress code, restrictions on hostel timings, the toughness of a question paper, strict valuation of examination papers invites massive and widespread wrath which may end up in violence on the streets in the form of destruction of public property.

Another factor causing considerable heartburn among the students is the wilful discriminative policies enunciated by the government. Students belonging to particular religions are favoured with fee waiver, interest-free bank loans for educational purpose, interest-free bank loans for higher education in foreign countries, special free coaching for civil services, while those belonging to a different religion are denied these benefits. Severe disparities develop among various groups of students and are displayed by venomous rage even for the most flimsy reasons. Bottled up anger and fury of students gets unleashed for trivial reasons. The discriminatory policy of the government is turning universities and colleges into battlefields.

How do we curb the violence and aggravated indiscipline? One solution is the introduction of compulsory military training. To start with, the government should make military service mandatory for everyone undergoing professional courses. It will not be an exaggeration to state that the Indian population constitutes the most indisciplined mass of humanity on this globe. Whether it is the Elphinstone Road bridge stampede in Mumbai, airport brawl in Raipur by the son of a leading singer, hospital deaths in Uttar Pradesh, West Bengal chaos on the roads, or litter piled up in every nook and corner, are all perpetrated by the so-called educated Indians. There is a clear lack of self-discipline among the educated Indians which can be corrected by introducing compulsory military service in the education curriculum.

Student indiscipline needs to be ruthlessly stamped out as it has become a malice. Parents, government, school administrators, lecturers, teachers and community leaders should collectively bequeath a lasting solution to the indiscipline in schools, colleges and universities, to make students reasonable and responsible citizens of tomorrow.