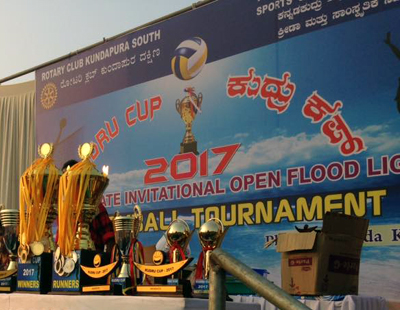 The coconut palms swayed, all brimming with pride
Welcoming sports stars to its once quiet side
Kannadakudru was ready all eager to host
The first ever Kudru Cup, Volleyball the sport

The bridge was inaugurated just a few months before
Four fields were flattened and readied to score
Sponsored and organized by Kundapur’s Rotary Club
And Moovathumudi Kannadakudru youth right at the hub.

It was that time when the lunar tides threaten to swell
Yet it did not dampen the enthusiasm, we sure could tell
Players were sponsored and teams were created
National, state, district and budding locals got baited. 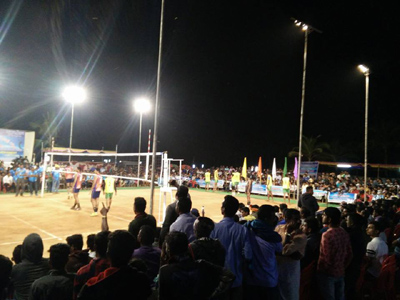 Two thousand chairs were laid for spectators to sit
The court had its markers and was flood lit
Parking was provided, there were stalls selling food
The volunteers, the photographers created the festive mood

Many were honored and there were speeches galore
One was Moovathumudi’s own Rayson Rebello
His place in the national team made everyone proud
And certainly his presence drew in the crowds.

T'was the evening of January 14, everyone was apprehensive
Not knowing what to expect, will the crowd be responsive
The first match between two local teams at 7 pm was played
The crowds began pouring in, no time to be dismayed.

The referees from state and national levels were introduced
The ball boys in red T-shirts ran to their positions and stood
The teams were then called in, they began to warm-up
They were introduced one by one, they had to win the Kudru Cup 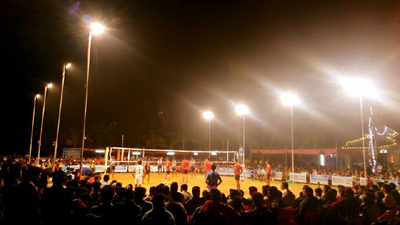 And so until 3 am the teams played against each other
They served many aces, and some were blocked by the defenders
The passers and setters, the spikers smashed the ball to the floor
The island could hear “Cut” as the crowds began to roar.

Next day, the semi-finals saw four teams play their very best
It was Riverbanks from Tamilnadu putting Golden Boys to the test
Jonathan Hurricanes had the local star Rayson Rebello
As they won their semi-final by beating CQL from Bangalore.

It was already passed midnight, the island’s waters, the tide gains
And the finals began as Riverbanks met Jonathan’s Hurricanes
They defended, they attacked, they passed and they spiked
And the crowds cheered on, the teams they had liked.

Both teams fought hard, the game kept even
But Jonathan Hurricanes were not to be beaten
After clinching the title, their sponsor Joy Braganza
Was dancing to the beat of some music extravaganza

I have told this story to bring this memorable event to you
How successfully it was organized in the quiet Kannadakudru
Congratulations to the players, the organizers and the crew
It was the first Kudru Cup, and we’re all proud of you.

By Jasmine Carvalho
To submit your article / poem / short story to Daijiworld, please email it to news@daijiworld.com mentioning 'Article/poem submission for daijiworld' in the subject line. Please note the following: