Storm and Stress of the Young

Young people (aged 10-24) constitute almost 1/3 of the total population. Today’s youth are healthier, more urbanised and better educated than earlier generations. In the course of transition to adulthood, they undergo a lot of changes along with significant risks. G Stanley Hall (1904) proposed that youth is inherently a time of storm and stress. Aristotle stated that youth "are heated by nature as drunken men by wine." Socrates characterized youth as inclined to "contradict their parents" and "tyrannize their teachers." Rousseau relied on a stormy metaphor in describing the young: "As the roaring of the waves precedes the tempest, so the murmur of rising passions announces the tumultuous change.... Keep your hand upon the helm," he advised parents, "or all is lost”.

The phase of youth is of ‘storm and stress’ . It is one of the difficult stages of life where the individual undergoes a continuous conflict between the newly perceived independence and the dependence especially on the family. This developmental phase is characterized by changes in virtually every aspect of an individual's life, and calling for new psychological adaptations. It is the time of heightened emotionality as the individuals experience more intense and wider range of emotions. During this phase, the adolescents derive stress both from normative experiences of development (example, developmental challenges such as puberty, school transitions, increased academic demands), non-normative stressful life events (example, divorce or separation of the parents, moving to a new place), and daily hassles (example, peer group pressure, parent-child conflict).

Taking historical and theoretical views in combination with contemporary research, the core of the storm-and-stress view seems to be the idea that youth is a period of life that is difficult in some ways than other periods of life and difficult for the young as well as for the people around them. This idea, that youth is difficult, includes three key elements: conflict with parents, mood disruptions, and risk behaviour. In all three areas, evidence supports a modified storm-and-stress view that takes into account individual differences and cultural variations:

2. Mood disruptions: The young tend to be more volatile emotionally than either children or adults. They experience more extremes of mood and more swings of mood from one extreme to the other. They also experience more frequent episodes of depressed mood.

3. Risk behaviour: The young have higher rates of reckless, norm-breaking, and anti-social behaviour than either children or adults. They are more likely to cause disruptions of the social order and to engage in behaviour that carries the potential for harm to themselves and/or the people around them.

It is the incompatibility between need for independence and the fact that "parents still think of their offspring as mere children and tighen the rein where they should loosen it". Contemporary studies have established that conflict with parents increases in early adolescence, compared with pre-adolescnce, and typically remains high for a couple of years before declining in late adolescence. 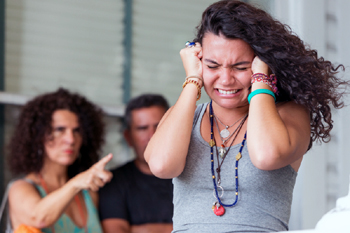 The phase of the young is the age of rapid fluctuation of moods with extremes of both elation and depressed mood. They report greater extremes of mood and more frequent changes of mood compared to pre-adolescents or adults. They exprience both positive and negative emotions but usually the negative ones. They report feelings of 'self-consciousness', 'embarassment', and also more likely to feel awkward, lonely, nervous and ignored. The mood disruptions may also be due to cognitive and environmental factors than pubertal changes.

Contemporary research confirms that teens and early twenties are the years of highest prevalence of a variety of types of risk behaviour (that is, behaviour that carries the potential for harm to self and/or to others). Most of the individuals at these phases are highly ambitious. They have an inclination to prove themselves. There may be two aspects: positive and negative. Positively, the young take risks for their career by studying hard, planning for their future, being more responsible and supporting one’s family. Negatively, the person may show risks which involves substance abuse, risky automobile driving, and risky sexual behaviour. The young generally exprience their participation in risk behaviour as pleasurable. Understandably, the young pass through such behaviour without the knowledge of their parents. There are individual diffrences as not all of the youth take part occsionally in risk behaviour of one kind or another.

Why Storm and Stress?

Biological changes contribute for some extent. The dramatic hormonal changes that accompany puberty contribute to emotional volatility and negative mood, particularly in early adolescence. But this hormonal contribution to mood distruptions appears to be small and tends to exist only in interaction with other factors. The environmental factors like peer pressure, comparing oneself with youth of one’s age, low self image, exposure to media, unrestricted engagement in social networking sites, cyber bullying contribute to storm and stress.

How to come out of storm and stress

The phase of youth is a passing but an important phase of life. The individual at this phase faces certain amount of storm and stress. Unless one is aware, adjusts and make attempts to overcome, then things may turn out to be worse. It may take a life time to set right the derailed things of one’s life. "Failing to plan is planning to fail" - This is much true for the young. So the individual has to be aware and seek proper help from those who are capable to help them. Certainly, positive social support of one’s peers play an important role at this phase. Good friends with their emotional support and belongingness help them to brush out the stress. Relying solely on them may worsen their situation as it is said ‘two blinds tread only towards the ditch’. They need the support of their parents. The young value and respect their parents even though they have dfferences with them. Along with the discipline, they also expect understanding and emotional bonding to ease out the stress.

Belongingness with their parents makes them confident and helps them to feel that they are not alone but some one is with them. As the young are idealistic i.e., they know things theoratically, parents have the obligation to make them known to them the reality. When the parents fail or find hard to guide their young then youth workers, teachers, animators or family members play the similar role.

The phase of youth is an important but challenging phase of life. There are significant risks and the individual is prone to biological, social, moral and econmic vulnerabilities. Understanding and concern by the parents and responsible adults will ease their storm and stress.

By Fr Arun Lobo
To submit your article / poem / short story to Daijiworld, please email it to news@daijiworld.com mentioning 'Article/poem submission for daijiworld' in the subject line. Please note the following:

Title: Storm and Stress of the Young